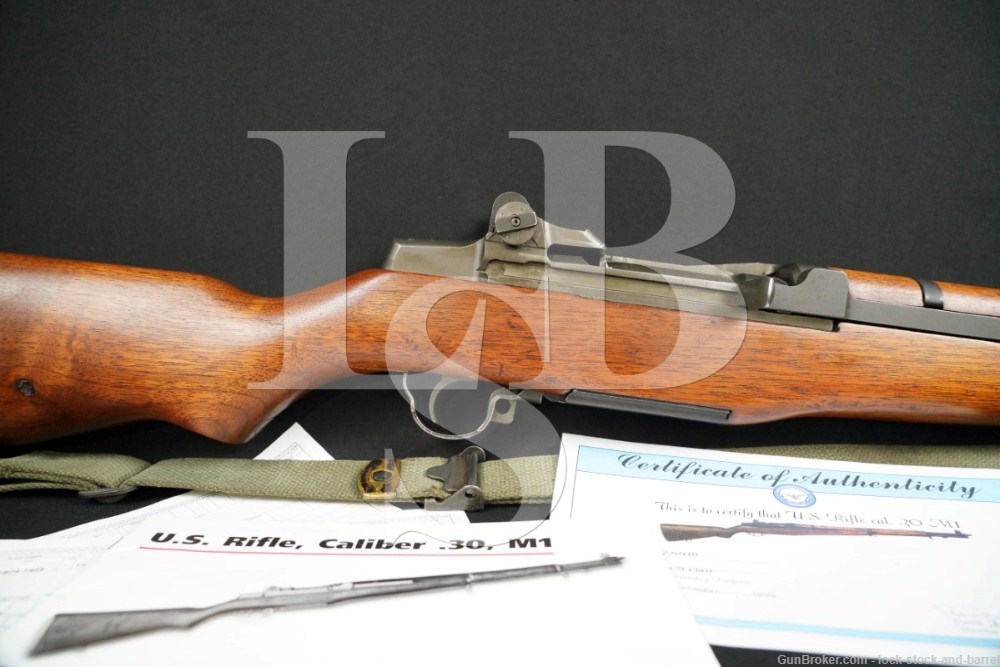 Stock Configuration & Condition: The face of the grip is marked with a “circled P” proof. The bottom of the grip is marked with a small “crossed cannons” stamp. The left side above the trigger is marked with a Springfield Armory inspector’s cartouche “SA / N.F.R in a box” next to a “crossed cannons” cartouche. The inspector’s cartouche is correct for the rifle’s serial number (page 134).
The oil stained hardwood stock has a pistol grip, metal nose caps, a stacking loop, two sling loops, and a metal buttplate with hinged door for storage in the butt. The buttplarte shows scratches, small dents and discoloration. The wood shows scrapes, scratches, and compression marks. Some of the marks have damaged small portions of the surface wood. Most of these marks have been finished over. There is a significant crack at the wrist. The LOP measures 13 1/8 inches from the front of the trigger to the back of the buttplate. The stock rates in about Fair overall condition due to the crack.

Bore Condition: The lands are bright, the grooves are light grey and the rifling is deep. There is fouling and intermittent erosion in the grooves. The fouling should clean up some. The bore shows an M.E. of 2.5. The throat shows a T.E. of 4.

Overall Condition: This rifle retains about 94% of its metal finish. The right receiver leg shows thinning where some of the new finish was removed to read the “LEAD” rebuild markings. The metal shows scuffs, light scrapes and handling marks. The gas tube and  trigger guard show light thinning. The right side of the receiver and front of the bolt show light thinning consistent with cycling. The markings are deep. Overall, this rifle rates in about Very Good Plus to Fine condition.

Box, Paperwork & Accessories: The rifle has a green canvas sling attached. It shows some discoloration on the canvas as well as scrapes, thinning and oxidation on the metal. It is in Very Good Plus condition.
The rifle comes with a Civilian Marksmanship Program (CMP) Certificate of Authenticity, a CMP invoice (3 copies) and an owners manual. The certificate and invoice lists the rifle’s serial number. The certificate, invoices and manual are in Fine condition.

Our Assessment: The U.S. Rifle, Caliber .30, M1 is known affectionately as “the Garand” after its inventor, John Garand. The rifle would become the first standard-issue semi-automatic infantry rifle in the world. While some countries entered the war with limited issued semi-automatic rifles or developed such rifles during the war, America was the only nation to enter with its Army issuing autoloading rifles on a large scale. General Patton famously referred to the rifle as “the greatest battle implement ever devised”. Millions were produced during WWII and hundreds of thousands afterward, seeing use through the Korean War and into the Vietnam War. Interestingly, while many other weapons and military items would see production contracts sent out to otherwise non-related companies, during WWII production remained with Springfield Armory and Winchester. It was only after the war that production would be contracted out to another gunmaker, Harrington & Richardson, as well as the agricultural equipment maker, International Harvester.
This Springfield Armory M1 Garand was built back in 1945. It was  Arsenal Rebuilt in August of 1964 at the Letterkenny Army Depot and is marked “LEAD / 8-64” on the receiver leg. It was eventually placed into the Civilian Marksmanship Program inventory where it was refurbished. The rifle uses all Springfield parts. In 1999 it was purchased through the Civilian Marksmanship Program (CMP). It comes with a Certificate of Authenticity and a CMP Invoice. It is a shame the stock is cracked at the wrist, but replacements are still avaliable online.