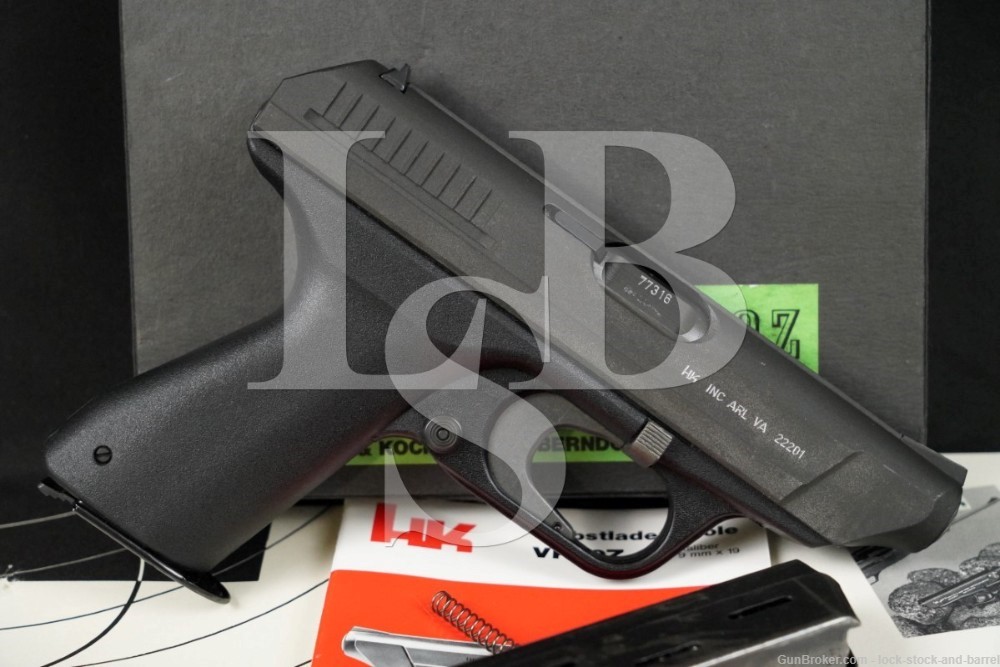 Sights/ Optics: There is a ramp with a slot for an optic at the front of the slide (the original front-sight has been removed and no front sight is included). The rear sight is a square-notch dovetailed to the slide.

Stock Configuration & Condition/ Grip: The grip is one-piece polymer integral to the frame. The grip has some light handling marks but lacks any notable defects. There are no chips or cracks. Overall, the grip is in Fine condition.

Bore Condition: The bore is mostly bright with sharo rifling. There is light erosion concentrated in the grooves.

Overall Condition: The pistol retains about 65% of its metal finish. There is scattered finish loss across the slide, some light handling marks, nicks and scuffs. The markings remain clear. Overall, the pistol is in Very Good condition.

Mechanics: The action functions correctly. The slide to frame fit is snug. The double-action trigger is smooth. We did not fire this pistol. As with all previously owned firearms, a thorough cleaning may be necessary to meet your maintenance standards.

Box Paperwork and Accessories: The pistol comes with its original foam padded box, a spare recoil spring, a test target (dated to 1980), a user manual and miscellaneous paperwork. Also included are a total of two 18-round magazines. Please note, no magazines will not be included for purchasers who reside where they cannot be legally transferred.

Our Assessment: This Heckler & Koch VP70Z is a double-action only semi-automatic pistol chambered for 9mm Luger cartridges. The VP70Z was a cutting edge design when it was released by Heckler and Koch, it was the first handgun to be manufactured with a polymer frame (the first gun made with a polymer frame was a long-gun, the Remington Nylon 66 made in 1959) and it heavily influenced the future of handguns with a number of similarities to Glocks. The gun’s initials “VP” stand for volkspistole (literally the people’s pistol), a reference to the guns simplicity in production and handling. The gun is a civilian variant of the VP70 which was made to military specifications; it was a fully automatic pistol that was configured to hold a shoulder stock (similar in concept to the Mauser C96). The VP70Z (“Z” stands for zivil or civilian) is the reconfigured VP70 made to meet civilian firearms regulations; it is a semi-automatic handgun and can not be mounted with the shoulder stock. This gun has some handling wear, but it remains mechanically sound. It is one of those pioneering designs that should appeal to fans of historically significant firearms. Good luck on your bid!