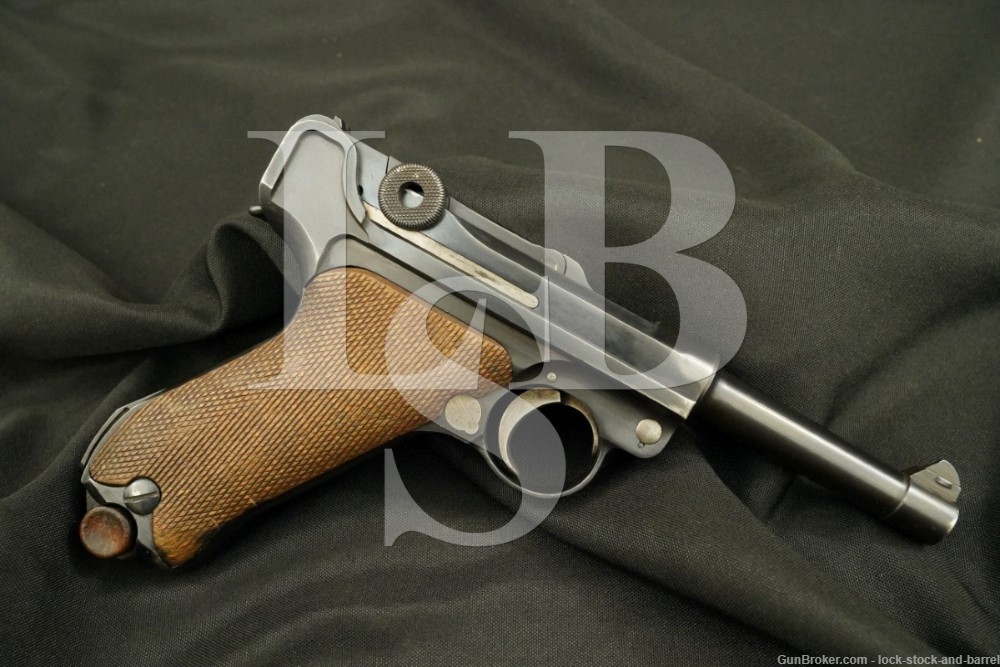 Stock Configuration & Condition: The grips are two-piece checkered wood panels. The grips show light-moderate handling wear with some scattered light nicks and scuffs. The checkering is generally well defined with most points blunted and an area worn smooth at the bottom-front corner of the right panel. There are no chips or cracks. Overall, the grips are in about Very Good condition.

Bore Condition: The bore is light gray with sharp rifling. There is scattered minor erosion in the bore.

Overall Condition: This pistol retains about 95% of its current metal finish. The finish is thinning at most edges. There is finish wear on some raised features, most notable the sideplate. There is some wear and light oxidation at the bottom of the frontstrap. There is infrequent minor erosion under the finish. Much of the strawed finish has muted. The action has light operational wear. The screw heads are lightly tool marked with strong slots. The markings are clear. Overall, this pistol is in Very Good-plus condition as refinished.

Our Assessment: The Luger pistol used by the German Army in WWI was the P.08, with a 4” barrel and chambered in 9mm. After WWI, the Treaty of Versailles banned the manufacture of pistols with a barrel length of 100mm or longer and to calibers less than 9mm. Fortunately for the Germans, they already had designs for pistols with 7.65mmx21 (.30 Luger) chambers, used in the early Lugers produced at the turn of the Century, and lots of spare parts left over from WWI production. DWM started producing pistols with 3 5/8” and 3 3/4” barrels chambered in .30 luger for foreign sales. These pistols had military-style serial markings as well as commercial markings, and some had both. Quite a few were also produced with longer barrels chambered in 9mm Parabellum, so it’s hard to tell who was enforcing the treaty requirements. This pistol was made sometime between 1921 and 1929 with a 3 3/4” barrel and chambered in .30 Luger. The pistol has commercial markings including its “GERMANY” marking which indicates it was produced for export. The pistol has its original finish and all of the serial numbers are matching. The pistol is in Very Good-plus condition as refinished with 95% of its new finish remaining. The bore is still in pretty good condition and the pistol retains strong mechanics. This will make a nice example of the 1920s commercial alphabet Luger for a collection. Please see our photos and good luck!