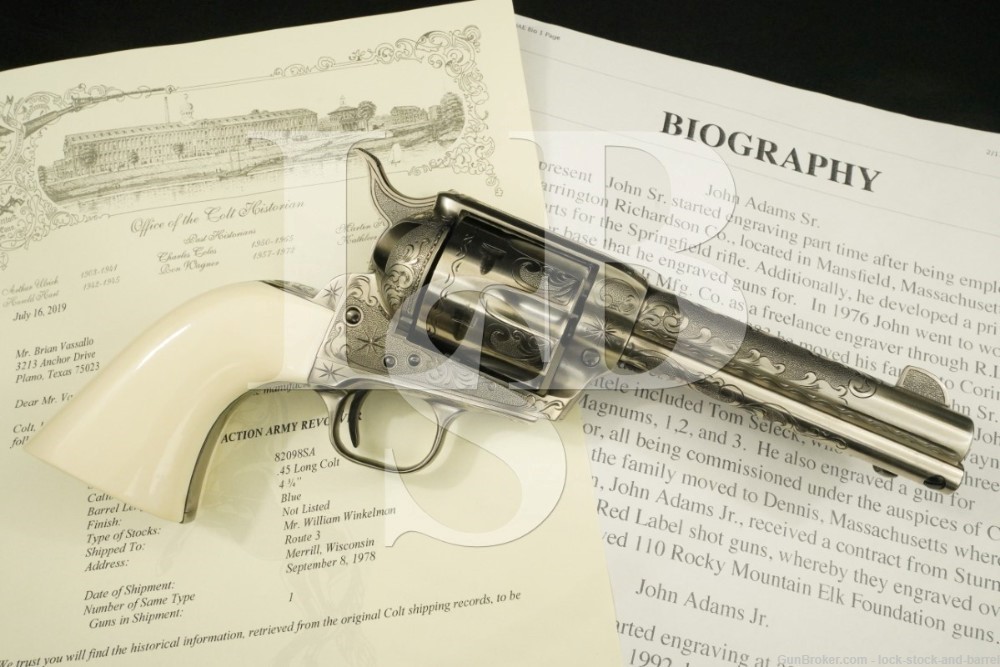 Markings: The left of the barrel is marked “COLT SINGLE ACTION ARMY .45”, the left of the frame underneath the cylinder is marked “PAT. SEPT.19, 1871 / JULY. 2, 72 JAN. 19,75” followed by a rampant colt. The left of the trigger guard is marked with the “VP” proof triangle at the front and “2” at the back.  The underside of the frame is marked “82098SA”. The top of the barrel is marked “COLT’S PT. F.A. MFG. Co. HARTFORD CT. U.S.A.”. The front face of the cylinder is marked “2098”. Under the grips the left side of the frontstrap and left side of the backstrap are both marked “82098SA”, the left of the frontstrap also has “85683” struck-out. The inside of each portion of the grip has “761” and “Willy Bs / Customs” hand-written. The front face of the frame is signed “J. ADAMS”. There is foliate scroll relief engraving on the barrel, frame, hammer, cylinder and grip frame with negative spaces filled with punch-dots and starburst motifs. The factory markings have been well preserved and are incorporated well into the engraving with borders around the left-side barrel and frame markings.

Stock Configuration & Condition: The grip is a Willy B’s Customs one-piece bone grip. There is a scratch on the bottom face of the right portion of the grip. Otherwise, there is no notable wear or damage, only light handling marks. There are no chips or cracks. The grips are generally well fit to the profile of the frame, but there are minor grips to the frontstrap and the grip has minor play to the frame which could be shimmed up for a tighter fit. Overall, the grip is in Fine-plus condition as not original to the gun.

Type of Finish: Most exposed surfaces are silver plate. There is dark finish on the muzzle, in the topstrap groove, the top and rear face of the hammer, and internal surfaces, as well as the ejector and most screw heads.

Overall Condition: This handgun retains about 96% of its current metal finish. Most notable is a patch of small nicks on the bottom of the barrel in front of the cylinder pin head. The cylinder shows minor turn wear with small spots of flaking in a couple of flutes and at a few of the stop-notches. There are some other scattered minor nicks, scuffs and swirls. The screw heads are sharp to lightly worn with strong slots. The markings are clear. Overall, this handgun rates in Fine-Excellent condition as refinished.

Mechanics: The action functions correctly. The cylinder locks up with barely perceptible rotational play and no end-shake on each chamber. We did not fire this handgun. As with all used firearms, a thorough cleaning may be necessary to meet your maintenance requirements.

Box, Paperwork & Accessories: This revolver comes with a Colt Historian letter which confirms that this revolver originally shipped September 8, 1978 to William Winkelman (Bill’s House of Guns) in Merill, Wisconsin as the only gun of its type in the shipment.

Some changes were incorporated in an effort by Colt to keep prices down. One new change was a pressed-in cylinder pin bushing instead of the removable ones used in 1st and 2nd Generation cylinders. Also, the ratchet at the rear of the cylinders was re-shaped, which also necessitated a different shape on the rotating hand. And for some unknown reason, the pitch of the barrel’s threads was changed from the 20 threads per inch (TPI) as used on 1st and 2nd Generation SAAs to 24 TPI for these new ones. The introductory caliber for 3rd Generation SAAs was .45 Colt, but other chamberings would soon follow.

Everyone should have a Colt Single Action Army, and this would be a beauty to add to any collection. Manufactured in 1978, this revolver was originally sold to a firearms dealer in Wisconsin, Bill’s House of Guns. Since then, it has been to noted engraving John Adams as well as having grips installed from Willy B’s Customs. John Adams worked as a freelance engraver for Colt’s starting in 1976. Adams was selected by Ruger to engrave some 400 Red Label shotguns, engraved many guns for the Rocky Mountain Elk Foundation, and has done work for notable customers such as Tom Selleck and Sammy Davis Jr. This classic Single Action Army chambered for a classic cartridge is a nice example of Adams’ work, with an old-west feel and a beautiful overall appearance. It will make a fine addition to any collection in America. Please see our photos and good luck!