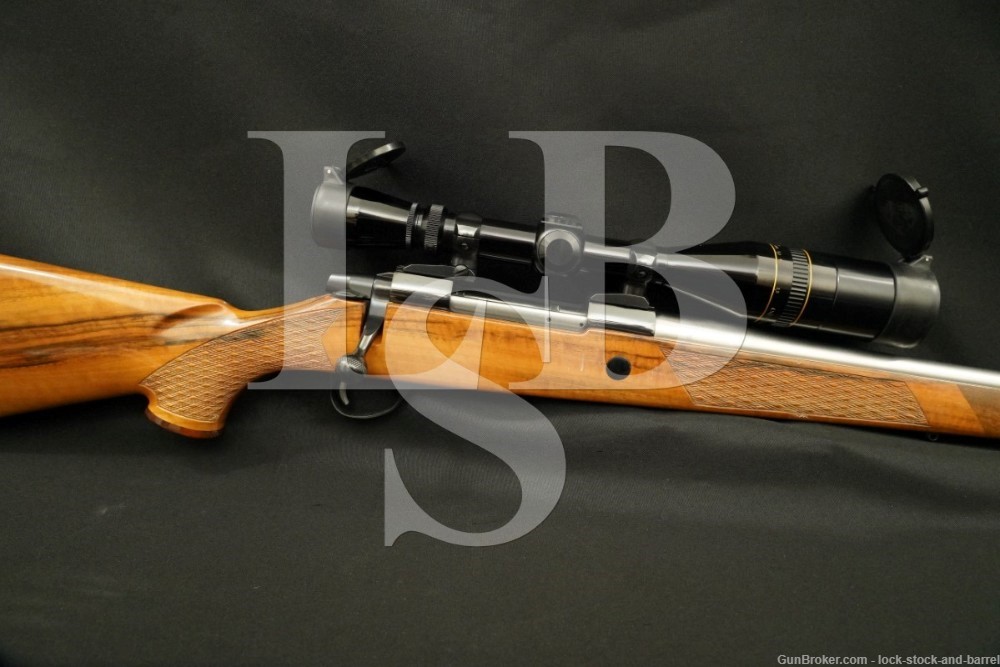 Markings: The left side of the shank is marked “25-06 REM”, the right side is marked “RR”. The left of the receiver is marked “AIII 553086” and with two proof/inspection marks. The bottom of the bolt handle is hand-scribed “086”. The floor plate shows an elk’s head with foliate motifs surrounding it. The trigger guard also has foliate motifs.

Sights / Optics: There are no provisions for iron sights. The top of the receiver is equipped with a Leupold Vari-X II with 4-12x magnification and a duplex reticle. The scope shows light wear and the lenses are clear. The scope rates in about Fine-Plus overall condition.

Stock Configuration & Condition: The stock is one-piece walnut with skip-line checkering, rosewood capped forend and pistol grip, fluted monte carlo comb with cheekpiece, brown Sako ventilated recoil pad, and sling studs front and rear. There is a white inlay in the grip cap in the shape of a bear’s head. There are some scuffs around the grip and cap. There are marks through the finish along the edge of the cheek piece. There are some scuffs and compressions on the right side of the sorend and front of the pistol grip. The checkering is sharp with a minor interruption or two on the right side of the grip. There are no chips or cracks. The LOP measures 13 3/4? & 12 7/8” from the front of the trigger to the back of the recoil pad and wood, respectively. The pad is supple and shows light material loss at the toe. Overall, the stock is in about Very Good-Fine condition.

Overall Condition: This rifle retains about 96% of its metal finish. There are some faint scratches on the barrel. There is light operational wear on the bolt. The screw heads range from sharp to tool marked with strong slots. The markings are clear. Overall, this rifle is in about Fine-Plus condition.

Mechanics: The action functions correctly. The trigger is light and crisp. We did not fire this rifle. There is a bolt release on the left side of the receiver and a safety on the right side that locks the bolt handle as well as the trigger. As with all used firearms, a thorough cleaning may be necessary to meet your maintenance standards.

Our Assessment: Sako first started making rifles with FN Mauser actions in 1951. By 1961 they had settled on 3 different length actions. The AIII was the original long action and equivalent of the L61R. The tang of the AIII was slightly lengthened after just a couple of years of production and it was renamed the A-V. The rifle is in about Fine-Plus condition with 96% of its blue finish remaining and light wear in its stock. The bore is bright with sharp rifling and no erosion. The .25-06 Remington had been a wildcat cartridge for half a century before being standardized by Remington in 1969. It is based on the .30-06 Springfield cartridge necked-down (case opening made narrower) to .257 caliber with no other changes. .25-caliber bullets typically have high ballistic coefficients without being heavy. This characteristic, when combined with the large case capacity of its parent .30-06 case, allows relatively high muzzle velocities without heavy recoil. The combination of high ballistic coefficients with high muzzle velocities give the .25-06 a very flat trajectory as well as retaining kinetic energy down-range. The .25-06 is generally considered to be a good round for medium-sized game such as deer and antelope because of its combination of substantial kinetic energy and moderate recoil. This rifle ought to make for a great hunting rifle for the lucky winner and won’t do too bad on the target range, either. Please see our photos and good luck!