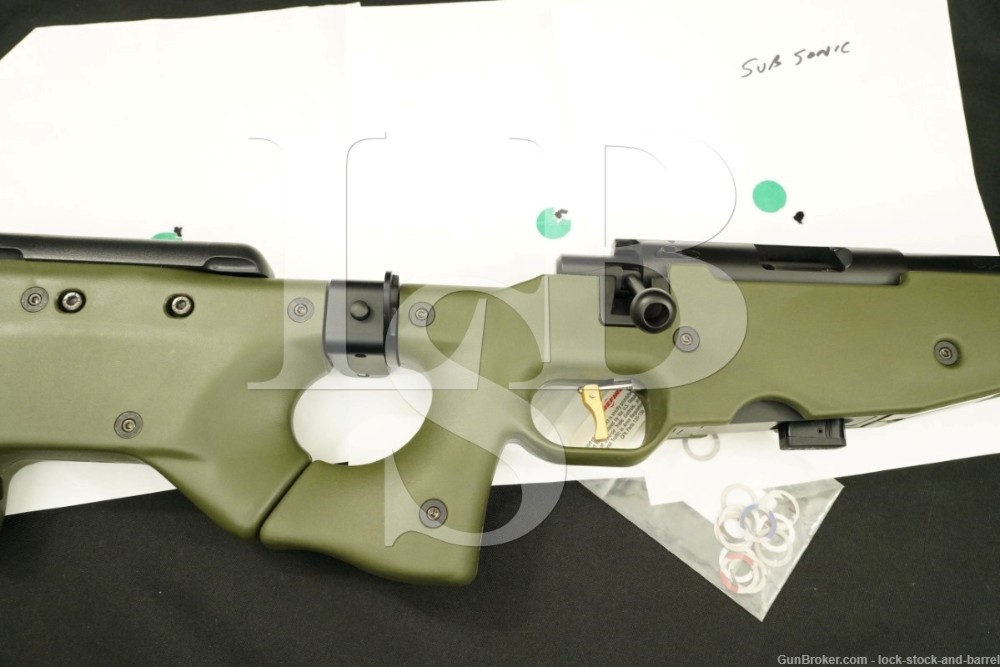 Year of Manufacture: Built in 2011 by G.A. Precision

Sights / Optics: There is no provision for iron sights. The top of the receiver has a male dovetail for mounting optics.

Stock Configuration & Condition: The olive green Accuracy International AICS 2.0 stock has a thumbhole grip, folding buttstock, adjustable comb height, multiple sling attachment points, an inlaid accessory rail on the bottom, a hole for a bipod mount at the nose of the forend, and a black rubber buttpad with length of pull spacers for adjustment. There are a few scattered light handling marks and a few little scuffs. There are a  couple of gaps between the two sides of the stock, most noticeable on the trigger guard. The LOP measures approximately 14 5/8? from the front of the trigger to the back of the solid black rubber AI recoil pad. The recoil pad exhibits some light wear from use and general handling wear. The stock rates in about Fine Plus overall condition.

Overall Condition: This rifle retains about 99% of its metal finish. There is light handling wear. There is standard operational wear. The screw heads are sharp. The barrel markings are clear, the receiver markings are faint and hard to see. Overall, this rifle rates in about Excellent condition.

Mechanics: The action functions correctly. The rifle is installed with a CG Jackson trigger. The trigger has a smooth takeup followed by a crisp break. We did not fire this rifle. As with all used firearms, a thorough cleaning may be necessary to meet your maintenance requirements.

Box, Paperwork & Accessories: Included is the original invoice from G.A. Precision, test targets, and a 10 round Sako magazine.

Our Assessment: The AW or Arctic Warfare is a family of sniper rifles from the British company Accuracy International. It is used by militaries and police all over the world and is the basis of the British L115A3 sniper system which was used to make one of the longest confirmed kills in history at 2,707 yards. The rifles are chambered in calibers such as .308, .300 Win. Mag., and 338 Lapua, but what if you wanted a smaller caliber for target shooting and your targets aren’t armed with AKMs or miles away? Keystone Arms released an AW look alike but it was a smaller youth rifle not geared towards adults or serious shooters. Enter this custom build by GA Precision, it has a Hall Action, Bartlein barrel, AICS 2.0 stock, and a CG Jackson trigger. Hall Manufacturing was started in 1977 by Allan Hall to build custom actions and Mr. Hall has over 25 years of experience in designing and building actions. In addition to some of the best actions on the market has also built match barrels, triggers, fit and chambered, and built complete rifles, certainly no stranger to premium parts. This experience has allowed Hall Mfg. to build actions that have won Bench Rest matches at National levels of competition. Pair that with a Bartlein No. 7 contour barrel and you have are already combining components from the best of the best. With such good parts, it only makes sense to have one of the best custom services build the rifle, a top builder such as G.A. Precision. G.A. Precision was founded by George Gardner as a means of building competition rifles for local highpower and long range shooters. G.A Precision knows how to build a rifle, they currently build rifles for a multitude of police agencies, to include: FBI SWAT, FBI HRT Team Quantico, ATF SRT, Chicago P.D. SWAT and many more. All of these features combined make for a one of one rimfire styled off of the iconic Arctic Warface sniper that promises to be a tack driver. This rifle comes with one magazine to get you started and has hardly any wear, all you need to do is install rings and your favorite optic. This is an awesome rifle you don’t want to miss out on, drop a bid today. Please see our photos and good luck!