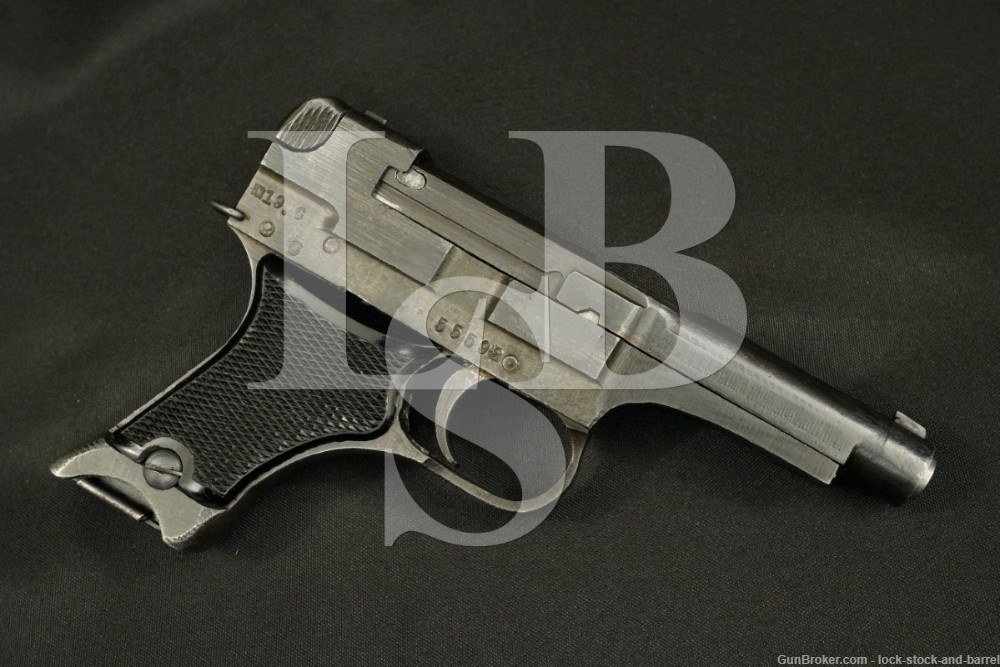 Markings: The left side of the frame above the trigger has 3 Japanese characters (model designation). The right side of the frame has is marked with the character Sho and the date “19.6” indicating the 19th year 6th month of Hirohito’s reign, or June, 1944, over a Nagoya Arsenal upside down “8” in a circle followed by the Japanese character for “Nam” (for Lt. Gen Kijiro Nambu, one of the founders of the Nambu Rifle Manufacturing Company, the predecessor to Chuo Kogyo.). The right side of the frame above the trigger is marked “55592”. The bottom of the slide lug, the left of the barrel lug, the bottom of the locking block, the left of the bolt, the bolt cross-pin, the bottom of the firing pin and the rear of one magazine at the bottom are each marked “592”. The final digit “2” is over-stamped on the frame and locking block. There are a few other scattered small inspection marks.

Sights / Optics: The front sight is a short post style blade fixed to the top of the slide. The rear sight is a square notch integral to the top rear of the frame.

Stock Configuration & Condition: The grips are two-piece checkered black bakelite panels. The exposed portions of the grips show minor handling wear with only a few light marks and generally sharp checkering. The thin portions at the top which fit inside the frame and at the bottom which sit under the screw heads have some losses, concealed when the grips are installed. There are no cracks. Overall, the grips appear in Fine condition but rate Very Good due to the concealed losses.

Bore Condition: The bore is mostly bright with well rifling. There is infrequent light erosion in the bore, mostly at the muzzle-end.

Overall Condition: This pistol retains about 92% of its metal finish. This pistol has a typical rough late war finish, but the finish is generally strong throughout. The finish is thinning at some edges. The finish is thinning in the grip areas. There are a few light nicks, scuffs and scratches which blend well with the rough finish. The action shows light operational wear. The screws are tool marked with strong slots. The markings are clear. Overall, this handgun rates in Very Good-Fine condition.

Mechanics: The action functions correctly. The slide has minor play to the frame. The safety is pushed up for safe and down for fire. We did not fire this handgun. As with all used firearms, a thorough cleaning may be necessary to meet your maintenance standards.

Box, Paperwork & Accessories: The pistol comes with a single 6-round magazine. The blued, serial-matching magazine has a similar late-war finish, showing light operational wear, intact feed lips and a strong spring. There is a short, thin crack at the bottom of the spine.

Our Assessment: The Type 94 Nambu is an odd-looking pistol but was popular with the Japanese troops because it was smaller and lighter than the Type 14. It was issued to tankers, pilots and others who had to work in cramped quarters. It was originally designed as a military sidearm, and never intended for civilian sales. Like other Nambu pistols, it is chambered for 8mm Nambu. This pistol was made by the Chuo Kogyo company under the supervision of the Nagoya Arsenal in June, 1944. The pistol comes with something we don’t see very often – a magazine serialized to the pistol. This pistol is in Very Good-Fine condition with about 92% of its original finish remaining. The bore is mostly bright with well defined rifling and the mechanics are strong. The overall appearance is consistent with the time this pistol was manufactured. By June in 1944, the Japanese were decidedly on the back foot in the Pacific. The month would see the “Great Marianas Turkey Shoot”, effectively destroying the Japanese naval air power and severely crippling the Imperial Japanese Navy. The previous month had seen the Japanese attempt to invade India fail and come to an end. The rough machining and polishing is a result of Japan’s efforts to cut corners, speed production, and do everything possible to continue the fight despite the outcome being all but certain, and not in their favor. This pistol should be a big hit with the collectors of Japanese weaponry and of military weapons used in WWII.