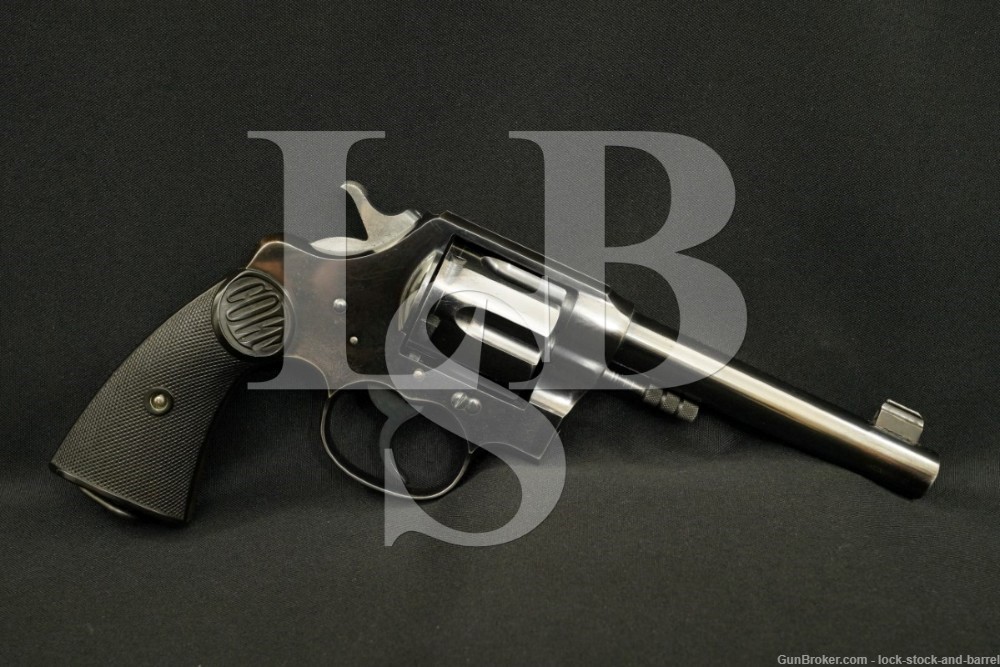 Sights/Optics: The front sight is a replacement Marbles beaded blade with white dot in-line dovetailed to a post on the top of the barrel. The rear sight is a u-notch integral to the top strap.

Stock Configuration and Condition: The grips are two-piece checkered black hard rubber panels, both of which have “COLT” in oval at the top. Lower edges have a few light nicks. There are no cracks and the checkering is well-defined. Overall, the grips rate in Good-plus condition.

Bore Condition: The bore is still quite bright and the rifling is well-defined. There is no erosion, but a bit of stubborn fouling can be seen down the length.

Overall Condition: This handgun retains about 88% of its metal finish. The barrel has scattered minor nicks and scuffs and a few areas of light finish loss most notably along the left side where light holster wear becomes evident. The frame has light scuffs throughout along with minor thinning on most edges. The cylinder has light thinning on most edges as well along with scattered minor nicks and a distinct turn line. There is moderate operational wear under the cylinder release. The front strap has shifted to a light patina and there is some moderate finish loss in that area. The screws and pins have minor tool marks with strong slots. All markings are clear. Overall, this revolver rates in Very Good-plus condition.

Mechanics: The action functions correctly. The double action is smooth. The single action is light. We did not fire this revolver. As with all used firearms, thorough cleaning may be necessary to meet your maintenance requirements.

Our Assessment: The Colt New Service is a large frame, large caliber, double-action revolver made by Colt from 1898 until 1941. Made in various calibers, the .45 Colt version with a 5 1/2″ barrel, was adopted by the U.S. Armed Forces as the Model 1909. At the time, the Webley was a standard sidearm in the British Empire, but officers were expected to purchase their own, which more often than not was Colt’s New Service revolver. This example is chambered for .455 Eley and is in overall Very Good-plus condition with far less wear than we’re used to seeing, the bore is still rather bright, and mechanically it is sound. Good luck and happy bidding!