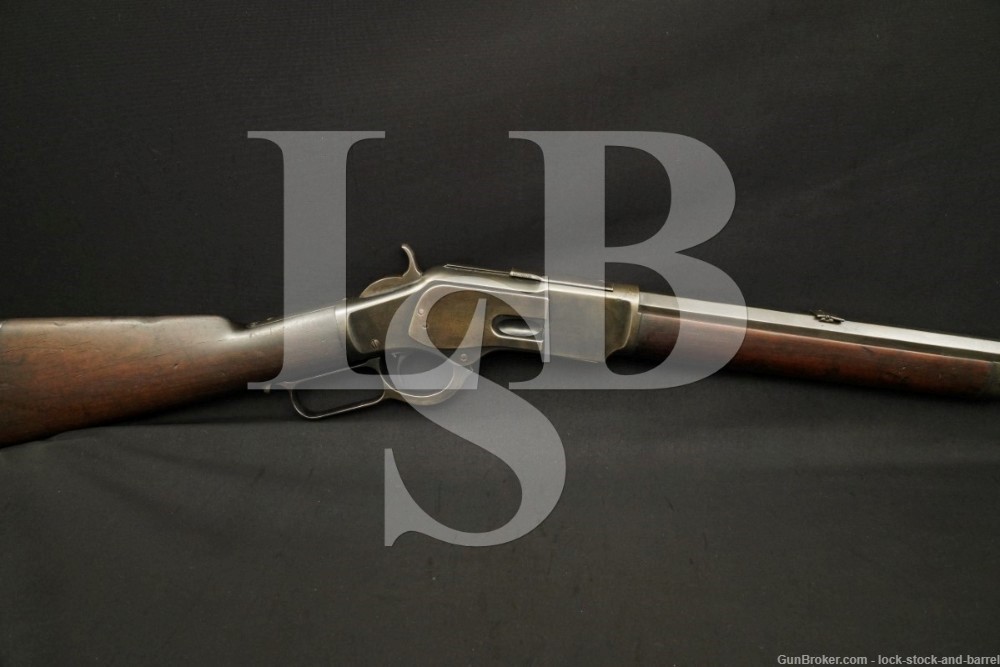 Stock Configuration & Condition: The stocks are two-piece smooth walnut with capped forend, straight grip, straight comb, and steel crescent buttplate with a sliding brass door covering a storage compartment in the butt (there is nothing in the storage compartment). The stocks have several scattered nicks, dings, scuffs and scratches. The forend has a patch-repair along the top-left edge toward the front. There are some notable deep dings along the comb which have been finished over. The buttstock has grain lines opening up from age and weathering, but there are no cracks at edges as from wear or impact. The LOP measures 12 3/4? from the front of the trigger to the back of the buttplate. The plate has gone to a moderate patina with scattered wear and surface erosion. Overall, the stocks are in Good-plus condition as refinished and repaired Antique.

Bore Condition: The bore is gray and the rifling is worn, but visible. There is scattered erosion and pitting in the bore.

Overall Condition: This rifle retains about 65% of its current metal finish. There are scattered areas where the finish is worn, nearly to white in some places. It is not clear if this is an intentional “antiqued” appearance. There is light surface erosion scattered throughout with some patches of light-moderate pitting. There are some scattered nicks, scuffs and scratches. The action shows operational wear. There are tool marks around some screw heads. The screw heads range from sharp to disfigured with useable slots. The markings are worn, but legible. Overall, this rifle rates in Good condition as refinished Antique.

Mechanics: The trigger will not properly set. Otherwise, the action functions properly and the trigger functions normally when not set. We did not fire this rifle. As with all used firearms, a thorough cleaning may be necessary to meet your maintenance requirements.

Our Assessment: One of the most successful, and certainly one of the most famous Winchester rifles was the Winchester Model 1873, known as “The Gun that Won the West” for its predominant role in the hands of Western settlers. The Model 1873 had a steel frame that was much stronger than the brass framed Model 1866, allowing Winchester to develop a family of powerful new cartridges, with Colt usually producing Single Action Army revolvers in the same calibers shortly after they were developed. The .44-40 Win. cartridge, also known as the .44 WCF, was introduced by Winchester in 1873 as Winchester’s first metallic centerfire cartridge with a number of WCF cartridges to follow including the .38-40. Colt produced single action revolvers chambered for the Winchester cartridges as well, allowing users to have a rifle and handgun which shared the same ammunition. The 1873 has a mythic status among both firearms enthusiasts and fans of the Old West in general, even inspiring the 1950 movie “Winchester ’73” starring Jimmy Stewart.

The .44-40 Win. cartridge, also known as the .44 WCF, was introduced by Winchester in 1873 as the original chambering for this model. It was very popular in its day and still has a devoted following today among fans of the American West as well as Cowboy Action Shooting competitors.

This Model 1873 Rifle was made in 1888 and looks like it served generations well and survived through them in fairly good shape. A previous owner has refinished the metal and repaired the wood. It is unclear if the finish was intentionally “antiqued” or if the wear in the new finish was acquired honestly. The rifle also has a single set-trigger, though it needs some work before it will function properly. In any case, this would be a nice rifle to add to a Winchester collection missing the classic Model 1873. It would also be an excellent candidate for restoration.