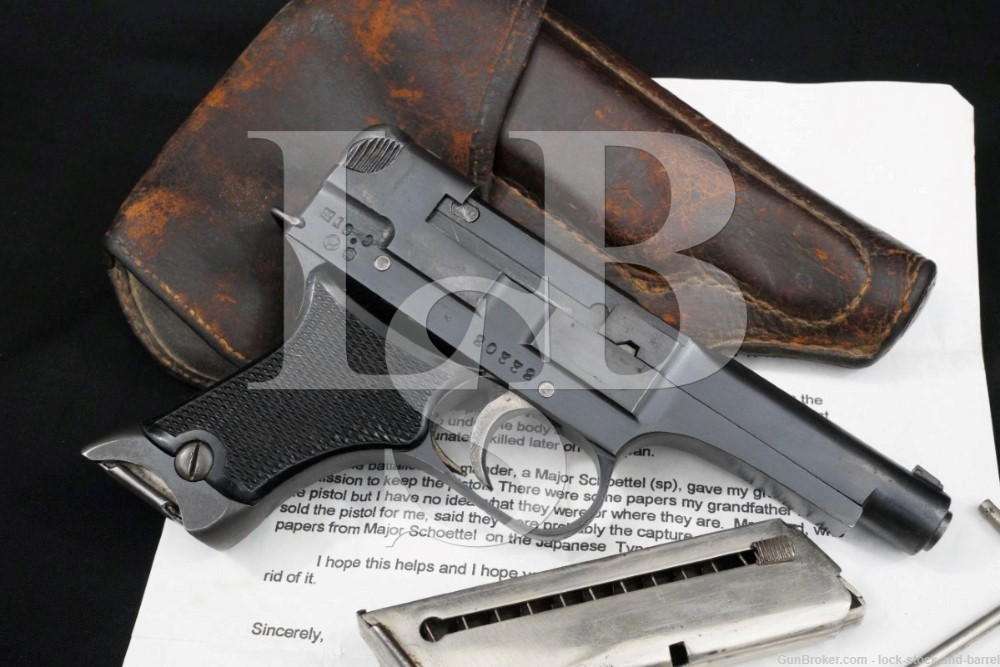 Markings: The left side of the frame above the trigger has 3 Japanese characters (model designation). The right side of the frame at the rear is marked with the character Sho and the date “16.9” indicating the 16th year 9th month of Hirohito’s reign, or September 1941, over the symbols for Nambu and the Nagoya Arsenal. The right of the frame above the trigger is marked with the serial number “20332”. The indexing lug of the slide, the left of the bolt, the bottom of the firing pin, left of the barrel lug, bottom of the locking block, and the crossbolt are each marked “332”. The rear of the magazine at the bottom is marked “332” (see Box, Paperwork & Accessories, photos) and the other magazine is marked “441” at the same location, each has a small Japanese character marked below. There are some other small Japanese inspection marks on the pistol. The inside of the left grip panel has “RT” roughly hand-scribed, the inside of the right panel has “RAT”. The right of the frame has “R TIGHE” hand-scribed on the rear raised panel.

Stock Configuration & Condition: The grips are checkered black bakelite panels. The grips have minor handling wear with some scattered light nicks, scratches and scuffs, mostly in the smooth borders. There are tool marks around the grip screws. The checkering is well defined. The thin tab at the top of the right panel which fits inside the frame has a small loss, concealed when the grips are installed. There are no cracks. The grips rate in Very Good overall condition.

Bore Condition: The bore is semi-bright with well defined rifling. There is some scattered minor erosion in the bore with one spot of more notable erosion in the top of the bore about mid-way down.

Overall Condition: This pistol retains about 87% of its metal finish. The finish is thinning at some edges. The grip areas show light handling wear and minor surface oxidation. There is some other scattered minor oxidation, but it is mostly in the grip areas. There are tool marks on and around the cross-bolt and the sear-pin. There are a few other scattered light nicks, scuffs and scratches. The action shows light operational wear. The screw heads show tool use with serviceable slots. The markings are clear. Overall, this handgun rates in Very Good condition.

Mechanics: The action functions correctly. The slide has minor play to the frame. The safety is pushed up for safe and down for fire. We did not fire this handgun. As with all used firearms, a thorough cleaning September be necessary to meet your maintenance standards.

Box, Paperwork & Accessories: This pistol comes with a brown leather flap-holster, a cleaning rod, a total of two magazines and a letter from a previous owner. The holster has had “R TIGHE” hand-carved in the belt-loop. The holster shows moderate wear and discoloration, with some fraying at the ends of the stitching where the flap is attached to the body. Otherwise, the stitching is intact. The serial-matching magazine’s marking appears to have had a previous marking removed and the current serial marking added. This magazine shows light operational wear, scattered surface oxidation, intact feed lips and a strong spring. The other magazine has minor wear and infrequent spots of minor oxidation, but also has intact feed lips and a strong spring. The letter is signed by an Emily Tighe Robinson and states that the pistol was obtained by her grandfather, Richard Tighe at Tarawa after the fighting on Betio Island. She states that he told her it was taken from a Japanese air officer or pilot and the second magazine was recovered underneath a body.

Our Assessment: The Type 94 Nambu is an odd-looking pistol but was popular with the Japanese troops because it was smaller and lighter than the Type 14. It was issued to tankers, pilots and others who had to work in cramped quarters. It was originally designed as a military sidearm, and never intended for civilian sales. Like other Nambu pistols, it is chambered for 8mm Nambu. This pistol was made by the Chuo Kogyo company under the supervision of the Nagoya Arsenal in September of 1941, right around the middle of production. By this time, Japan had joined the Axis powers and had been at war on the Chinese mainland for four years. While they were still a few months from launching their attack on Pearl Harbor, timed to coincide with invasions all across the Pacific and Southeast Asia, they were laying ground work. In March, Japanese spy Takeo Yoshikawa had arrived in Hawaii to begin scouting the American Pacific Fleet, in April the Japanese had signed a Neutrality Pact with the Soviet Union to secure their Northern flank. Japan would go on to invade and occupy French Indochina, leading to the seizure of all Japanese assets in the US and a US oil embargo of Japan. According to the included letter from a previous owner, this pistol served through the war and ended up on the island of Betio in the Tarawa atoll where it was picked up by a USMC Private, Richard Tighe. The Battle of Tarawa shocked both US troops and Americans on the homefront. Previous landings were typically not directly opposed, with island fighting happening further inland. In contrast, Beito island had been systematically fortified for nearly a year with the specific purpose of either preventing an amphibious landing force from making it out of the water, or else to pin them on the beach. Over the course of 76 hours, nearly all of the 4,500 occupants of the island, a mix of Japanese troops and workers as well as Korean forced labor, were killed and of the 18,000 Marines who were part of the invasion, more than 1,000 were killed and more than 2,000 wounded. This outcome outraged Americans back home, who felt that the losses for such a small island were unjustified. American forces learned valuable lessons from the landings at Tarawa, both about their own strategies but also about the iron resolve of their Japanese opponents. This pistol’s connection to the “stinking little abattoir of an island”, as it was described by Chicago Daily News war correspondent Keith Wheeler, will certainly make it a cherished addition to any collection, and a reminder of the sacrifices made by Marines like Pvt. Richard Tighe in World War 2. Please see our photos and good luck!