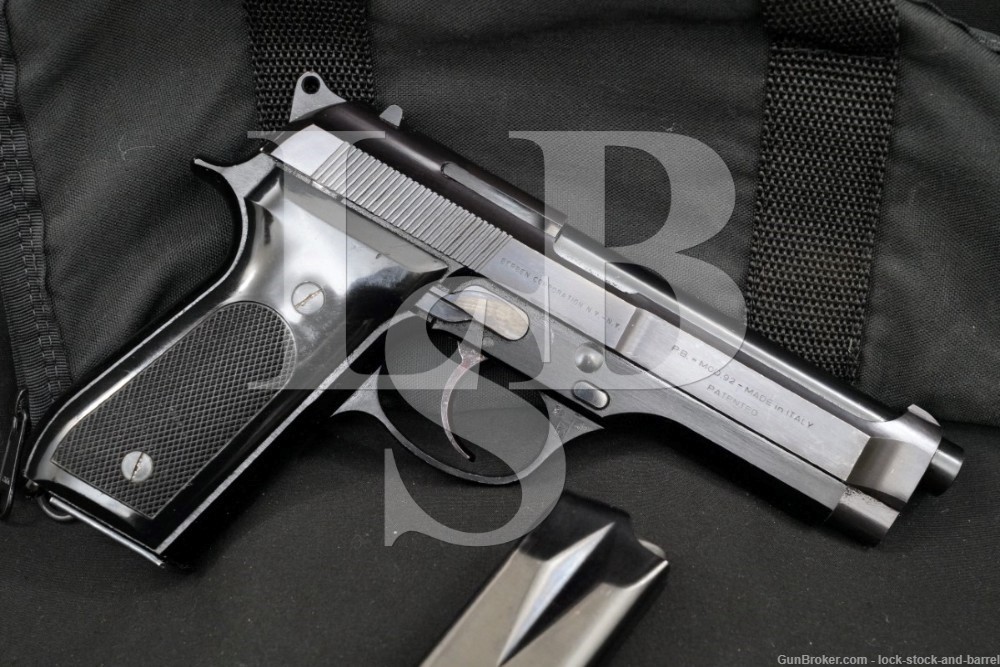 Bore Condition: The bore is mostly bright with sharp rifling. There is no erosion in the bore, but there is some stubborn fouling.

Overall Condition: The pistol retains about 95% of its metal finish. There are some scuffs, nicks and handling marks on the metal surfaces of the pistol. Notably, the leading edges have some finish loss and there is a scratch on the left slide flat in front of the step. There are scattered tiny marks through the finish on the frame. The markings remain clear. The screwheads are serviceable. Overall, the pistol is in Very Good condition.

Mechanics: The action functions correctly. The slide to frame fit is snug. The single-action trigger is crisp and the double-action is smooth. We did not fire this pistol. As with all previously owned firearms, a thorough cleaning may be necessary to meet your maintenance standards.

Box Paperwork and Accessories: The pistol comes with a total of two 15-round magazines and a soft case for transporting the gun. The magazines have some light handling wear but both remain in Very Good condition. Please note, no magazines will be included for buyers who reside where they cannot be legally transferred.

Our Assessment: This Beretta Model 92 is a single and double-action semi-automatic pistol chambered for 9mm Luger rounds. The pistol is an icon today, a later variant was selected as the standard issue firearm for the U.S. military 1985. This is a very early production Model 92 from 1977, made only a few months after production began. Early features of the pistol include a “step” slide, frame-mounted thumb safety and a magazine release at the bottom-rear of the frame on the left. The step-slide indicates that this was one of the first few thousand 92s produced, as it was the first feature to change on the model. Despite the modifications made to the model 92 resulting in the US military issued M9, this handgun is still a solid workhorse with a sleek finish that remains mechanically sound. Beretta is currently the oldest manufacturer of firearm components in the world, the company manufactured arquebus barrels which were supplied to the Venetian fleet that defeated the Ottomans during the Battle of Lepanto in 1571. The company remains one of the most prestigious firearms manufacturers in the world, and this pistol is an example of the quality firearms the company is renowned for. This is one Beretta you do not want to miss out on!