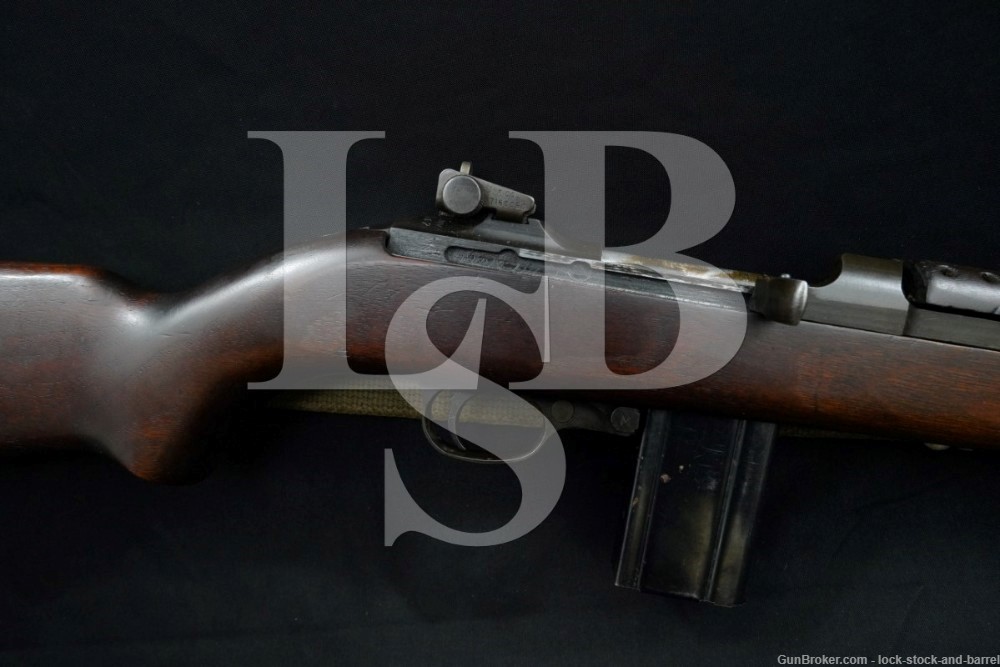 Model: M1 Carbine. This rifle is one part short of being a “matching” rifle. The rear sight is a USGI replacement. The magazine is made by a different manufacturer.

Stock Configuration & Condition: The stock has a pistol grip, Type II barrel band with sling loop, sling well, sling pass through, and a metal buttplate. The buttplate shows scrapes, discoloration from oxidation, and an area of surface erosion. The barrel band shows discoloration from oxidation and light scrapes. The wood shows several scrapes, scratches and compression marks. Most of the marks are light. A few of the marks have damaged small areas of the surface wood. These marks have been oiled over. The LOP measures 13 ¼ inches from the front of the trigger to the back of the buttplate. The stock rates in about Very Good Plus overall condition.

Bore Condition: The bore is bright; semi bright near the muzzle. The rifling is sharp. There is fouling and intermittent light erosion at the muzzle. The fouling should clean up some. The bore shows an M.E. of 0.5.

Overall Condition: This rifle retains about 89% of its metal finish. The left side of the receiver shows light thinning under the wood. The metal shows scuffs, light scrapes, and a few small scratches. The metal also shows discoloration from oxidation and oil residue. The right side of the receiver and the bolt show thinning from cycling. Most of the markings are deep. A few part markings are lightly struck. Overall, this rifle rates in about Very Good Plus condition.

Box, Paperwork & Accessories: The rifle comes with an unmarked green canvas sling. The canvas shows soiling and the metal shows scrapes. It is about Very Good Plus condition. The rifle also comes with a 15 round magazine. It shows scrapes, thin scratches, and areas of oxidation. It is in about Very Good condition.
The 15 round magazine is not available to residents of California or any other state with magazine capacity restrictions.

Our Assessment: This Inland M1 Carbine was made back in 1944. It is one part short of being a “matching” rifle. The rear sight is a USGI replacement. This WWII rifle shows just the right amount of distress to indicate its wartime service. The bore is strong & bright and the rifle has lots of Inland markings on the metal & wood. The magazine was made by a different manufacturer, but Inland magazines are readily available. This is a good looking M1 Carbine that will add nicely to your WWII collection.