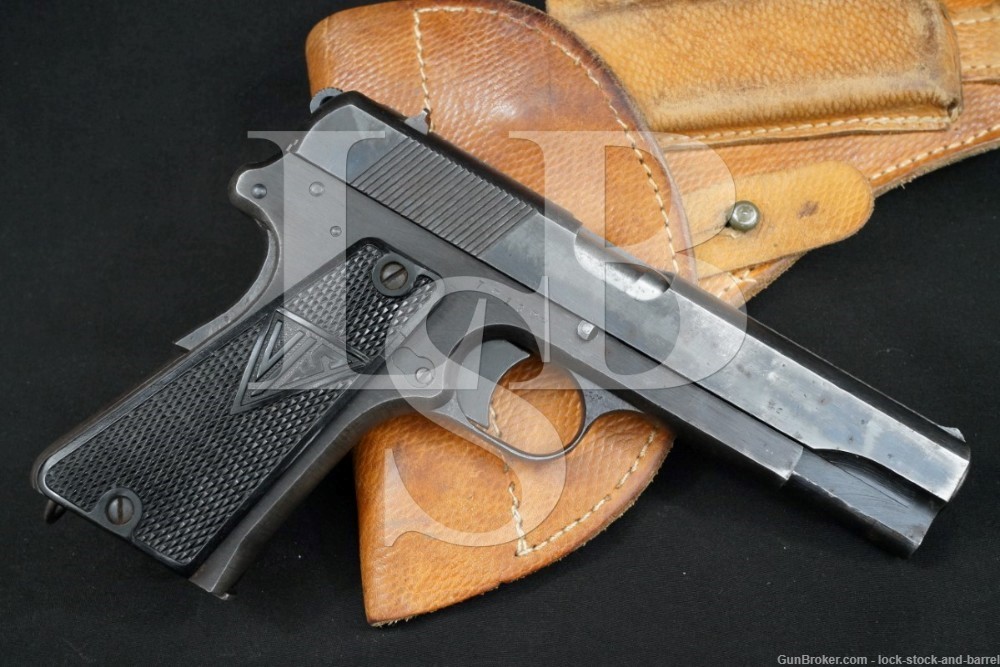 Sights / Optics: The front sight is a short narrow blade integral to the rib on the slide. The rear sight is a “V” notch dovetailed into the slide. There is a thin narrow rib running down the center of the entire length of the slide with a finely checkered finish.

Stock Configuration & Condition: The grips are two-piece checkered black plastic panels. The left panel has “FB” in triangle and the right has “VIS” in triangle. The grips have light handling wear with a few scattered light nicks and scuffs. There are a few light tool marks around the screw-holes. The checkering is well defined. There are no chips or cracks. Overall, the grips are in Very Good-plus condition.

Bore Condition: The bore is light gray with sharp rifling. There is light erosion scattered through the bore.

Overall Condition: This handgun retains about 70% of its metal finish. The balance is mostly in handling wear in the grip areas and scattered light surface oxidation. There is some surface erosion in the frontstrap. The finish is thinning at all edges. There are some scattered nicks, scuffs and scratches. There are scattered small spots, some are nicks, some are pinprick erosion, and some may be forging flaws. The action shows operational wear. The screw heads range from sharp to tool marked with strong slots. The markings are generally clear, some are poorly struck. Overall, this pistol is in Good-plus condition.

Mechanics: The action functions correctly. The trigger is crisp and the slide has minor play to the frame. There is a de-cocker on the slide and a grip safety. We did not fire this handgun. As with all used firearms, a thorough cleaning may be necessary to meet your maintenance standards.

Box, Paperwork & Accessories: This pistol comes with a brown leather flap-holster and a single eight round magazine. The magazine has light operational wear, scattered minor surface oxidation, intact feed lips and a strong spring. The holster has scattered light wear, scuffs, discoloration, and some more notable wear around the edges of the magazine pouch with intact stitching.

Our Assessment: This is a Fabryka Broni Radom VIS 1935 Grade II, Subvariation 2 pistol made in 1942-1944 during WWII under German occupation before manufacture was moved to Steyr in Austria in late 1944.  The design of the pistol was roughly based on John Browning’s M1911 with a slide release, de-cocker and grip safety. The VIS was originally designed for the Polish Army, but only saw a few years of service before Poland was occupied by Nazi Germany and Soviet Russia. After the war, the Russians forced the Poles to adopt the Soviet TT-33 Tokarev, even though the Tokarev was considered inferior in both ergonomics and reliability, and the VIS was no longer produced. This pistol was made during Nazi occupation for use by German forces and has matching serial markings on the slide, frame and barrel. The pistol is in Good-plus condition with about 70% of its original metal finish remaining. The bore is still strong with some light erosion. The grips have light handling wear. There were about 73,000 of this subvariation made during the war, and likely fewer surviving to this day, making the Radom a collectable piece. This should be of interest to collectors of Polish firearms and of German weaponry used during WWII. Please see our photos and good luck!