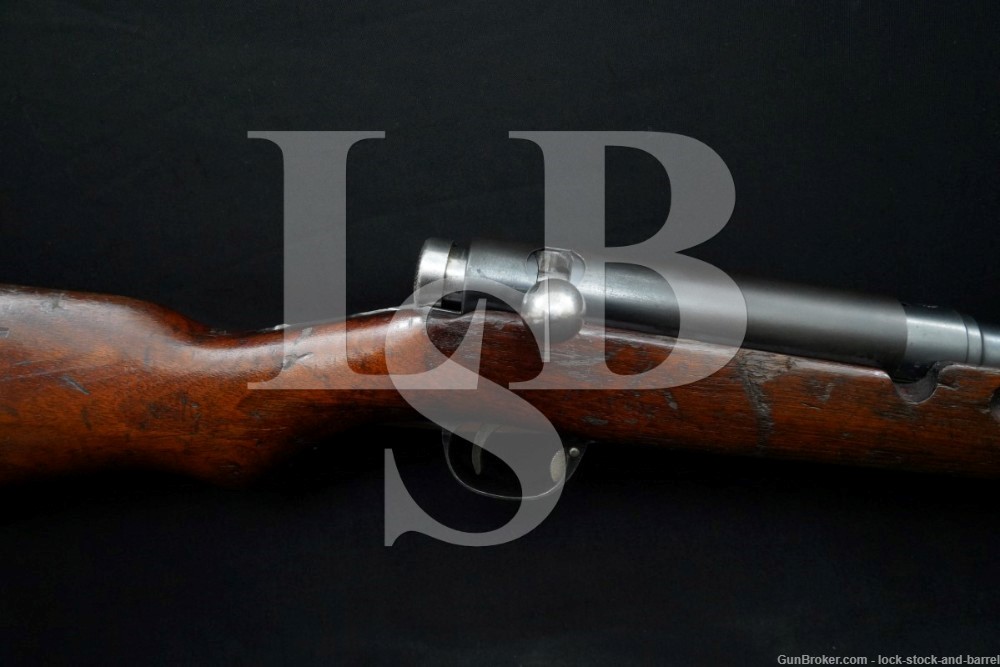 Stock Configuration & Condition: The stock is a two piece hardwood with a pistol grip, finger grooves, cutout for the folding bayonet, metal nose cap, barrel band, two sling loops, hooked bayonet quillon (not a stacking loop), and a metal buttplate. There is a lever on the right of the butt that rotates to open an oval in the buttplate. This exposes the cleaning rod storage area in the butt stock. The buttplate shows scrapes, thin scratches and some pin prick surface erosion. The wood shows several scrapes, scratches, and compression marks. Many of these marks have damaged or removed areas of surface wood. The LOP measures 13 ¼ inches from the front of the trigger to the back of the buttplate. The stock rates in about Very Good overall condition.

Bore Condition: The muzzle and grooves are light gray. The polygonal rifling is deep. There is fouling and intermittent erosion in grooves and at the muzzle. The face of the muzzle shows light surface erosion.

Overall Condition: This rifle retains about 95% of its metal finish. It shows scrapes, a few scratches, and areas of discoloration from oxidation. The most prominent marks are on the front of the barrel. The screw heads show moderate use. The markings are deep. Overall, this rifle rates in about Very Good Plus condition.

Mechanics: The action functions correctly. We have not fired this rifle. As with all previously owned firearms, a thorough cleaning may be necessary to meet your maintenance standards.
The bayonet locks into place correctly. The lever on the right of the butt is rotated up to open the oval in the buttplate and expose the cleaning rod storage area.

Box, Paperwork & Accessories: The rifle comes with a dust cover that shows scrapes, thin scratches, and discoloration from oxidation. It is in about Very Good condition. It also comes with a leather sling that is in Fine condition.

Our Assessment:Our Assessment: This Japanese Type 44 Carbine was made at the Tokyo Artillery Arsenal. It has deep markings including the Japanese “Type 44”characters on the receiver and an intact “chrysanthemum”. The rifle has been rebuilt. It was finished nicely during the rebuild, keeping the markings intact. The hook on the bayonet is not a stacking loop. It is meant to replicate a Type 30 bayonet quillon. Bayonet fencing with hooked quillons was part of Japanese military training. The rifle comes with a dust cover and a sling. This Type 44 Carbine looks good and should do well at the range. Good luck.
For more see page 208 of Joe Puleo’s book, Bolt Action Military Rifles of the World.