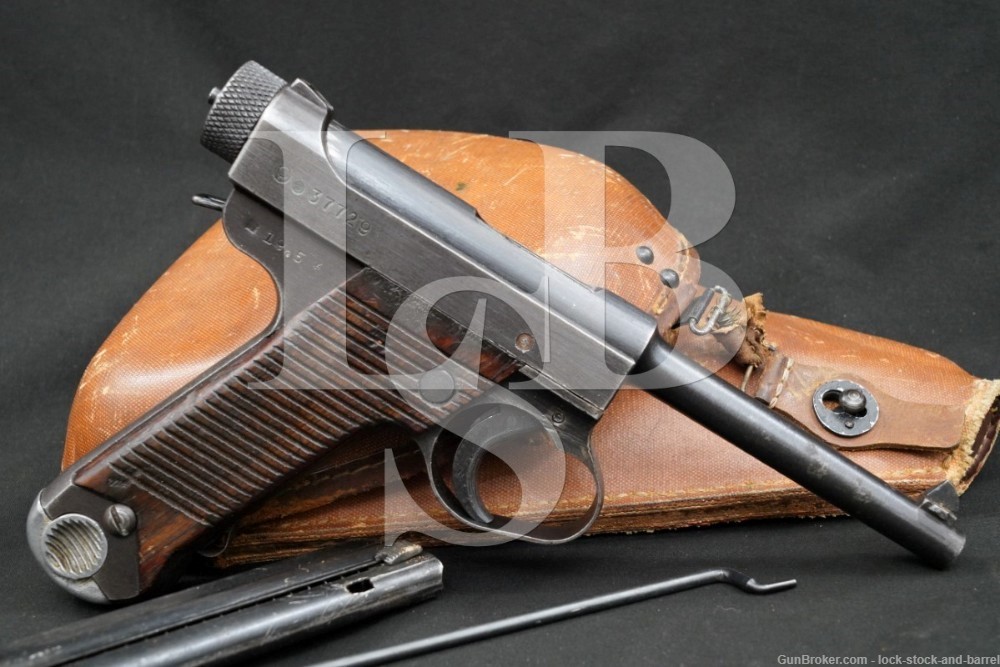 Stock Configuration & Condition: The grips are two piece wood with 24 horizontal serrations. The grips show light handling wear with scattered light nicks, most notable on the right panel behind the magazine catch and above the mounting screw. There are some light scratches in the smooth borders. There is some wear around the magazine catch on each panel. There are no cracks. The serrations are well defined. The grips rate in Very Good overall condition.

Finish Originality: Most finish is Original, the trigger guard shows treatment with cold-blue.

Bore Condition: The bore is mostly bright with sharp rifling. There is infrequent minor erosion in the bore, most at the muzzle.

Overall Condition: This handgun retains about 80% of its metal finish. The finish is thinning at all edges. The barrel has some light surface oxidation and minor erosion, most notable on the right side. The frame has handling wear in the grip areas and around the cocking knob. The bottom-rear of the trigger guard has more notable wear and tool marks, appearing to have been touched-up with cold blue. There are some scattered light nicks, scuffs and scratches. The frame’s finish has a slightly plum color when compared to the barrel assembly. The action shows light operational wear. The grip screws are tool marked with strong slots. The markings are generally clear, some are poorly struck, but legible. Overall, this handgun rates in Very Good condition.

Mechanics: The action functions correctly. The barrel assembly has no play to the frame. We did not fire this handgun. As with all used firearms, a thorough cleaning may be necessary to meet your maintenance standards.

– A rubberized canvas clam-shell holster is included. The holster has damage to the leather covering the springs of the latch assembly and has hardened significantly with age. Otherwise, it shows scattered wear, some fraying at edges, with intact stitching.

– A total of two non-serial-matching magazines are included. One magazine has standard operational wear. The other shows similar wear but also has scattered light surface erosion. Both have intact feed lips and strong springs.

– A cleaning rod is included in its storage loop inside the holster.
Our Assessment: This is a Nambu Type 14 pistol made by the Toriimatsu branch of the Nagoya arsenal in May, 1944 (2nd Series). The Type 14 was built between 1925 and 1945 for the armed forces, and almost all of the Japanese pistols and revolvers used unique cartridges. The 8mm Nambu is a bottleneck cartridge that pushes a 102 gr. bullet at a little over 900 fps. and has approximately the same power as a .380 ACP cartridge. This is a very nice find for the collector of WWII or Japanese weapons. It was produced fairly late in the war, showing the rougher finish seen on Japanese guns of the period. The Japanese were on the back foot in May, 1944. They were losing ground in New Guinea and Burma, and their Indian offensive would fail by the end of the month. In June the Battle of the Philippine Sea would drastically curtail Japan’s naval air power. This pistol has most of its original finish and the serial numbers are matching, including the grip panels, though the magazines are not matching. The pistol is in Very Good condition with about 80% of its finish remaining. The bore is mostly bright with sharp rifling and infrequent minor erosion. A rubberized canvas holster is included with the pistol, holding the gun, its additional magazine and a cleaning rod. Not that many Japanese pistols survived the war, and those that did were often in poor condition or have been refinished, so this will make a great addition to a collection. Please see our photos and good luck!