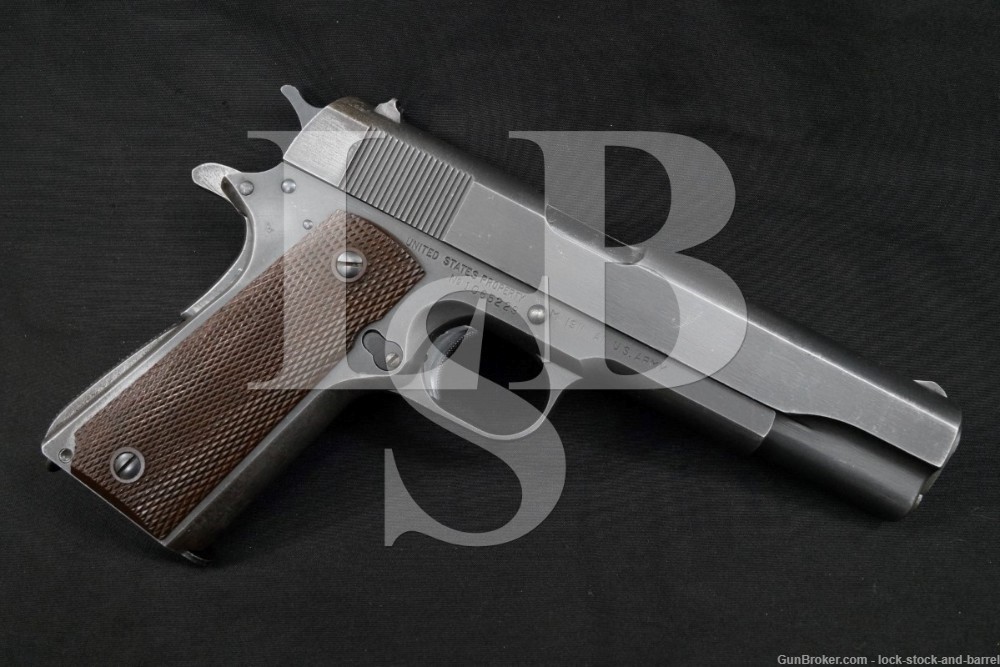 Stock Configuration & Condition: The grips are two-piece checkered brown plastic with reinforcement rings around the screws and reinforcement ribs on the inside. The grips have minor handling wear with a few light marks, most notable is a nick on the left panel below and in front of the top grip screw. The checkering is generally sharp. There are no chips or cracks. Overall, the grips are in about Fine condition.

Note: Both of the right-side grip screws are seized in their bushings, we were not able to remove the screws from the bushings. The bushings’ outside threads show light wear, but are still useable. The frame’s threads are strong.

Bore Condition: The bore is mostly bright with sharp rifling. There spots of minor pitting in the muzzle-end of the bore.

Overall Condition: This pistol retains about 70% of its metal finish. The finish is thinning at all edges. The slide has some scattered finish wear, most notable near the front sight on the top-left and on the right slide flat at the rear. The grip areas show handling wear with the frontstrap and grip safety mostly worn to white. There are some scattered light nicks, scratches and scuffs. There is a light scratch under the slide stop from disassembly/reassembly. There are some spots of minor surface oxidation, most notable in the worn area by the front sight. The action shows operational wear. The screw heads are lightly tool marked with strong slots. The markings are clear. Overall, this pistol is in Very Good condition.

Box, Paperwork & Accessories: This pistol comes with a single 7-round Ridson magazine. The magazine has minor operational wear and scattered minor surface oxidation with intact feed lips and a strong spring.

Our Assessment: The 1911 and 1911-A1 pistols served the military of the United States from 1911 to 1985, through two World Wars and the Korean and Vietnam wars. They gained a reputation as a reliable handgun with plenty of stopping power, and are held in high regard by those who have used them. As in the Great War, production demands of WWII required many manufacturers to produce military equipment for the war effort. While much of the small arms production was performed by arms manufacturers, there were also contracts that went out to other firms. As the name suggests, Union Switch & Signal Co. produced switches and signaling equipment for railroads. They received a contract to produce 200,000 1911-A1 pistols, though the contract would be shortened with only 55,000 delivered to the government. This makes the US&S 1911-A1s the second rarest of all the manufacturers, behind only Singer who developed the educational material to allow non-firearms manufacturers to swiftly tool up to produce 1911 pistols. It is believed that when the drawings were originally delivered to US&S, the “P” proof mark on the slide was not included, leading to the early production US&S pistols not having the mark at all. When this was discovered, Ordnance requested that the marking be added to the pistol, but it appears that the location was not clear, with these interim production guns having the marking notably left of center. The later production pistols had the marking in the same location as other makers. This example has the interim top-left “P” marking. The pistol is in Very Good condition with 70% of its DuLite finish remaining. The bore is mostly bright with sharp rifling and some minor pitting toward the muzzle-end. This pistol should garner a lot of interest from the collectors of WWI and WWII pistols, and 1911s in particular, but should also still make a fun shooter. Please see our photos and good luck!