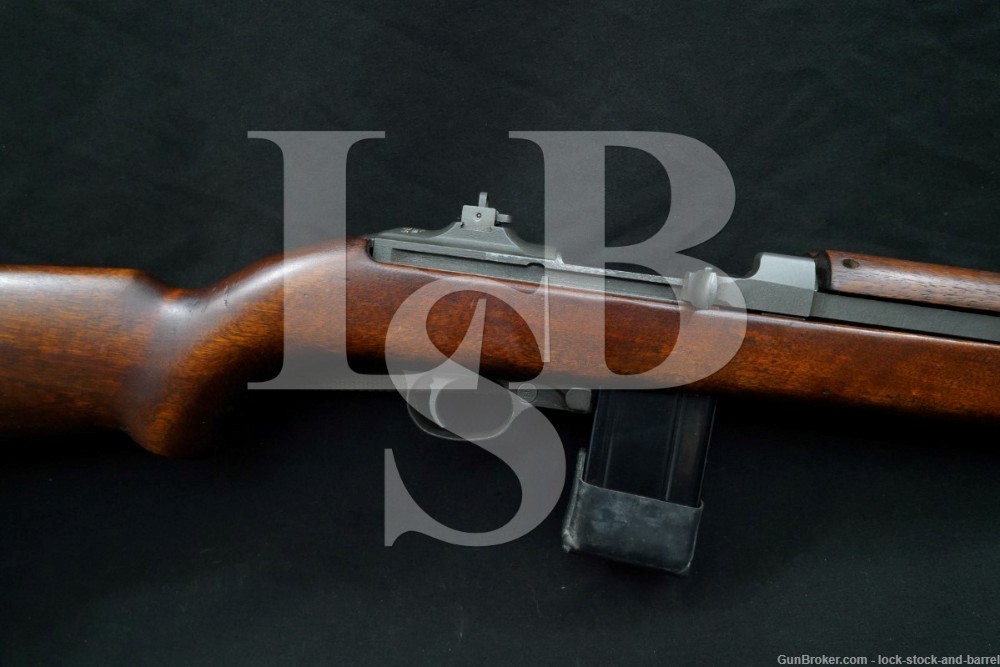 Stock Configuration & Condition: The two piece hardwood stock has a pistol grip, Type IA barrel band with sling loop, sling well, sling pass through, and a metal buttplate. There is a hairline surface crack to the rear of the trigger guard. It does not flex when pressure is applied. The wood shows several scrapes, scratches, and compression marks. Many have damaged or removed small portions of the surface wood. These marks have been oiled over. The LOP measures 13 ? inches from the front of the trigger to the back of the buttplate. The stock rates in about Very Good overall condition.

Bore Condition: The muzzle and grooves are grey. The rifling is deep. There is erosion in the grooves and at the muzzle. The bore shows an M.E. of 1.9.

Overall Condition: This rifle retains about 97% of its metal finish as refinished. The receiver shows areas of discoloration under the wood. The front sight & trigger guard show scrapes. The metal shows other scuffs & handling marks. The right side of the receiver shows light thinning from cycling the action. The markings are deep. Overall, this rifle rates in about Very Good Plus condition as refinished.

Our Assessment: This National Postal Meter M1 Carbine was built back in 1944. The metal has been refinished and the wood has been oiled so it looks great for a 77 year old service rifle. This M1 NPM Carbine uses all NPM parts and has nice markings metal & wood. This M1 Carbine will add nicely to your collection.
Here is some interesting information on NPM from www.uscarbinecal30.com/manufacturers.html : “A week after America’s entry into WWII, National Postal Meter and the Todd Corporation partnered to start the Rochester Defense Corporation. It was this company that negotiated for the contract to produce M1 Carbines. Shortly after the approval of their 2nd contract, but before production started, Rochester Defense Corporation was dissolved and its assets merged into National Postal Meter. At the time of their first contract, the company had no tools, no employees, and no location for building carbines. National Postal Meter’s test fire range was built by raising the floor of the carbine manufacturing plant three feet above the building’s concrete floor and literally shooting under the feet of the production line…Performance testing gave them the highest rating in adverse conditions. (NPM) made no barrels…National Postal Meter Company changed the name of their company to Commercial Controls Corporation on April 26, 1944. The same month they ceased carbine production. The 239 Commercial Controls M1 Carbines were assembled from leftover parts and provided to U.S. Army Ordnance in August 1945.”