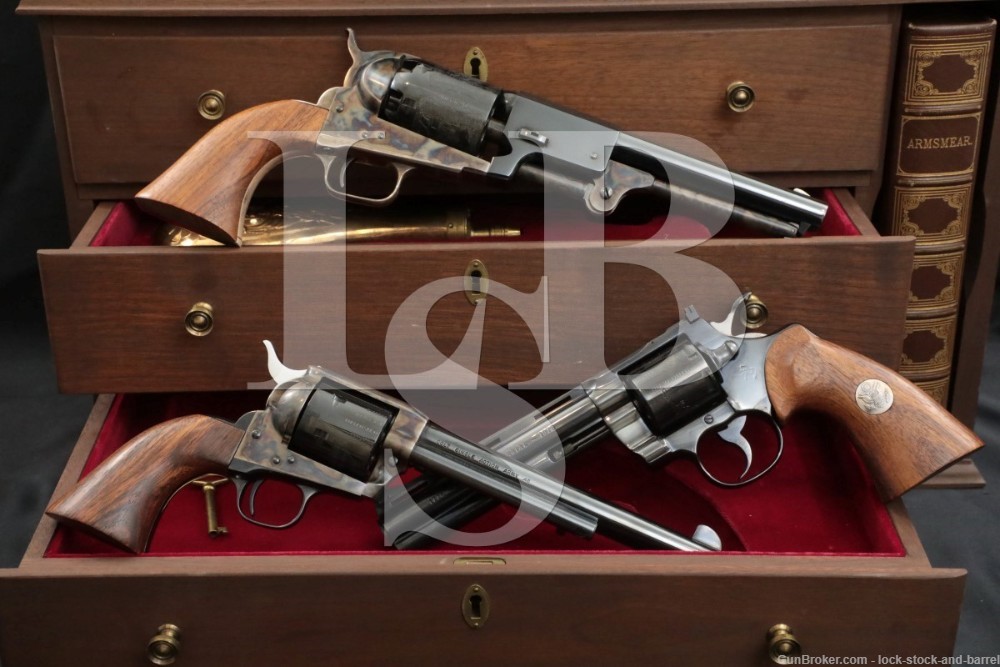 Single Action Army: This revolver retains about 97% of its metal finish. There are a few light handling marks on the barrel. There are a couple light marks through the finish on the cylinder. There are some scratches on the grip frame, mostly on the backstrap. The frame has some light wear. The screw heads are sharp. The markings are clear. Overall, this revolver is in Fine condition.

Python: This revolver retains about 97% of its metal finish. There is a light scratch on the right side of the frame behind the cylinder. Otherwise, there are only light handling marks. The screw heads are sharp. The markings are clear but the rampant colt is shallow and rounded. Overall, this revolver is in about Fine Plus condition.

Box, Paperwork & Accessories: The Original Factory Wood Three-Drawer case is included. Each drawer is velvet lined and has a lock, the key is included. The Dragoon’s drawer includes a powder flask, bullet mold, cap tin and nipple wrench. Also in the case is a leather-bound book, marked “ARMSMEAR” on the spine. This book is “The Home, the Arm, and the Armory of Samuel Colt. A Memorial.” The case has some scattered minor storage wear from storage. One of the top rear corners has an impact mark. The case is Very Good-Fine condition.