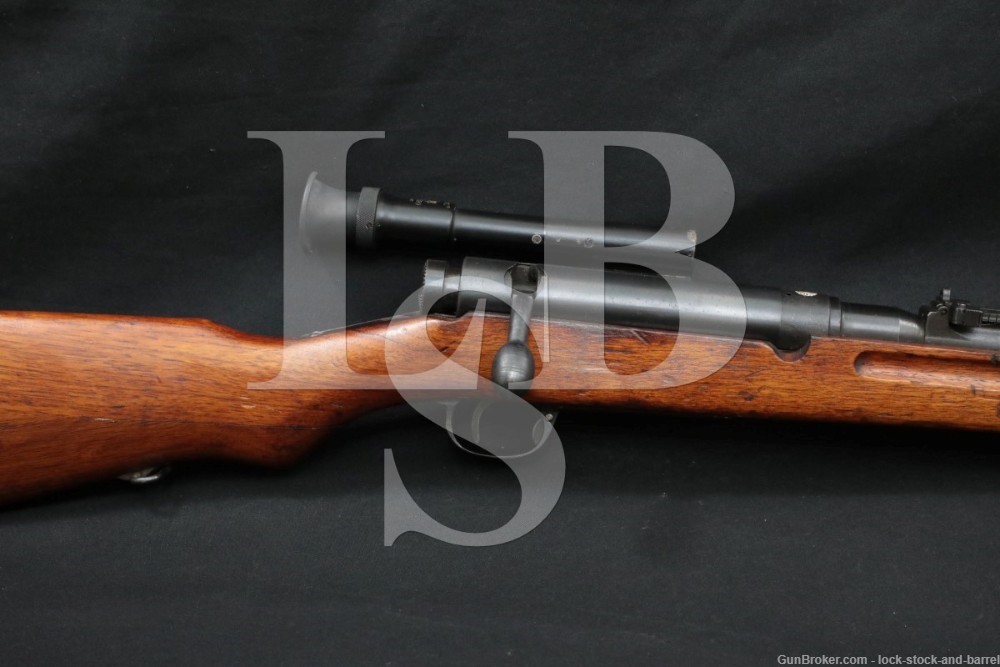 Markings: The left side of the receiver is marked with the serial number, a Kana character denoting the 1st series next to another small marking, and the Nagoya Arsenal marking. The top of the receiver is marked with a Japanese Imperial Chrysanthemum and Characters denoting “Type 97”. The mum has two faint lines through it yet it is mainly intact. The front face of the safety, the firing pin, the bottom of the bolt handle, and the bottom of the bayonet lug are marked “438”. The rear face of the dust cover is marked “716”. The rear face of the bolt has decorative metal work. The rear of the bolt handle has small markings. The top of the scope is marked “2.5 X 10”, the Nikko logo, “No 8599”, and “JES” next to two small Japanese markings.

Sights / Optics: The front sight is an inverted “V” dovetailed into a banded rectangular base with protective ears. The rear sight is a ladder sight that is screwed to the barrel. The rear of the ladder has a fixed peep sight for use when the ladder is folded down. When the ladder is folded up, there is an aperture in the center of the slider for use. The sides of the ladder are marked from “4” to “22”. The slider has spring-loaded latches for raising and lowering the slider and locking it into position. The ladder is missing the anti-aircraft wings. There is no visible import mark. Also included is an original Type 97 sniper scope with 2.5x magnification. The lenses retain a high level of visibility.

Stock Configuration & Condition: The stock is smooth wood with finger grooves, metal nosecap with a hole for the cleaning rod, pistol grip, straight comb, steel buttplate, and two sling loops. The buttstock is made from two pieces of wood, with the bottom piece starting near the bottom of the pistol grip. The lower tang wraps around the front of the bottom piece to better secure the piece. The wood appears to have been refinished at some point. There is a crack extending from the bottom metal through the left side of the wrist. There are numerous scattered compressions, impact marks, scratches, scuffs, and scattered discoloration. Some of these defects have removed light portions of surface wood. The LOP measures 12 7/8” from the front of the trigger to the back of the buttplate. The buttplate shows scattered nicks and impacts and thinning along the edges. The stocks are in about Fair-Good condition as refinished and would rate higher if not for the crack.

Bore Condition: The lands are bright and the grooves have some light erosion. The rifling is well defined.

Overall Condition: This rifle retains about 85% of its metal finish. There is light thinning around the muzzle. There are some little nicks and dings throughout the metal. There is light oxidation on the dust cover. There is thinning on the bolt from operational wear. The screw heads are disfigured yet serviceable. The markings are clear. Overall, this rifle rates in about Very Good condition.

Our Assessment: As stated by Melvin Ewing from Sniper Central, “In the early phases of World War 2 when the American’s were first encountering the Japanese in the Pacific, nothing instilled more fear into the American GI than the Japanese sniper. During these early phases of the war, the snipers from Japan were very effective, gaining a reputation of exceptional fieldcraft and concealment capability. As tactics developed to counter the sniper threat and as the Japanese losses to their experienced sniper corps mounted, their effectiveness diminished, but their reputation had already been solidified. During the war, one of the rifles the Japanese snipers utilized was a sniper variant of the type 38 rifle called the Type 97. The Type 97 was based off the Meiji 38th Year (Type 38) infantry rifle and chambered in the 6.5x50mm Arisaka Cartridge. The  Type 38 included many design elements from the legendary Mauser action and was a considerable improvement on their own Arisaka 1897 design. Two of the main differences in the Type 38 infantry rifle and the Type 97 Sniper rifle was that the later model used a 2.5x scope, a turned down bolt handle, and the early models came with a bipod. As was common on sniper rifles during this period, the scope was mounted offset to the left of the receiver to allow the rifle to be loaded using stripper clips, also known as a charger, and it also allowed the sniper to still be able to utilize the iron sights. The Type 97 was a large rifle with a very long 31.4? (798mm) barrel and an overall length of 50? (1.27m) and it weighed in at 8.6 lbs (3.9 kg).  The internal 5-round box magazine could be loaded either by a 5-round stripper clip or individually.” This rifle is in about Very Good overall condition. This item would be an exceptional win for any WWII collector. Please see our photos and good luck!