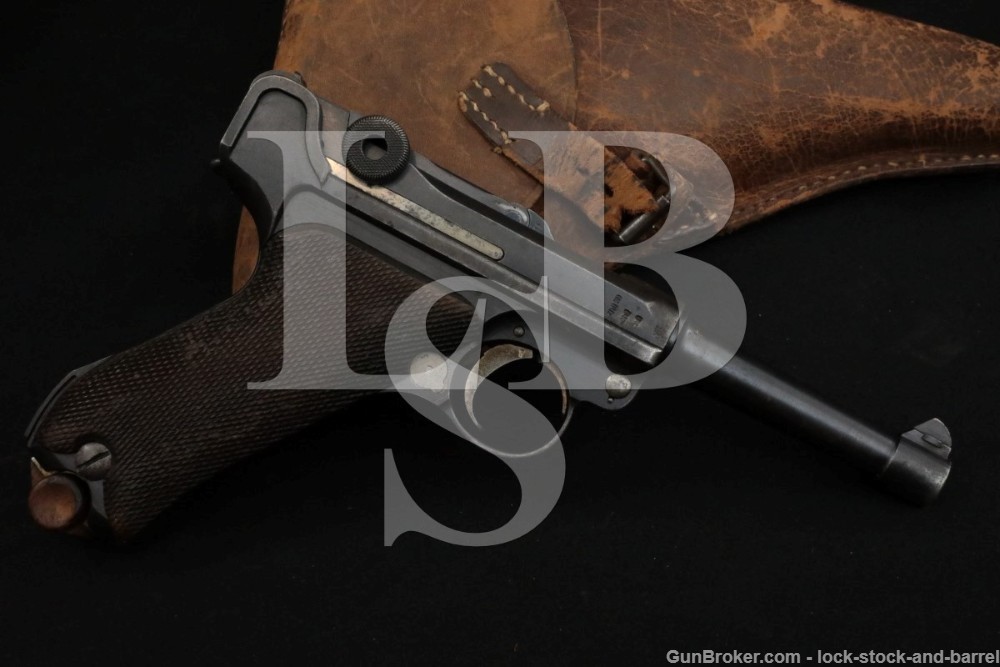 Stock Configuration & Condition: The grips are two-piece checkered walnut. The grips have light handling wear with a few scattered damaged checkers on the left panel and a patch of compressed checkers on the right panel behind the magazine release. There is scattered stubborn residue in the checkering which is generally well defined. There are no chips or cracks. Overall, the grips are in Very Good condition.

Finish Originality: The finish appears Original, there is a ring of machining at the rear of the barrel before it steps-up to meet the frame. This ring is finished and has markings, it is unclear if this is a factory machining error, an indicator of refurbishment or if it had markings removed and then was force-matched.

Bore Condition: The bore is semi-bright with sharp rifling. There is some light erosion in the bore, mostly in the grooves.

Overall Condition: This pistol retains about 87% of its metal finish. The finish is thinning at all edges. The strawed parts show light wear. The barrel extension has some light wear, most toward the top-front. Most of the balance is in scattered minor surface oxidation. There is some other scattered light wear and minor marks. The action shows operational wear. The screw heads are tool marked with strong slots. The markings are clear. Overall, this pistol is in Very Good condition.

Box, Paperwork & Accessories: This pistol comes with a brown leather flap-holster and a single 8-round magazine. The inside of the holster’s flap is marked “J.F.T.WOLLER / ESSEN / 1916” and with an ink stamp we can’t make out. The holster shows moderate-heavy wear with the flap’s tab torn through, broken stitching and some tearing at the bottom of the holster and some fraying at edges. The magazine’s wooden floorplate is marked “6635 / a / +”. The magazine has scattered wear and minor oxidation, a dent in the spine toward the bottom, and stubborn dried grease with intact feed lips and a strong spring.

Our Assessment: The Luger (Pistole Parabellum or P-08) is perhaps the most aesthetically and ergonomically pleasing of all autoloading centerfire pistols. It is also one of the strongest, most accurate and most recognizable service pistols ever made. Georg Luger developed his famous pistol in 1898-1899 (starting with the Borchardt/Luger transitional pistol). The Luger is, essentially, a much improved Borchardt type pistol, which was itself based on the toggle action concept used by Sir Hiram Maxim in the world’s first practical machine gun. The Luger was so well liked and reliable that it was still being made and issued to German troops well after the P38 was adopted by the army. This Erfurt Arsenal made Luger was made in 1916 and all of the serialized parts of the pistol are matching, though the magazine is a replacement. The proof and inspection marks are correct for a 1916 Erfurt military issue pistol. This pistol is in Very Good condition with about 87% of its original finish remaining. The rear of the barrel does have a ring of odd machining, maybe Fritz fell asleep at the lathe. The bore is semi bright with sharp rifling and some light erosion. The receiver is tight to the frame and the pistol is in great mechanical condition for being over 100 years old. This is a very nice find for Luger collectors and those with an interest in German military arms as used in WWI and WWII. Please see our photos and good luck!