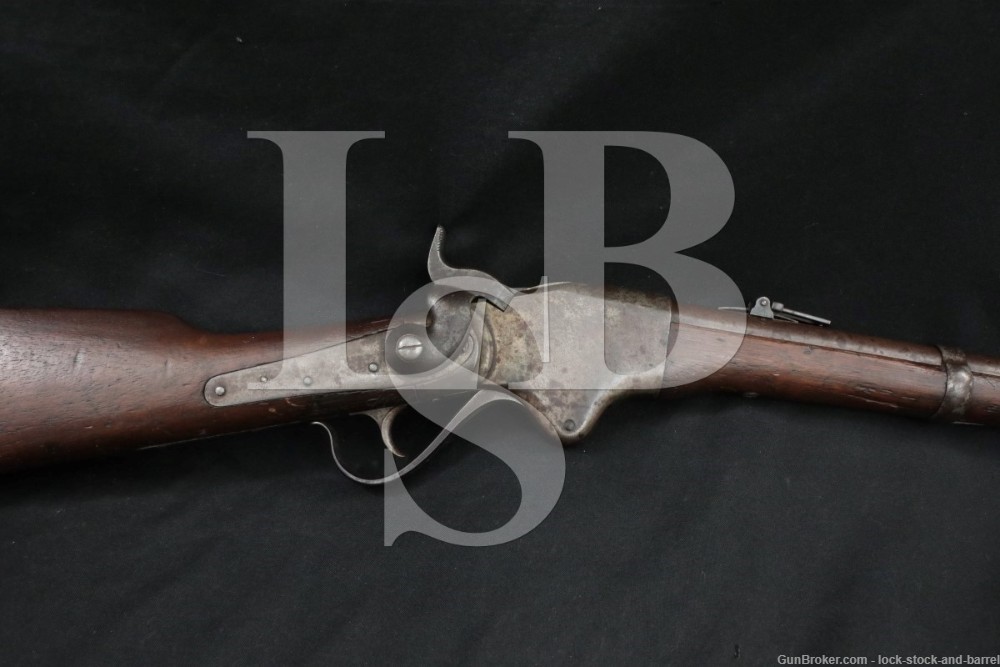 Stock Configuration & Condition: The stocks are two piece smooth walnut with a banded forend, straight grip, straight comb and steel carbine-style buttplate. The sling bar has been removed. The buttstock houses the magazine tube, removed by rotating a tab at the rear and pulling out through the buttplate. The stocks have scattered nicks, dings, scuffs and scratches. There is a long crack extending from the rear of the receiver back along the left side of the buttstock. There is another smaller crack to the right of that one. There is a crack in the left side of the forearm and a few small splits and the front to the right. There is some material loss on the left front edge. The LOP measures 12 7/8? from the front of the trigger to the back of the buttplate. The plate has gone to a moderate-dark patina with scattered nicks, wear and some erosion. Overall, the stocks are in about Good condition as Antique.

Bore Condition: The bore is grey with well defined rifling. There is scattered moderate erosion and pitting in the bore.

Overall Condition: This rifle retains about 10% of its metal finish. There is some blue remaining on the bottom of the barrel, covered by the forend. The sling bar plate has faint case coloring remaining. The exposed surfaces have gone to a light-moderate patina. There are some scattered light nicks, scuffs, scratches, and light surface erosion. The action shows operational wear. There is a screw missing from the bottom tang at the front. The remaining screw heads range from tool-marked to disfigured with serviceable slots. The markings range from clear to worn and incomplete. Overall, this rifle is in about Good-Plus condition as Antique.

Our Assessment: The inventor of the Spencer Carbine was Christopher Miner Spencer, one of the leading figures of the machine tool industry. The Spencer carbine was different from any other firearm of its time. It was accurate; fired rapidly; had a long effective range; and held seven metallic cartridges that weren’t affected by moisture. It could be fired more rapidly than a Colt style revolver and reloaded in one-tenth the time. By the end of the Civil War, more than 144,000 Spencer rifles and carbines had been manufactured; over two-thirds of which were purchased by the U.S. government. To keep up with demand, Spencer subcontracted some production to the Burnside Rifle Co. of Providence, Rhode Island. Spencer rifles and carbines met with high praise from those who were equipped with them, and with respect from those who faced them in battle. In its first combat test, Spencer-armed Union troops under the command of Colonel John Wilder earned the nickname “Lightning Brigade” when they defeated a numerically superior Confederate force at the Battle of Hoover’s Gap, Tennessee on June 24, 1863. This is a Spencer carbine that is still in its original configuration, unlike many which were later modified and re-chambered. The carbine is in about Good-Plus condition with about 10% of its finish remaining. The bore is fair, but the mechanics are still strong and the barrel and receiver have matching serial numbers. This is a nice find for collectors of Civil War carbines and other early American cartridge rifles. Please see our photos and good luck!