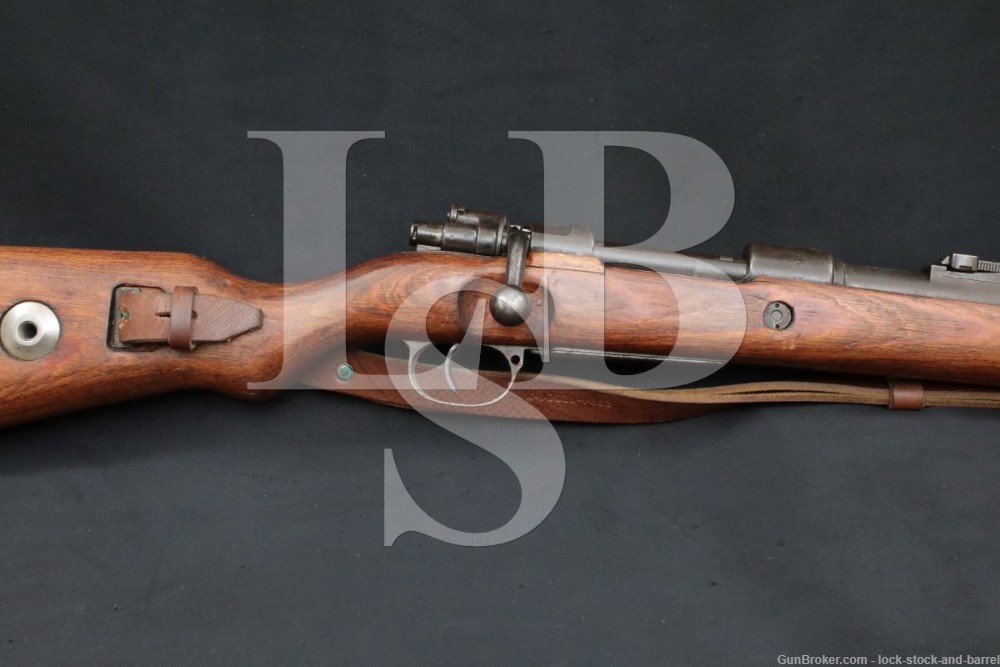 Sights / Optics: The front sight is an inverted “V” post set atop a ramped base and under a removable protective hood. The rear sight is a “V” notched blade attached to a sliding escalator assembly marked from “1-20”.

Stock Configuration & Condition: The laminate stock has a pistol grip, nose cap, hole for the missing cleaning rod, barrel band with sling bar, scallop for the bolt handle, through bolt, slingwell, sling pass through, domed washer, and a metal buttplate. The buttplate, nosecap & barrel band show scratches and discoloration from oxidation. The buttplate also shows surface erosion. The left side of the stock shows an edge repair at the right rear of the receiver. The rear of the handguard shows a hairline crack that flexes when pressure is applied. The wood shows several scrapes & scratches which have been oiled over. The LOP measures 13 ? inches from the front of the trigger to the back of the buttplate. The stock rates in about Very Good overall condition.

Bore Condition: The bore is dark and the rifling is deep. There is erosion throughout the bore.

Overall Condition: This rifle has lost its metal finish. The metal shows scrapes, scratches, discoloration from oxidation, and areas of light surface erosion. The screw heads show. Some of the markings are faded. Overall, this rifle rates in about Good condition.

Mechanics: The action function correctly. We have not fired this rifle. As with all previously owned firearms, a thorough cleaning may be necessary to meet your maintenance standards.

Box, Paperwork & Accessories: The rifle comes with an Israeli K98 sling. It shows light scrapes & light discoloration on the leather as well as scrapes & oxidation on the metal. It is in about Very Good Plus condition.

Our Assessment: This German K98 was made at the Mauser Oberndorf factory in Germany back in 1943. It has since been rebuilt. This WWII Nazi K98 has seen some use but many of its markings are well defined. The markings include Nazi “eagle / swastika” stamps on the barrel & receiver. This K98 will add to your WWII collection.