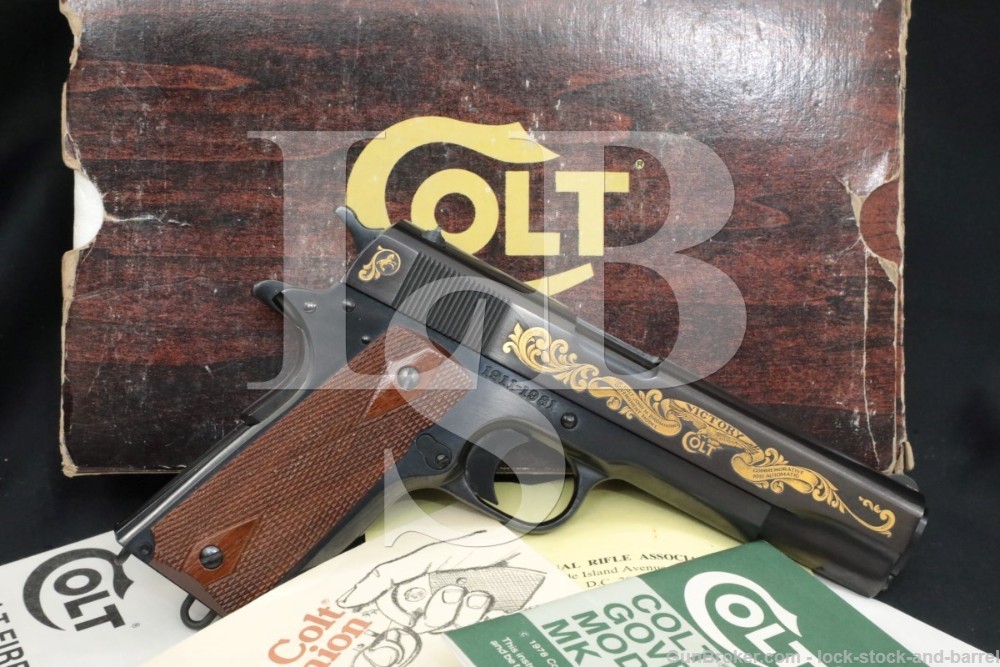 Markings: The left side of the slide has gold scroll surrounding a doughboy scene under “since 1911” banner, gold panel marked “PATENTED / APR. 20, 1897 / SEPT. 9, 1902 / DEC. 19, 1905 / FEB. 14, 1911” with a banner across it marked “Colt’s Pt. F.A. Mfg. Co. Hartford, Ct. U.S.A.”, banners marked “C.L.F. Robinson” and “J.M. Browning” above and below a scene of the two men and behind the slide serrations with a rampant colt logo. The right of the slide has the same rampant colt logo behind the slide with gold scroll surrounding banners marked “THE COLT JOHN M. BROWNING / GOVERNMENT MODEL”, “VICTORY” over an American eagle and Colt logo, and “COMMEMORATIVE 1911 AUTOMATIC”. Outside and above the gold scroll toward the front is marked “AUTOMATIC COLT CALIBRE .45 / RIMLESS-SMOKELESS”. The right of the frame is marked “1911-1981”. The left of the frame is marked “CJMBC1216”. The left of the trigger guard is marked “B”.

Overall Condition: This pistol retains about 99% of its metal finish. The face of the muzzle is a little bit rough, but this appears to be a factory defect. There is minor operational wear. Otherwise, there are only light handling marks. The screw heads are sharp. The markings are clear. Overall, this gun rates in about Excellent condition.

Box, Paperwork & Accessories: This pistol comes in a faux-wood cardboard Colt box with an assortment of factory paperwork including manual and a single 7-round magazine. The box has moderate wear with rips and tears. The label-end of the box has torn off but is included with serial-matching label. The magazine has a lanyard loop floorplate, showing light operational wear, intact feed lisp and a strong spring.

Our Assessment: Made in 1981 to commemorate America’s greatest firearms inventor, this is a Colt Government Model 1911, one of Browning’s most iconic designs, which has been decorated in gold and has scenes commemorating Browning and the influence he has had on America. It was produced after 90 years of production and more than 3,000,000 Government Models produced with the 1911 serving as the standard issue sidearm of US Armed Forces through two World Wars and other conflicts. The pistol is a throwback to the original, with flat mainspring housing and no trigger relief cuts on the frame as well as a lanyard-loop magazine. For fans of Browning, Colt or the 1911, this is a pistol well worth adding to your collection. Please see our photos and good luck!