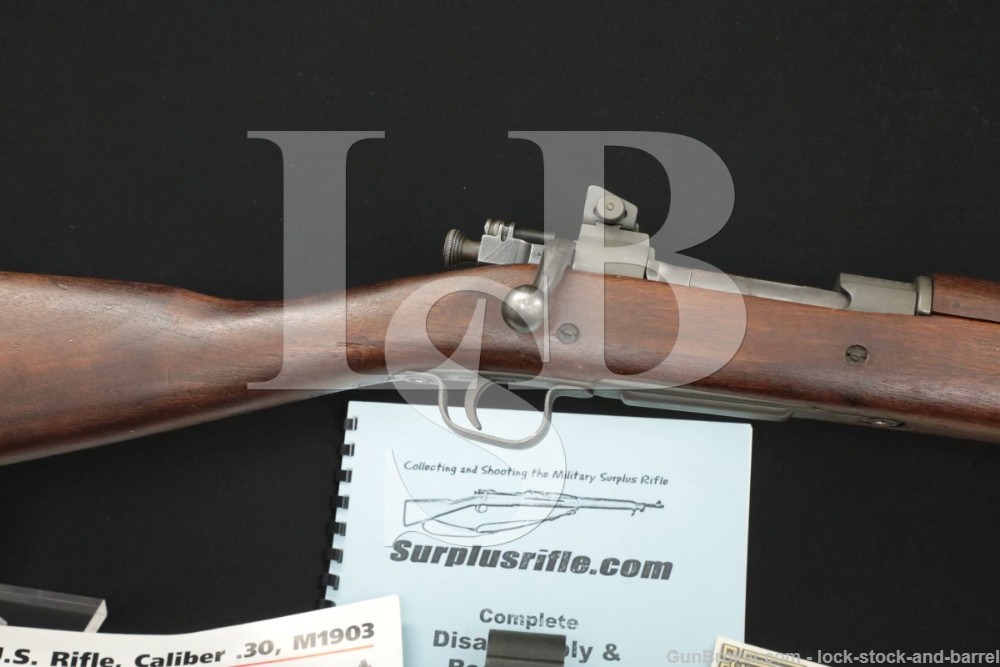 Sights / Optics: The front sight is a pinned blade set in a raised base. The rear sight is a fully adjustable aperture sight marked from “2-8” on the top and “0” with hash marks on the rear. The numbers and hash marks have a yellow color fill.

Stock Configuration & Condition: The hardwood stock has a straight grip, metal nose cap, stacking loop, barrel band, 2 sling loops, 2 reinforcing bolts, and a metal buttplate with a hinged door for storage. The bayonet lug has broken off the nosecap but a replacement nosecap is included with the rifle. There are some infrequently scattered compressions, dings through the finish, and a few light scrapes. There are scattered draglines and handling marks. The LOP measures 12 ¾ inches from the front of the trigger to the back of the buttplate. The plate has some scattered light marks, finish loss on the edges, and a few little spots of light oxidation. The stock rates in about Very Good-Fine overall condition as refurbished.

Bore Condition: The 2 grooved bore is bright and the rifling is sharp. There is no erosion. The bore has an M.E. of about 0.5.

Overall Condition: This rifle retains about 95% of its metal finish. The bayonet lug has broken off of the nosecap, a replacement is included. The receiver has some little scuffs and rubs. The barrel and bottom metal have some little scuffs that have thinned the finish and there are a few little nicks. The bolt handle has some thinning and some spots of minor discoloration from previous oxidation. The extractor and rear bolt lug have a few spots of oxidation. There is some thinning on the bolt at the rear. There is standard operational wear. The screw heads show light use. The markings are clear. Overall, this rifle rates in about Fine condition.

Box, Paperwork & Accessories: Included is a replacement nosecap and a disassembly & reassembly guide.

Our Assessment: The M1903 Springfield rifle is a clip-loaded 5 round magazine-fed bolt-action service rifle. It was adopted as the standard United States military bolt-action rifle in 1903 and served our country through two world wars even after it was “replaced” by the M1 Garand in 1937. It continued to serve as a sniper rifle through the Korean war and into the early days of the Vietnam war. It remains popular as a civilian firearm, historical collector’s piece and also sees use as a military drill rifle. This one was made by Remington and has nice markings and some light wear to the metal. It still looks great, has nice markings, and a great bore just waiting to be shot. This will be a nice addition to your C&R or military surplus collection. Please see our photos and good luck!