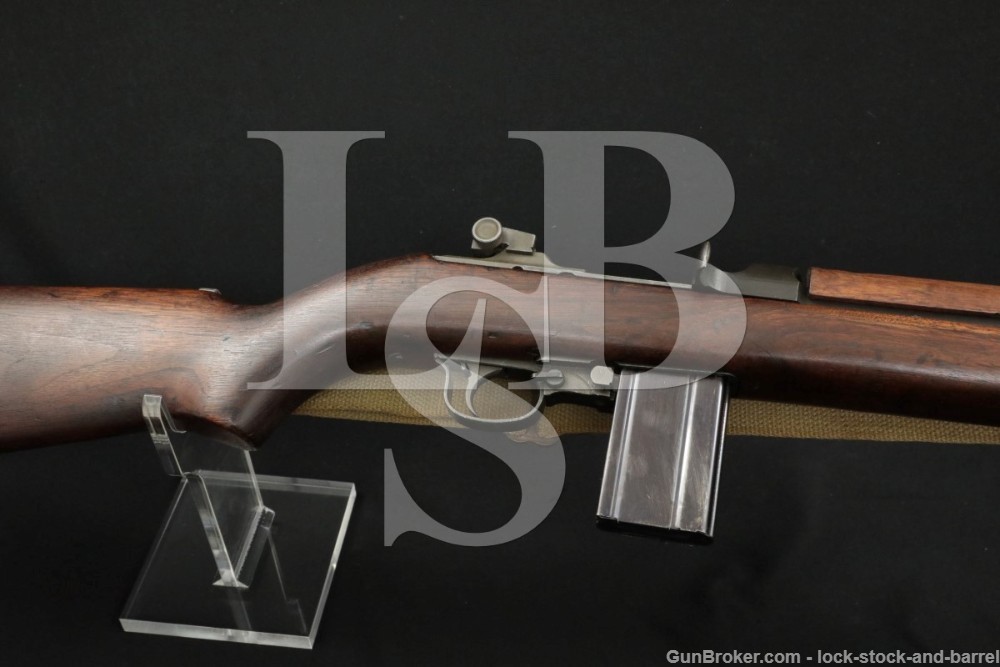 Sights / Optics: The front sight is a post set between two protective wings. The rear sight is a fully adjustable Type II aperture.

Stock Configuration & Condition: The two piece hardwood stock has a pistol grip, Type III barrel band with sling loop & bayonet lug, sling well, sling pass through and a metal buttplate. The buttplate shows small scratches and discoloration. The right side of the stock shows an edge repair above the op rod. The wood shows several scrapes, scratches and compression marks. Some of these marks have damaged or removed small portions of the surface wood. These marks have been oiled over. The LOP measures 13 ¼ inches from the front of the trigger to the back of the buttplate. The stock rates in about Very Good overall condition as refurbished.

Bore Condition: The bore is bright; semi bright at the muzzle. The rifling is sharp. There is no erosion. The bore shows an M.E. of 1.3.

Box, Paperwork & Accessories: The rifle comes with a canvas sling and a 15 round magazine. The canvas sling shows discoloration & soiling on the canvas as well as surface erosion on the metal. It is in about Good to Very Good condition. The magazine shows scrapes & thin scratches. It is in about Very Good Plus condition. The 15 round magazine is not available to residents of California or any other state with magazine capacity restrictions.

Our Assessment: This Standard Products M1 Carbine was originally built back in 1943. It has since been rebuilt using a mix of USGI parts and a Herlo Engineering Corp. barrel. The rifle was refinished during the rebuild so it looks good and has a strong bright bore.
Here is some barrel info from www.uscarbinecal30.com/barrels.html:
“Herlo Engineering Corp. manufactured .30 Caliber Carbine barrels under government contract from 1970-1974… All of the Herlo .30 Caliber Carbine barrels were rejected by the government due to numerous quality control problems…Not all of the barrels had these problems but the percentage was sufficient to warrant the entire contract being rejected. A Los Angeles area surplus dealer purchased these barrels from Herlo about 1975. Many, if not most, of the barrels were sold to the government of South Korea with many imported back into the United States in the mid 1990’s by Armscorp in Baltimore and Red Cloud in Virginia. Others have surfaced on carbines returned to the U.S. Army by other nations. Thousands of these barrels have been sold retail. Over the years several companies and/or owners have attempted to correct the ones out of spec.”