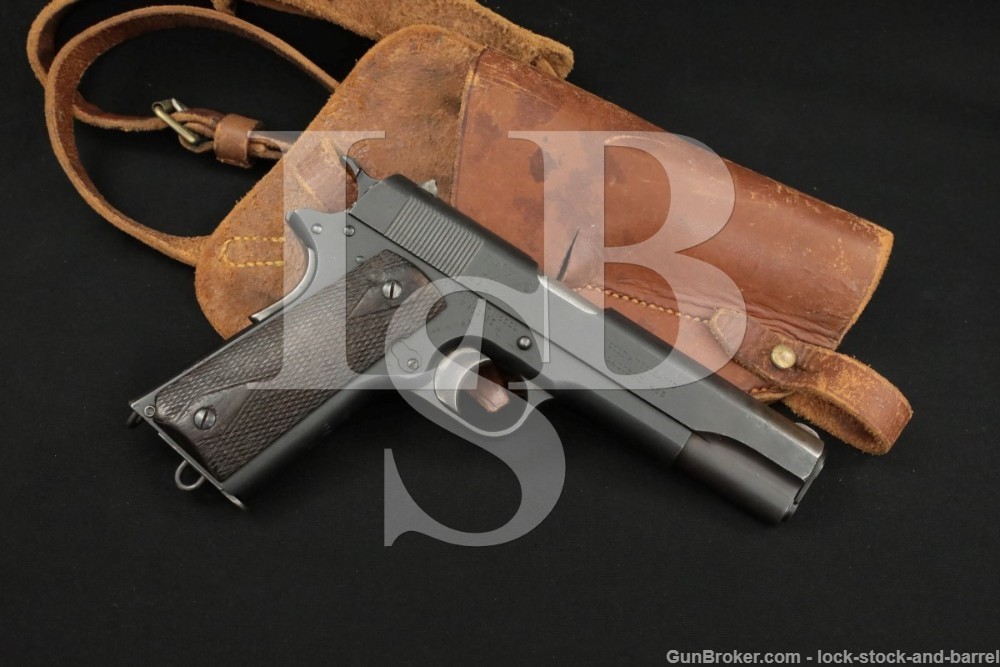 Year of Manufacture: Ca. 1919, shipping of these models was not sequential and the first serial range which includes this serial number shipped to England in April 1919 (“The Government Models”, William Goddard)

Stock Configuration & Condition: The grips are two-piece checkered walnut with smooth diamonds around the grip screw escutcheons. The grips have light-moderate handling wear. There are some scattered nicks, scratches and tool marks around the grip screws. There are areas of compressed checkering, but the checkering is generally well defined. There are no chips or cracks. Overall, the grips are in about Good-Very Good condition.

Overall Condition: This pistol retains about 80% of its current metal finish. The finish is thinning at most edges. The most notable finish loss is on the top-front of the slide. There is handling wear on the grip safety. There are scattered nicks, scuffs and scratches including some under the finish. The actions shows operational wear. The screw heads range from sharp to tool marked with strong slots. The markings are clear. Overall, this pistol is in about Very Good condition as refinished.

Box, Paperwork & Accessories: This pistol comes with a single 7-round magazine with a lanyard ring on the floorplate and the top portion left in the white. The magazine has some minor surface oxidation, operational wear, intact feed lips and a strong spring, in Very Good condition. Also included is a brown leather shoulder holster, marked “H. TILL / SADDLER / SALISBURY” on the back. The holster has Sam Brown studs for both the pistol and belt straps. The harness is adjustable with a roller-buckle. This design and marking are consistent with SAS holsters, but this is the only example we have seen, so we cannot be sure of authenticity. Please see the photos of the holster.

Our Assessment: The 1911 and 1911-A1 pistols served the military of the United States from 1911 to 1985, through two World Wars and the Korean and Vietnam wars. They gained a reputation as a reliable handgun with plenty of stopping power, and are held in high regard by those who have used them. The quality of the pistol was not lost on those from foreign countries, and there have been examples used all around the world. Demand was high enough that Colt chambered their Government model for the British self-loading service cartridge, .455 Webley. There were some government contracts and also many were purchased by British officers who frequently purchased their own service sidearms. This example has an “E” contract marking on the top of the frame, indicating that it came from a British government purchase during the Great War, ca. 1919. While there were many different users of this model, they are most associated with the Royal Flying Corps and nearly all would end up in the service of the re-named Royal Air Force. This example of a British contract Government Model has a couple of interesting features. Its frame has the “heart-shape” cuts under the grips, an approved method of reducing machine time by not finishing out the standard oval shape. It has unit markings, which we have not seen on other British contract 1911 pistols. We could not find a definitive source, but the slide markings appear to tie it to RAF Uxbridge and the frame unit marking may be from No. 1 Squadron. It also has no American import markings, likely being snapped up shortly after being sold out of British service or perhaps even traded for during WWII. If you have a good source of .455 Webley Self-Loading ammo, it could be a fun shooter. That said, its history will make a great addition to a number of collections, whether you specialize in 1911s, British military firearms, or WWI small arms. Please see our photos and good luck!