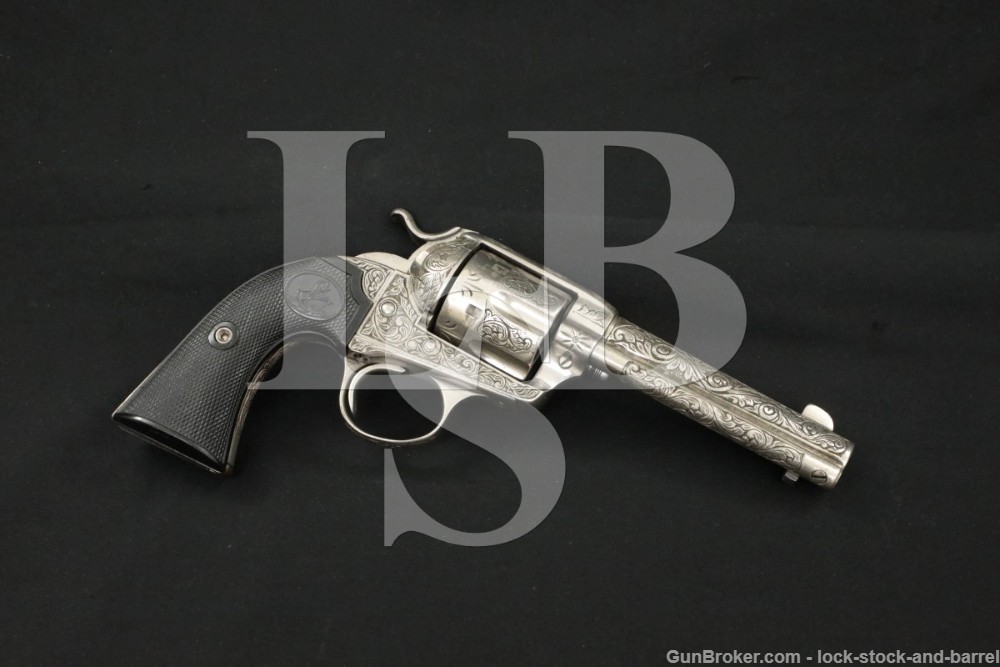 Stock Configuration & Condition: The grips are two piece checkered hard rubber with rampant colts in ovals at their tops. The grip screw escutcheon in the right panel has worn free, turning when the screw head is turned and not allowing removal of the screw. The grips have light play to the frame and are alternately proud and shy to the frame. The left grip has a crack at the top-front corner across the rampant colt oval. There are some scattered light nicks, scuffs and scratches. The checkering is generally well defined. Overall, the grips are in about Fair-Good condition as not original to the gun.

Bore Condition: The bore is dark. The rifling is well defined. There is light-moderate erosion throughout the bore.

Overall Condition: This handgun retains about 90% of its current metal finish. There is some handling wear in the grip areas. There are scattered spots where the nickel finish is a little cloudy. There are several scattered minor nicks, scuffs and scratches, showing discoloration from oxidation where through the finish. The action shows operational wear including a turn-line on the cylinder. The screw heads range from sharp to tool marked with strong slots. The markings range from clear to worn and incomplete. Overall, this revolver is in about Very Good condition as refinished.

Mechanics: The action functions correctly. The cylinder has a removable bushing, but the bushing is seized in place. The cylinder locks up with light play side-to-side and minor end-shake. The trigger is crisp. We did not fire this handgun. As with all used firearms, a thorough cleaning may be necessary to meet your maintenance standards.

Our Assessment: The Colt Bisley was introduced in 1894 as a target pistol. The name Bisley came from the famous firing range in Bisley, England. The Colt Bisley can be distinguished by the longer grip, the wider hammer spur, and the wider trigger. Bisleys were serial-numbered in the range of 156300–331916, in the same sequence as the Single Action Army. This example is a Bisley Model Colt Frontier Six Shooter, chambered for the .44-40 Winchester cartridge. The revolver has had extensive and deep relief engraving with a new nickel finish applied after the engraving, resulting in a six-shooter with a beautiful Old West appearance. This will make a nice addition to a Colt or American West collection. Please see our photos and good luck!