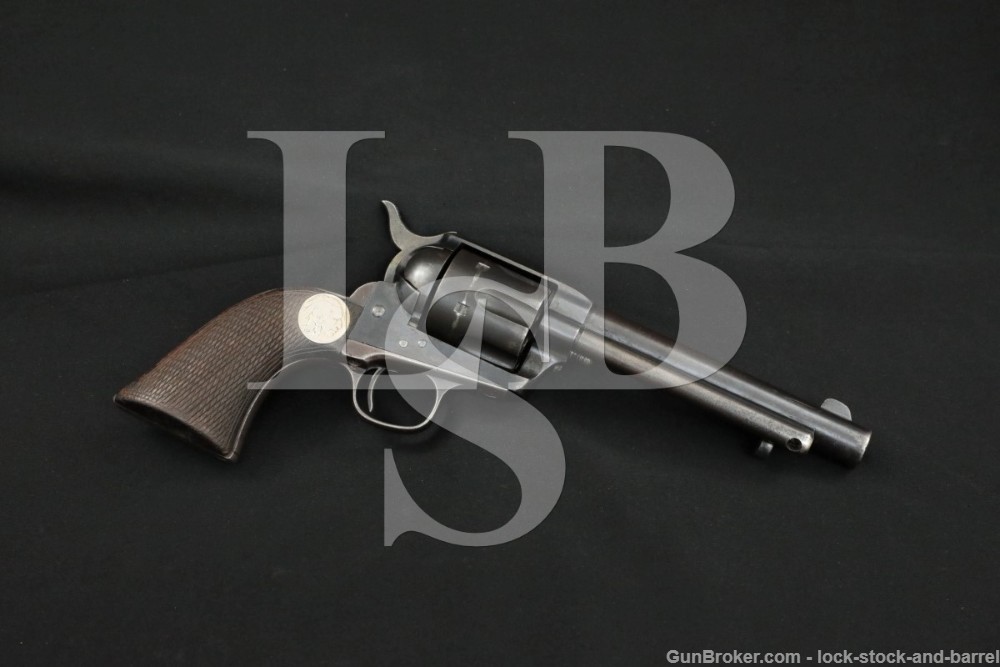 Year of Manufacture: The frame was made in 1891, the revolver was most likely altered by Springfield Armory in 1898.

Stock Configuration & Condition: The grip is one-piece hand-checkered walnut with a 1937 Indian Head nickel inlaid to the top-front on the right. The grip has light handling wear with some scattered light nicks and scratches. There are more notable dings on the bottom. There are a few tiny losses at corners and at the top of the nickel. There are no cracks. The checkering is generally well defined. The wood is shy to the frontstrap toward the bottom, but is otherwise generally well fit to the metal. Overall, the grip is in Very Good-plus condition as refinished Antique.

Bore Condition: The bore is light gray. The rifling is sharp where not interrupted by erosion. There is scattered light erosion and some pitting in the bore.

Overall Condition: This revolver retains about 65% of its current metal finish. The finish is thinning at all edges. There is scattered light finish wear on the barrel. The grip areas show more notable handling wear. The cylinder has a turn-line. There are several scattered light nicks and scratches. There is some scattered minor erosion, some under and some through the finish. There is wear on the front of the cylinder bushing. The ejector housing has a gap to the frame. The screw retaining the cylinder pin is disfigured with a useable slot. Other screw heads show tool use but have strong slots. The markings range from clear to worn and incomplete. Overall, this revolver is in Very Good condition as refinished Antique (see Mechanics).

Mechanics: The action functions correctly. The trigger is crisp. The cylinder has very little play when locked and has a removable bushing. We did not fire this revolver. As with all used firearms, a thorough cleaning may be necessary to meet your maintenance standards.

Our Assessment: Colt’s Single Action Army is, perhaps more than any other, an iconic American pistol. It was the U.S. issue sidearm for the last two decades of the 19th century, used by pioneers, outlaws and lawmen across the expanding nation, and captivated audiences on the silver screen and television (and still does, today). Many of the original 1873 Model revolvers were arsenal refurbished in 1898, including cutting the barrel down to 5 1/2″ from the original 7 1/2″, in preparation for use in the Spanish-American War. This appears to be one of those revolvers, referred to by collectors as “Artillery” models as most were issued to artillery units during the conflict. Unlike some refurbishment programs performed earlier, little care was given to preserving and none to re-marking matching serial numbers on the 1898 refurbished guns, resulting in mixed parts. This and service on the American frontier and/or in the Spanish-American War would certainly be consistent with this revolver’s present condition, though the “U.S” marking on the frame appears intentionally removed and this revolver may not have left service in a strictly appropriate fashion. The grip has also been customized with hand-checkering and a 1937 Indian Head nickel. This would be a nice addition to a Single Action Army or American military small arms collection. Please see our photos and good luck!