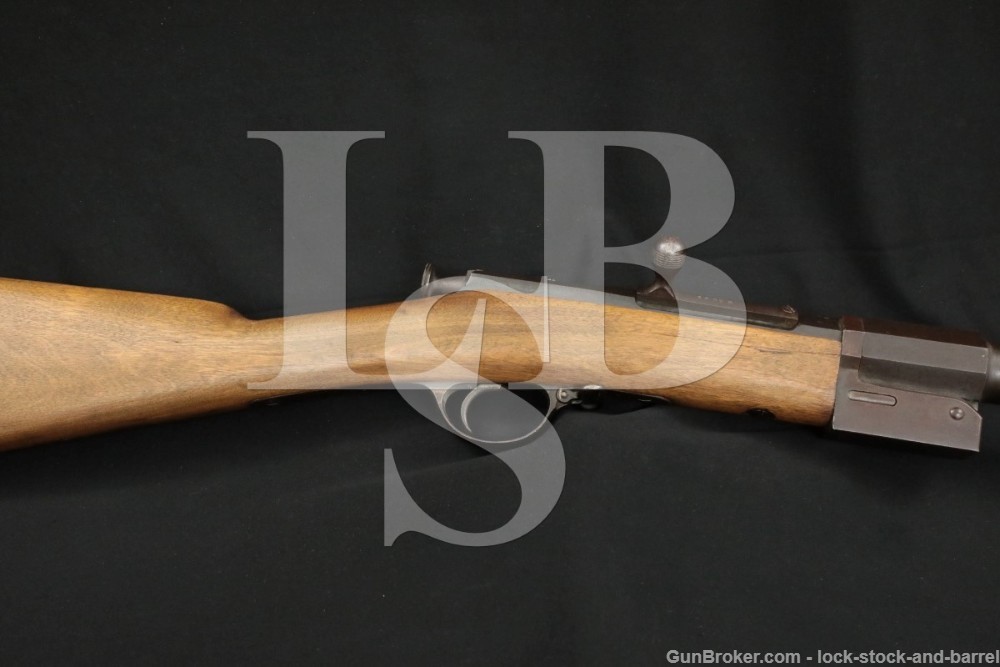 Make: Originally made in Russia, this was converted from a rifle to a flare gun by F. Miksch in Vienna, Austria.

Year of Manufacture: The donor rifle was originally manufactured between 1870 and 1891. The converted flare gun was accepted into Austrian service in 1917.

Markings: The left of the flare-gun action is mraked “F. MIKSCH / WIEN / 1014” and with a 1917 Wiener-Neustadt Austrian acceptance mark. The bottom of the barrel lug and the left shoulder of the Berdan receiver are also marked “1014”. The top of the Berdan receiver has a double-headed eagle Imperial Russian crest. The bolt locking lug is marked “16098” and the guide-lug is marked  “5356”. The buttplate is marked “35742”. There are a few other scattered inspection marks.

Stock Configuration and Condition: The stock is one-piece smooth wood with straight grip, straight comb, steel buttplate and a sling swivel in the belly. There is a filled hole in the belly in front of the swivel in the middle of a crack. There are cracks at the front edge of the guard, in front of the mounting screw escutcheon, a long crack at the right-front and a loss at the toe. There are some other scattered light nicks, scuffs and scratches. The LOP measures 14 1/4″ from the front of the trigger to the back of the buttplate. The plate has scattered scraping, erosion, and oxidation. Overall, the stock is in Good-plus condition as refinished Antique.

Overall Condition: This flare gun retains about 10% of its metal finish. Remaining finish is in the Berdan receiver, mottled with oxidation and some minor erosion. Other surfaces have gone to a moderate-dark patina showing oxidation and minor erosion. The screw heads range from sharp to tool marked with strong slots. The markings are generally clear, some of the inspection markings are hard to make out, but we also don’t speak Russian or Austrian. Overall, this flare gun is in about Good-plus condition.

Mechanics: The action functions correctly. We did not fire this flare gun. As with all used items, a thorough cleaning may be necessary to meet your maintenance requirements.

Box, Paperwork and Accessories: None.

Our Assessment: During the Great War, the Russians lost so hard they though Communism sounded like a good idea. It should come as no surprise, then, that the Central Powers captured a lot of equipment from Russian forces. But it was the 20th century! What was Austria to do with thousands of captured Berdan II rifles chambered for a black powder cartridge that they didn’t produce domestically? Chop ’em up and mount flare launchers to them, of course! This is a fairly scarce example of a Leuchtpistole mit Schaft, literally translated as “flare gun with stock”. It seems a little silly when the standard flare pistols were smaller, easier to carry and store, and didn’t really lose anything in terms of performance, but why make grips, hammers and sears when you can just chop up an otherwise useless captured rifle? This is an interesting and uncommon bit of Austrian kit from the first World War, and will make a great addition to a collection. Please see our photos and good luck!