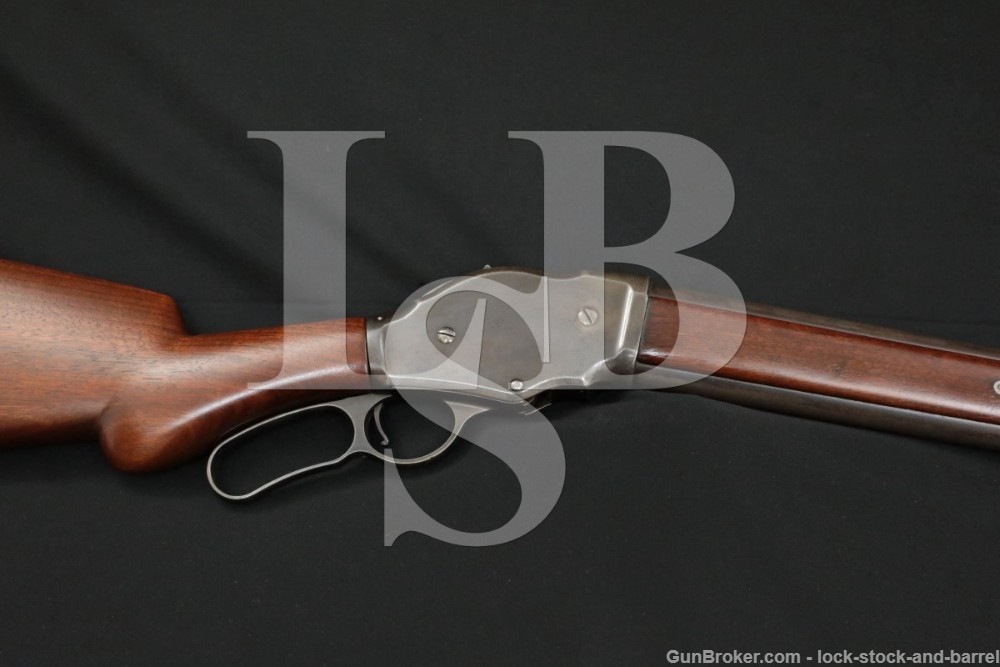 Sights / Optics: There is a brass-colored bead at the muzzle and the top-front of the receiver has a groove which serves as a sighting plane.

Stock Configuration & Condition: The stocks are smooth walnut round-knob semi-pistol grip, straight comb, a checkered metal butt plate and a smooth two-piece forearm. The buttstock is likely a replacement. The forearm has scattered nicks and scratches on both sides, and some discoloration from use near the front.  The butt stock has a few signs of operational wear, most notably a scratch just behind the top tang.  The LOP measures 13” from the front of the trigger to the back of the butt plate.  The plate has some oxidation and operational wear along the edges. The stocks rate in about Good overall condition.

Bore Condition: The bore is grey. There is some erosion and light pitting the length of the bore.

Overall Condition: This shotgun retains about 85% of its current metal refinish. The balance of the finish shows a steady oxidation and distribution of wear and use throughout the metal,with slightly more discoloration occurring to the magazine tube and barrel. The left side of the receiver has some scratches to the right of the “WRA Co.” symbol. The barrel has some scuff marks above the forearm.  The screw heads are tooled yet still remain serviceable. The markings are acceptable, the serial number is a little soft from the refinish. Overall, this shotgun rates in about Good condition.

Our Assessment: “The Winchester Model 1887 (Dellosso Shotgun) and Winchester Model 1901 are lever-action shotguns originally designed by famed American gun designer John Browning and produced by the Winchester Repeating Arms Company during the late 19th and early 20th centuries. The shotgun has become iconic for its use in the 1991 film Terminator 2: Judgment Day and the video game Call of Duty: Modern Warfare 2.”

An old classic that has since barged its way into popular culture.  Despite its age, it is as ready and capable for action as ever.  At home anywhere, from the range to collections to the movie set.