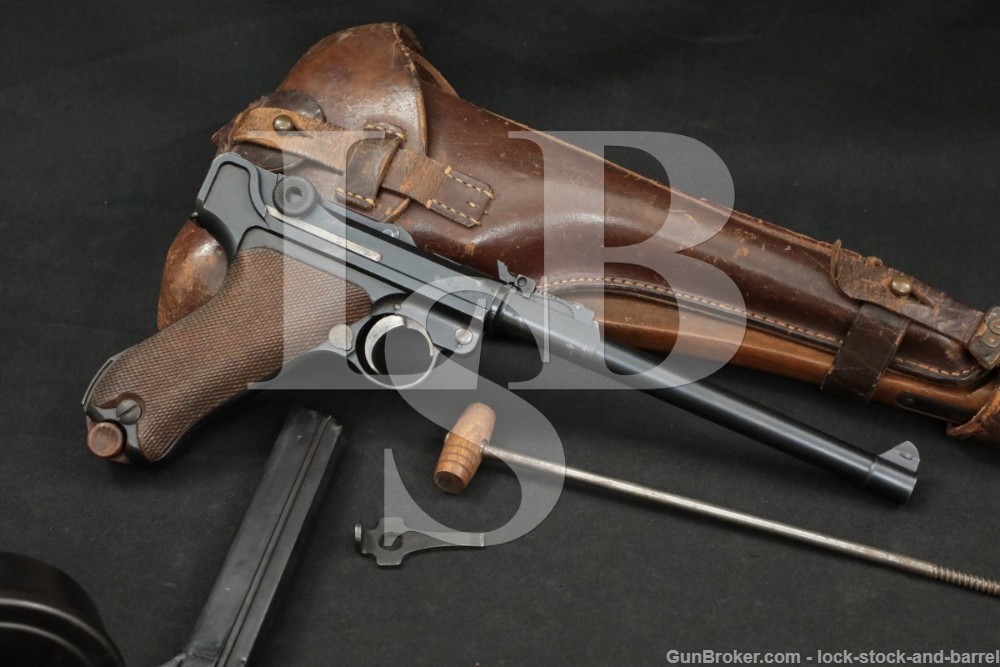 Stock Configuration & Condition: The grips are two-piece checkered walnut. The grips have light handling wear with some scattered light nicks and scuffs, most on the left panel. The checkering is generally well defined. There are no chips or cracks. Overall, the grips are in about Very Good-plus condition.

Bore Condition: The bore is light gray with sharp rifling. There is light erosion scattered through the bore.

Overall Condition: This pistol retains about 90% of its current metal finish. The finish is thinning at most edges. The majority of the balance is in scattered minor surface oxidation. There are several scattered nicks, most are under the finish. There are a pair of more notable nicks through the finish on the right of the barrel below the rear sight base. The strawed parts show finish wear. The action shows operational wear. The screw heads are lightly tool marked with strong slots. The markings are clear. Overall, this pistol is in about Very Good-plus condition as refinished.

Mechanics: The action functions correctly. The barrel assembly has no play to the frame. We have not fired this pistol. As with all used firearms, a thorough cleaning may be necessary to meet your maintenance standards.

Box, Paperwork & Accessories: This pistol comes with a brown leather flap-holster, a flat board shoulder stock, a cleaning rod, disassembly tool, a single 8-round magazine and a single 32-round Trommel or “snail drum” magazine. The holster is marked “F. GROSSE / DRESDEN-N / 1916”. The holster has scattered light wear and surface loss, most notable along the cleaning rod pocket, there is some fraying on the straps and the hinge of the flap, and the stitching is intact, in about Good-plus condition. The board shoulder stock is marked “1831” on the bracket and with a worn marking on the board. The wood shows scattered light nicks, scuffs and scratches, the metal shows light operational wear, and the leather shows scattered light wear, in about Very Good condition. The 8-round magazine has a wood floorplate, showing some light wear and oxidation, intact feed lips and a strong spring, in about Very Good condition. The Trommel magazine is marked “324692” and “B/N” on the front and rear (Bing Nurnberg), the rear is marked “12”, “17”, “22”, “27”, and “32”, the front is marked “A”, and the left of the feeding body is marked with a crowned gothic letter. There is some blue paint residue on the magazine. It shows light operational wear with intact feed lips and a strong spring. The magazine has some minor erosion under the finish. Overall, the magazine is in Fine condition as refinished.

Our Assessment: This is a Long P.08 Luger, also known by collectors as the “Artillery Luger”. The model was originally issued to field artillery, airmen and fortifications. The model had a longer, 8″ barrel and was equipped with more precise sights than the standard P.08. Later, it was designated for use by Sturmtruppen and other assault forces trying to breach the trench lines. It was the first Luger to use the 32 shot Trommel or “snail” magazine. Originally produced with “Fine Tuning” front and rear sights, in 1917 DWM would eliminate the adjustment of the front sight and very late in 1917, the fine adjustment would be discontinued for the rear sight, as well. This is a nice example which comes with a board-stock, holster, one standard magazine and a Trommel magazine. The pistol is in about Very Good-plus condition as refinished with 90% of its new blued finish remaining. The artillery models are always collectable: they are a very interesting looking weapon that almost everyone wants to own. This is a really nice example, and with its included accessories is sure to end up in a collection of Lugers alongside its P.04 and P.08 cousins. Please see our photos and good luck!