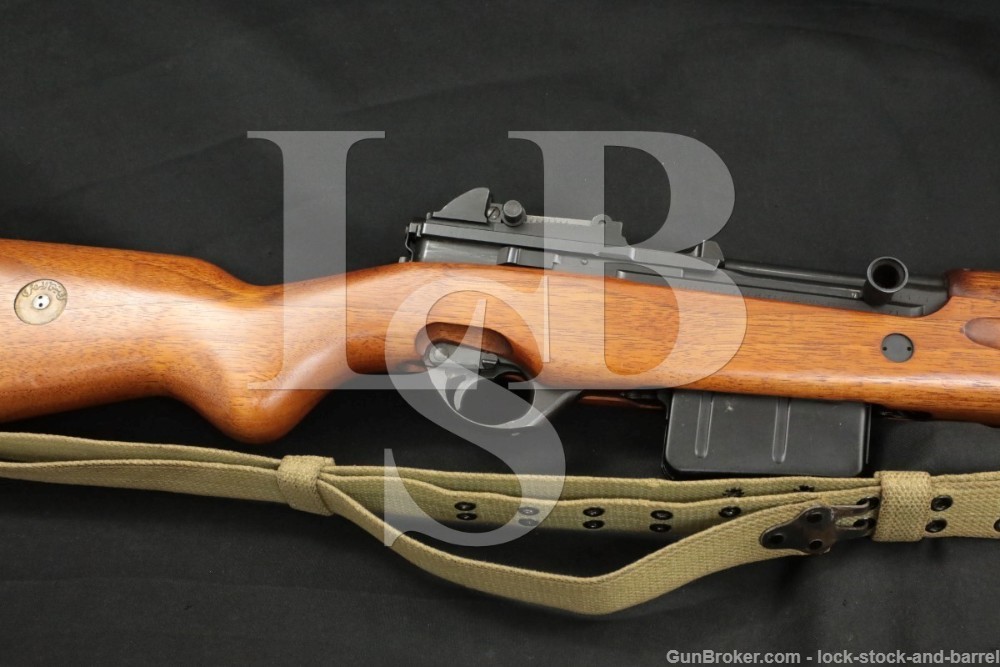 Stock Configuration & Condition: The hardwood stock has a pistol grip, finger grooves, metal nosecaps, barrel band, two sling loops, and a brass buttplate with hinged door for storage. Cleaning gear is stored in the butt. The buttplate shows small scrapes and oxidation. The nosecaps show scrapes on the left. The front left of the handguard shows a repaired hairline crack that does not flex when pressure is applied. The wood shows light scrapes, small scratches and shallow compression marks. The LOP measures 13 ? inches from the front of the trigger to the back of the buttplate. The stock rates in about Very Good Plus to Fine overall condition as refurbished.

Bore Condition: The muzzle and grooves are dark. The rifling is deep. There is erosion at the muzzle and in the grooves.

Overall Condition: This rifle retains about 97% of its metal finish as refinished. The metal shows scuffs & light handling marks. The front of the barrel and trigger guard also show scrapes. The screw heads show moderate use. The markings are deep. Overall, this rifle rates in about Very Good Plus condition.

Box, Paperwork & Accessories: The rifle comes with a magazine, web sling and cleaning gear. The refinished magazine has areas of surface erosion & oxidation showing through the finish. It shows scrapes. It is in about Very Good Plus condition. The hull, spring and follower are designed as one unit but the follower pops out of the hull when removed from the rifle. Magazines can only be loaded when in the rifle. This is the way the rifle magazine was designed; there is no defect.
The web sling shows scrapes & light surface erosion on the claw. The webbing shows discoloration, soiling, and small spots of fraying. Overall it is in about Very Good Plus condition. There is a plastic oiler stored in the butt. One side has a dropper attached to the cap. There is no oil. The other side contains a pull through thong & loop. The cap does not thread on this end as this end of the tube appears to have been damaged by heat. Overall the cleaning gear is in about Good condition.

Our Assessment: This FN 49 was made in Belgium by Fabrique Nationale for the Egyptian Military sometime between 1949 and 1961. It looks great as the metal & wood have been refinished nicely. The Arabic markings on the metal are still deep. This is a rifle for the collector who loves to shoot. An 8mm semi auto should be a lot of fun out at the range.