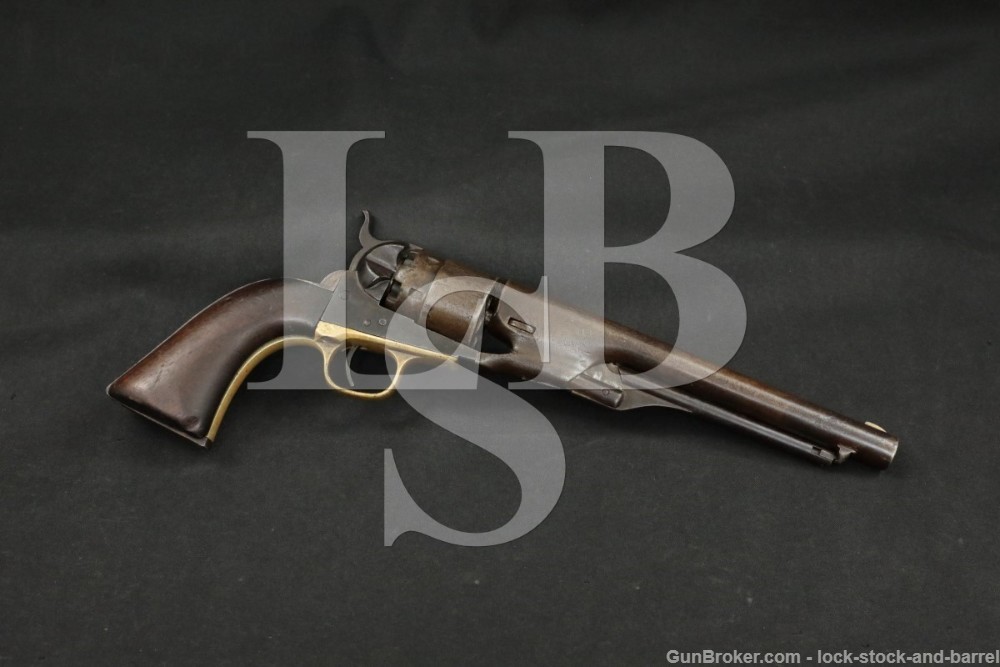 Stock Configuration & Condition: The grip is a one piece smooth walnut. The grip has moderate handling wear with scattered nicks, dings, scuffs and scratches. There is a loss at the bottom edge on the right toward the front which has been finished over. The grip is generally shy to the metal and has light play to the frame. There are no cracks. Overall, the grip is in about Good condition as refinished Antique.

Bore Condition: The bore is dark and the rifling is worn, but visible. There is erosion scattered through the bore ranging from light to severe.

Overall Condition: This revolver retains approximately 20% of its metal finish. Strongest finish is in the frame. The barrel and cylinder show scattered discoloration which may be from old cold-blue, it seems slightly too yellow to be a proper patina. There is surface erosion scattered throughout the steel parts. The brass guard has gone to a mustard patina with the crystalline appearance of old brass. There are some light nicks, scuffs and scratches. The action shows operational wear. There are tool marks at the bottom-rear edge of the barrel assembly. One of the nipples has been painted red and the interior of this chamber shows more erosion than the others at the flash-hole. The loading lever has moderate play when latched. The wedge has sheared at one end. The screw heads range from tool marked with strong slots to disfigured with useable slots. The markings range from clear to worn away or obscured by erosion. Overall, this revolver is in about Fair-Good condition as Antique.

Mechanics: The hammer has excessive play when at full cock. Otherwise, the action functions correctly. The barrel has no play to the frame, but the wedge is sheared on one end. The cylinder locks up with light-moderate play on each chamber. The trigger is crisp. We did not fire this handgun. As with all used firearms, a thorough cleaning may be necessary to meet your maintenance requirements.

Our Assessment: This firearm comes from the personal collection of Col. Carl Elliot Lundquist, whose distinguished military career spanned 30 years, starting with his 1927 graduation from West Point to his retirement as Colonel in 1957. In 1945, he commanded forces that would see to the ultimate destruction of the 6th SS Mountain Division—”Nord”—in the final months of World War II. He passed away in 1980.The Colt Model 1860 Army revolver was easily the most popular army revolver on both sides of the conflict during the American Civil War. Approximately 127,000 of these revolvers were purchased for use by Union forces and several of the Confederate states had obtained a few thousand before the start of the hostilities as well. The Model 1860 Army was the successor to the Third Model Dragoon and ranks third in total number produced of the various models of percussion Colt handguns. This revolver was made in 1863 and appears to have martial markings, though the metal surfaces do not retain all of their markings. All numbered parts are matching, however the wedge and cylinder do not have any visible serial markings. The revolver is in about Fair-Good condition as Antique with a bore which is not too bad for 150 years of black powder use and having some minor mechanical issues. This revolver is a decent example of the 1860 and was made during an important period of American history. Please see our pictures and good luck!