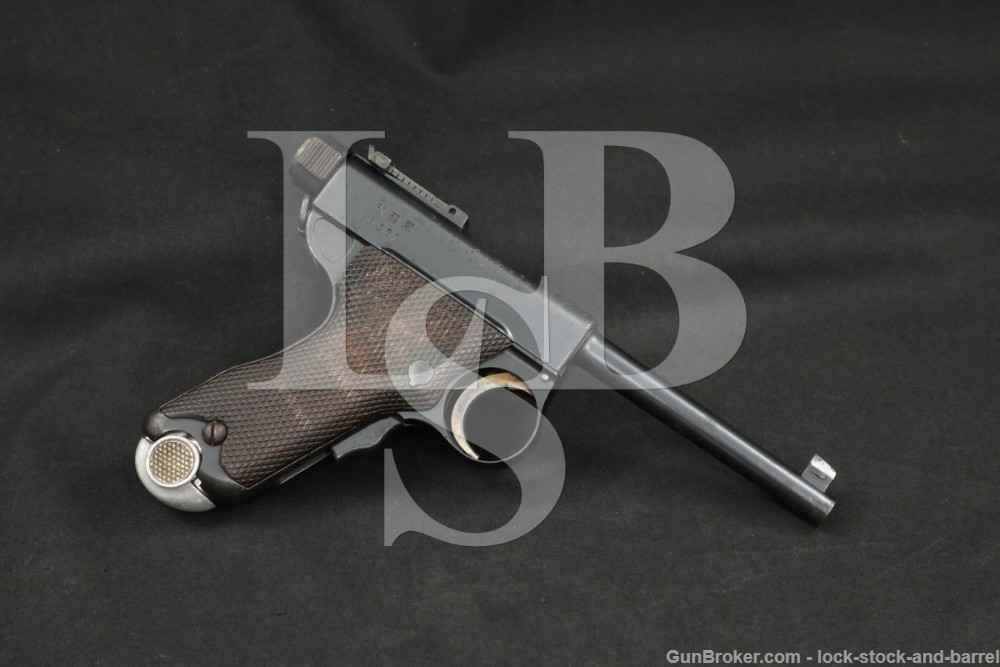 Sights / Optics: The front sight is a blade dovetailed into a base on the barrel. The rear sight is a “V”-notch tangent sight marked from 1-5 in hundreds of meters.

Stock Configuration & Condition: The grips are two-piece checkered wood. The grips have light handling wear. There are a few scattered nicks, scuffs and scratches, most notable on the left panel at the top. There are some scattered spots of light-colored residue in the well defined checkering. There are no chips or cracks. The right panel has very minor play to the frame. Overall, the grips are in Very Good condition as partially not original to the gun.

Bore Condition: The bore is semi-bright with well define rifling. There is some scattered light erosion in the bore.

Overall Condition: This handgun retains about 85% of its metal finish. The balance is mostly in surface erosion, most notable in the grip areas but with some scattered along the top of the frame and barrel. Otherwise, the finish is generally strong with some handling wear on the trigger, light operational wear, tool marks around the sear-bar retainer and light operational wear. The screw heads show erosion and tool use but retain strong slots. The markings are clear. Overall, this pistol is in about Very Good condition as not all-parts original.

Box, Paperwork & Accessories: This pistol comes with a single 8-round magazine. The magazine shows operational wear and some scattered minor erosion, with intact feed lips and a strong spring, in Good-plus condition.

Our Assessment: This is a Modified Type A Nambu, termed the “Papa Nambu” by American collectors. The pistol has slight improvements over the original “Grandpa” Nambu and was built between 1906-1923. Interestingly, these pistols were marked “Army Type”, but were never accepted by Japanese army, though they did see use by the Navy. It is chambered for the 8mm Nambu, a bottleneck cartridge that pushes a 102 gr. bullet at a little over 900 fps and has approximately the same power as a .380 ACP cartridge. The pistol has some replacement parts, but the major components share a serial number and the pistol has strong mechanics. The pistol is in about Very Condition with a decent bore, light operational wear, and some erosion on the barrel and frame. This will make a nice addition to a Japanese small arms collection. Please see our photos and good luck!