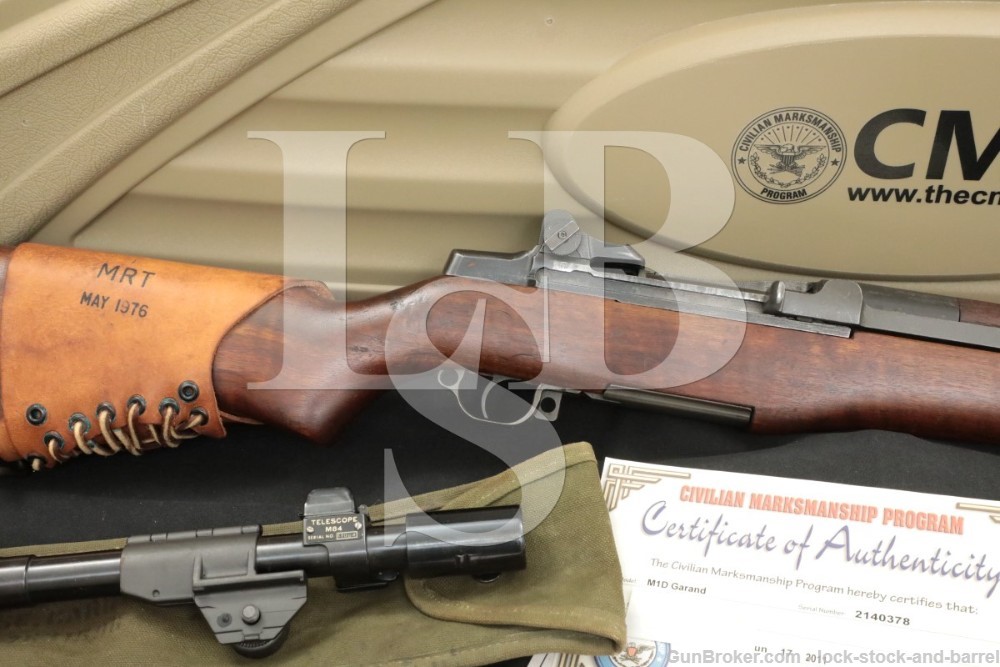 Sights / Optics: The front sight is a blade set between two protective wings. The rear sight is a fully adjustable aperture set between protective wings. The windage knob is marked “LEFT arrow” twice. The elevation knob is marked from “2-12” in increments of two and “UP arrow DOWN arrow / BATTLE triangle RANGE”.
The scope is attaches to the rifle with a two piece hinged mount. The mount has an included screw with an oversized head that mates with the base installed on the barrel. The scope is an M84 2.2 power that uses a thin post reticle. The scope appears to have been refurbished or repaired in the past as it no longer has a tapered post reticle (this is common). The scope has a sliding sunshade on the front of the tube and a rubber eyepiece on the rear. It has two adjustment knobs under metal flip caps that turn. The top knob is marked “0 1 2 3 4 5 6 7 8 9”. The side knob is marked “20 15 10 5 R 0 L 5 10 15 20”. The scope is marked “TELESCOPE / M84 / SERIAL NO. 41084” on the side plate and “7667474” underneath.  The tube & sun shade show scrapes, small scratches and a few spots of oxidation. The rubber eye piece shows scuffs & small scrapes. The view is mostly clear but does show a few small black flecks near the top edge. Overall the scope assembly is in about Very Good Plus to Fine condition.

Stock Configuration & Condition: The left side of the stock, above the trigger, is marked with a Defense “Eagle” Acceptance stamp. The face of the grip is marked with a “P” proof.
The three piece oil finished stock has a pistol grip, metal nose caps, two sling loops, stacking loop and a metal buttplate with a hinged door for storage. The buttplate shows several small scrapes & scratches as well as discoloration. The wood shows several scrapes, scratches and compression marks. Many have damaged small portions of the surface wood. These marks have been oiled over. The LOP measures 13 inches from the front of the trigger to the back of the buttplate. The stock rates in about Very Good overall condition.

Bore Condition: The bore is bright and the rifling is deep. There is no erosion. The bore shows an M.E. of 0.8. The throat shows a T.E. of 2.

Overall Condition: This rifle retains about 97% of its metal finish. The metal shows several scuffs, light scrapes and thinning on the leading edges of the metal. The barrel mounted scope base shows small scrapes & light thinning from the scope being installed. The right side of the receiver shows thinning from cycling. The markings are deep. Overall, this rifle rates in about Very Good Plus to Fine condition.

Box, Paperwork & Accessories: The rifle comes with an M84 scope assembly; see above. The rifle also comes with a Civilian Marksmanship Program (CMP) Certificate of Authenticity, CMP invoice, scope carrying case, leather cheek piece, T37 Flash Hider and a CMP hard case.
The CMP Certificate lists the purchaser’s name, the rifle’s serial number, the “JUN 17, 2011” purchased date and “Model: M1D Garand”. The certificate shows light creasing and is in about Fine condition.
The CMP Invoice lists a number of items purchased including this M1D. It lists “M1D Garand Field Grade / Springfield” and the rifle’s serial number. It shows soiling, creasing and compression marks. It is in a about Very Good condition.
The M84 carrying case is marked “CASE, CARRYING / 7631596”. The green canvas case shows soiling, discoloration and areas of fraying on the rear. Overall it is in about Very Good condition.
The leather cheek piece uses leather lacing to secure it to the rifle. It is marked “MRT / MAY 1976”. It shows discoloration, light creasing, and light compression marks. It is in about Very Good Plus condition.
The T37 Flash Hider shows scuffs and a few small scrapes. It is in about Fine condition.
The tan hard plastic CMP case is marked on both sides “CMP / www.theCMP.org” and with the CMP seal “stars / eagle holding arrows”. The interior of each case has foam pieces that show small compression marks and a few small cuts in the foam. The case has 4 latches and 4 reinforced locking holes. The cases show several scuffs, scrapes and small scratches. Overall the case is in about Very Good Plus to Fine condition.

Our Assessment: This Springfield M1D Garand Sniper Rifle was purchased through the Civilian Marksmanship Program (CMP) in 2011 and comes with a CMP Certificate of Authenticity. It is in nice shape and has a strong bright bore. It comes with an M84 scope assembly, T37 flash hider and a Civilian Marksmanship Program (CMP) hard case. The Springfield Armory M1D barrel is marked properly with the correct date and Drawing Number on the side of the barrel. M1D Garands are highly collectable rifles.
Here is some M1D information from Scott Duff (who literally wrote the book on the M1 Garand) over at scott-duff.com/the-m1d-sniper-rifle/:
“As all M1D rifles were rebuilt rifles, the receiver may be of any manufacture and of any serial number produced prior to the date of the rebuild. The same applies to the individual components, any part made prior to the date of the rebuild is correct. All M1D barrels were made by Springfield Armory. The earliest observed M1D barrel is dated 5-51. M1D barrels have been counterfeited and merit careful examination. Nearly all M1D barrels were stamped with drawing number D7312555. M1D barrels manufactured through the fall of 1952 had the drawing number stamped on the top, underneath the rear hand guard. M1D barrels manufactured after the fall of 1952 had the drawing number stamped on the right side, adjacent to the date. The total number of service grade rifles converted by the military to M1D configuration is unknown. However, it is certain that well over 10,000 were converted. No less than 5,000 M1Ds were sold or given to foreign nations. In 1993 and 1994 over 6,000 M1D rifles were deemed obsolete and destroyed under orders from the Secretary of the Army. Beginning in 1995, M1D rifles were sold by the Director of Civilian Marksmanship (DCM), the forerunner to the Civilian Marksmanship Program (CMP) to qualified individuals.”