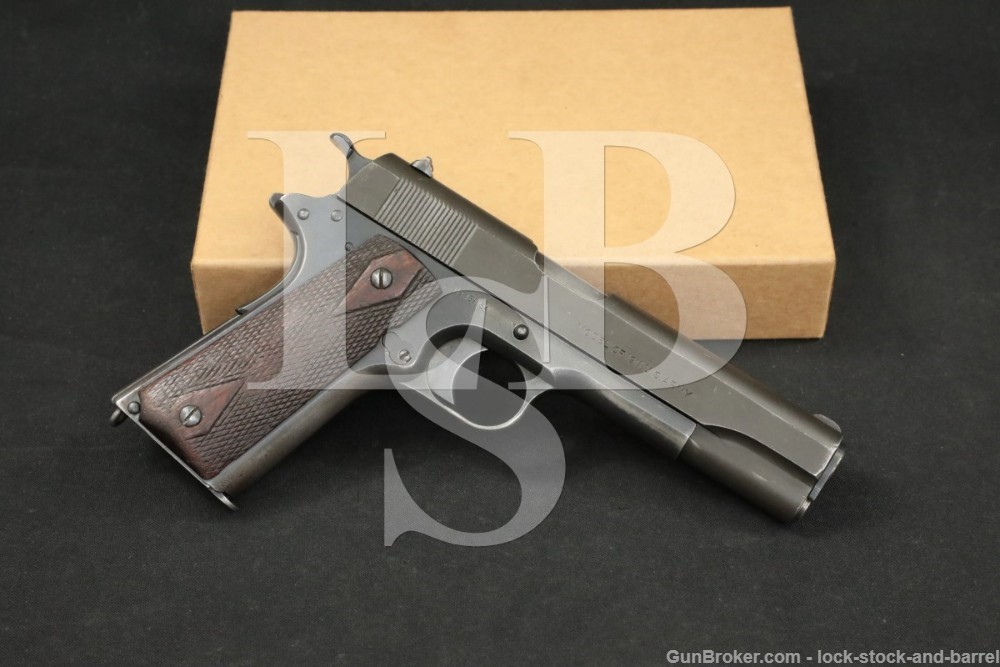 Stock Configuration & Condition: The grips are two-piece checkered walnut with smooth diamonds around the grip screws. The grips show light-moderate handling wear with some scattered nicks, scuffs and scratches. There are tool marks in the diamonds around the grip screws. The checkering is generally well defined with most notable wear toward the bottom of each panel and between the diamonds on the right panel. There are no chips or cracks. The top-right grip screw bushing’s outside threads are stripped, as are its threads on the frame. Overall, the grips are in about Good-Very Good condition.

Bore Condition: The bore is gray and the rifling is sharp. There is light erosion scattered through the bore.

Overall Condition: This pistol retains about 85% of its current metal finish. The finish is thinning at most edges. The most notable finish loss is handling wear in the grip areas, there is some rub-wear on the sides of the dust cover. There are some scattered light nicks and scratches with a minor “idiot mark” under the slide stop. The top-right grip screw bushing’s outside threads are stripped, as are its threads on the frame. The action shows operational wear. The screw heads are tool marked with strong slots. The markings are clear. Overall, this pistol is in about Good-Very Good condition as refinished and would easily rate Very Good but for the stripped bushing.

Mechanics: The action functions correctly. The top-right grip screw bushing’s outside threads are stripped, as are its threads on the frame. This pistol has both a manual and grip safety and the trigger pull is crisp. The slide has minor play to the frame. We did not fire this pistol. As with all used firearms, a thorough cleaning may be necessary to meet your maintenance standards.

Box, Paperwork & Accessories: This pistol comes with a single two-tone 7-round magazine. The magazine body comes down flush with the bottom edge of the floorplate and is secured with two rivets on each side. The magazine shows light-moderate operational wear, intact feed lips and a strong spring, in about Very Good condition. Also included is a Robert’s Arms Specialties Protecta-Gun two-piece cardboard box with a hand-written label which has this pistol’s information. The box shows little in the way of storage wear, in Fine-Excellent condition.

Our Assessment: The 1911 and 1911-A1 pistols served the military of the United States from 1911 to 1985, through two World Wars and the Korean and Vietnam wars. They gained a reputation as a reliable handgun with plenty of stopping power, and are held in high regard by those who have used them. This is a U. S. Government marked Colt 1911 pistol made toward the end of WWI in 1918 and subsequently refurbished. The pistol is in about Very Good condition, retaining about 85% of its new metal finish. There is a circled “S” on the frame, typically associated with R.F. Sedgley, and believed by some to have been marked on frames refurbished for the USMC. It also has the heart-shaped cuts in the frame under the grip panel, a feature which cut down on machining to speed up wartime production. It even features a palindromic serial number, rounding out the nifty features of the gun. The pistol shows wear that is pretty light for a military sidearm that’s more than 100 years old. This should make a nice addition for the 1911 collector and should still make for a good shooter. Please see our photos and good luck!