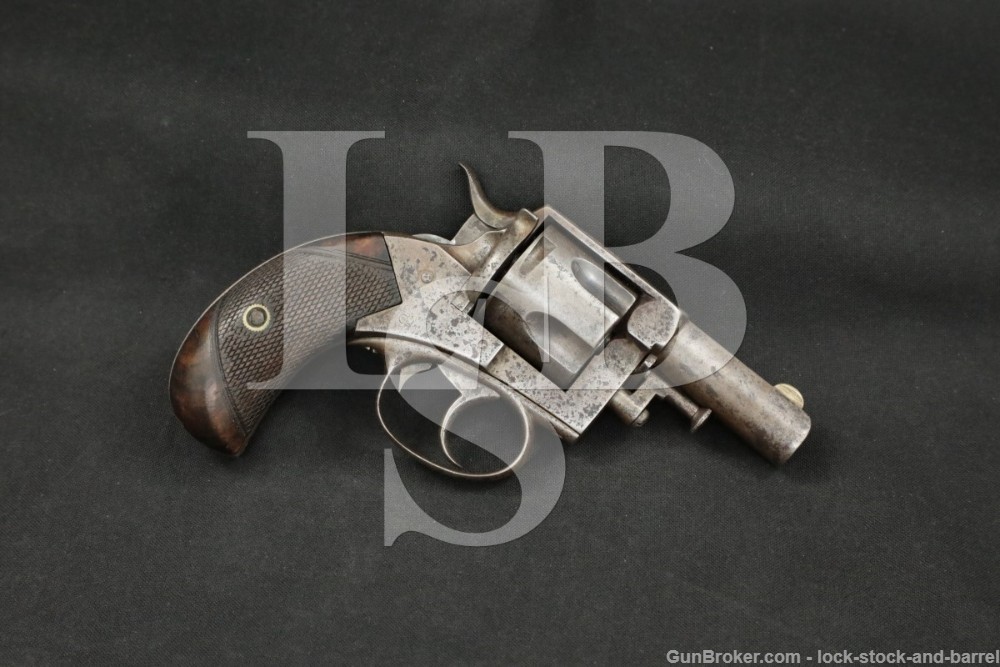 Sights / Optics: The front sight is a blade fixed to the barrel. The rear sight is a wide, shallow “V”-notch integral to the topstrap.

Stock Configuration & Condition: The grips are checkered walnut panels. The grips have light handling wear with some scattered nicks, scuffs and scratches. The checkering is generally well defined. There are no chips or cracks. Overall, the grips are in about Fine condition as Antique.

Bore Condition: The bore is semi-bright. The rifling is sharp where not interrupted by erosion. There is some scattered light erosion and infrequent pitting in the bore.

Overall Condition: This handgun retains about 5% of its metal finish. Finish remains only in the cylinder flutes. Other surfaces are mostly worn to white or gone to a light patina. There is some scattered surface erosion. There are some scattered light nicks, scuffs and scratches. The screw heads range from sharp to disfigured with a questionably useable slot. The markings range from clear to worn, but legible. Overall, this revolver is in about Very Good condition as Antique.

Mechanics: The action functions correctly. The cylinder locks up with moderate play on each cylinder. The double action trigger pull is smooth. The single action is crisp. We did not fire this handgun. As with all used firearms, a thorough cleaning may be necessary to meet your maintenance standards.

Our Assessment: Webley is a name which will forever be linked with British revolvers. For decades, they produced a variety of firearms from sporting shotguns to early automatic pistols, but revolvers were their bread and butter. The No. 2 Bulldog was produced as a compact revolver for pocket carry. They were quite popular and spawned a myriad of copies around the world. This Webley Bulldog is chambered for the .380 Webley centerfire cartridge and was made between 1881 and 1897, before Webley merged with W&C Scott to form Webley & Scott. The revolver is in pretty good shape for a 120+ year old concealed carry revolver. It will make a nice addition to a Webley or pocket pistol collection. Please see our photos and good luck!