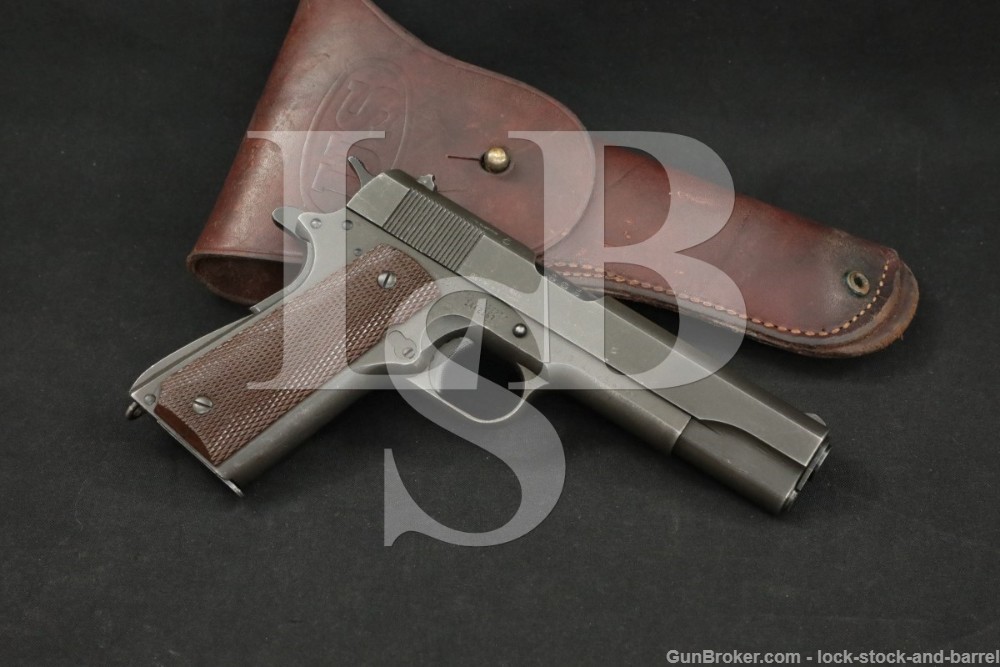 Markings: The left side of the slide is marked “ITHACA GUN CO., INC / ITHACA, N.Y.”. The left of the frame below the magazine release and the top of the slide in front of the rear sight are marked with a “P” acceptance proof. The left side of the frame above the magazine release has a faint “FJA” mark (Frank J. Atwood Lt. Col., Sub-Inspector for Ithaca, Remington Rand and Union Switch), the right behind the grip has an Ordnance mark. The right side of the frame is also marked “UNITED STATES PROPERTY / NO. 1442167” and “M1911 A1 U.S. ARMY”. The left of the trigger guard has an Ithaca inspection mark, the right has “3”. The left link-lug of the barrel is marked “P”, the right “F” (Flannery Bolt Co.). The barrel’s chamber has “BV”, “BP” and “NP” in crowned circles. The top-right of the slide behind the ejection port has “NOT ENGLISH MAKE” and “BV” in crowned circle, the right slide flat is marked “RELEASED / BRITISH GOVT. 1952”. The right of the frame has “BV” in crowned circle and a Birmingham crossed swords proof under the Ordnance marking with “DB / 1” (1953), “NOT ENGLISH MAKE” is marked at the serial number.

Stock Configuration & Condition: The grips are checkered brown plastic with reinforcement ribs on the inside, without reinforcement rings at the grip screws. The grips have minor handling wear with only a few scattered minor nicks and scuffs. There are no chips or cracks. The checkering is generally sharp. Overall, the grips are in about Fine-plus condition.

Overall Condition: This pistol retains about 90% of its metal finish. The finish is thinning at all edges. There are some scattered nicks, scuffs and scratches. There is a light “idiot mark” under the slide stop, most notable in the trigger relief cut. There is handling wear in the grip areas. The action shows operational wear. The screw heads are sharp. The markings are clear except for the FJA marking and the Ordnance wheel on the right of the frame. Overall, this pistol is in about Very Good-Fine condition.

Box, Paperwork & Accessories: This pistol comes with a brown leather flap holster and a single 7-round magazine. The holster is marked “US” in oval on the flap and “BOYT / -44-” on the belt loop. The holster has scattered wear and discoloration, verdigris at metal parts, and the stitching appears to be intact, though there are a couple of stitch-holes in the belt-loop assembly which were not stitched. Overall, the holster is in about Good-plus condition. The magazine has minor operational wear, intact feed lips and a strong spring, in about Fine condition.

Our Assessment: As was the case in the previous Great War, the outset of WWII found many nations starved for small arms, procuring just about anything they could get their hands on to arm their troops. Prior to the United State’s entry to WWII, there were various methods of supplying the Allies with defense products while maintaining neutrality, the final being the Lend-Lease Act which permitted the sale, lending and leasing of defense equipment to Allied nations by the U.S. government. This Ithaca 1911A1’s British proof markings indicate that it is one that was sold to the British government under the Lend-Lease Act in 1943, later to be sold out of service in 1952. This Lend-Lease example is in Very Good-Fine condition with 90% of its parkerized finish remaining. The bore is nice and its mechanics are strong. This would still make a great shooter, but with this pistol’s history it will also be of great interest to Colt and WWII collectors. Please see our photos and good luck!