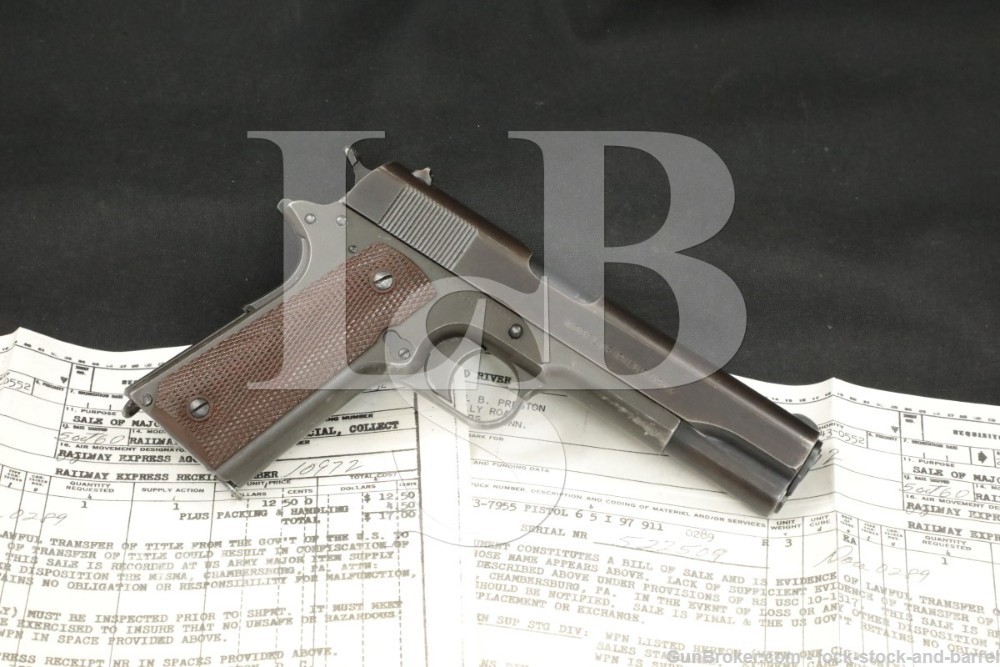 Sights / Optics: The pistol is mounted with a square notched rear sight dovetailed into the slide and a short rounded blade front sight fixed to the slide.

Finish Originality: The slide’s finish appears original, the frame has been refinished.

Bore Condition: The bore is gray and the rifling is sharp. There is light erosion scattered through the bore.

Overall Condition: This pistol retains about 70% of its metal finish. The finish is thinning at all edges. The frame’s finish is generally strong with light handling wear, some wear on the dust cover, and some scattered light nicks and scratches. The mainspring housing has minor surface erosion. The slide has mostly gone to a light patina with stronger blue in protected areas such as the scallops in front of the dust cover, on the rear, and around the sights. The slide has a few light nicks and scratches with a spot of erosion on the right-rear. There is light erosion on the slide stop. The action shows operational wear. The screw heads range from sharp to tool marked with strong slots. The markings are clear. Overall, this pistol is in about Very Good condition as partially refinished.

Mechanics: The action functions correctly. It has both a manual and grip safety and the trigger pull is crisp. The slide has minor play to the frame. We did not fire this pistol. As with all used firearms, a thorough cleaning may be necessary to meet your maintenance standards.

Box, Paperwork & Accessories: This pistol comes with a single 7-round magazine marked “R” on the top of the floorplate. The magazine shows light-moderate operational wear, intact feed lips and a strong spring, in about Very Good condition. Also included is a DD form 1149-3 in triplicate and a form DD from 1149-4, showing this pistol by serial number being sold out of service in October 1960.

Our Assessment: The 1911 and 1911-A1 pistols served the military of the United States from 1911 to 1985, through two World Wars and the Korean and Vietnam wars. They gained a reputation as a reliable handgun with plenty of stopping power, and are held in high regard by those who have used them. This is a U. S. Government marked Colt 1911 pistol made toward the end of WWI in 1918. The pistol is in about Very Good condition, retaining about 70% of its metal finish with late war bluing on the slide, sometimes referred to as a “black” finish, due to its darker and more matte coloring than the early Colt bluing, and a parkerized frame. The pistol shows wear that is pretty light for a military sidearm that’s more than 100 years old, especially one which remained in inventory from 1918 to 1960. This should make a nice addition for the 1911 collector and should still make for a good shooter. Please see our photos and good luck!