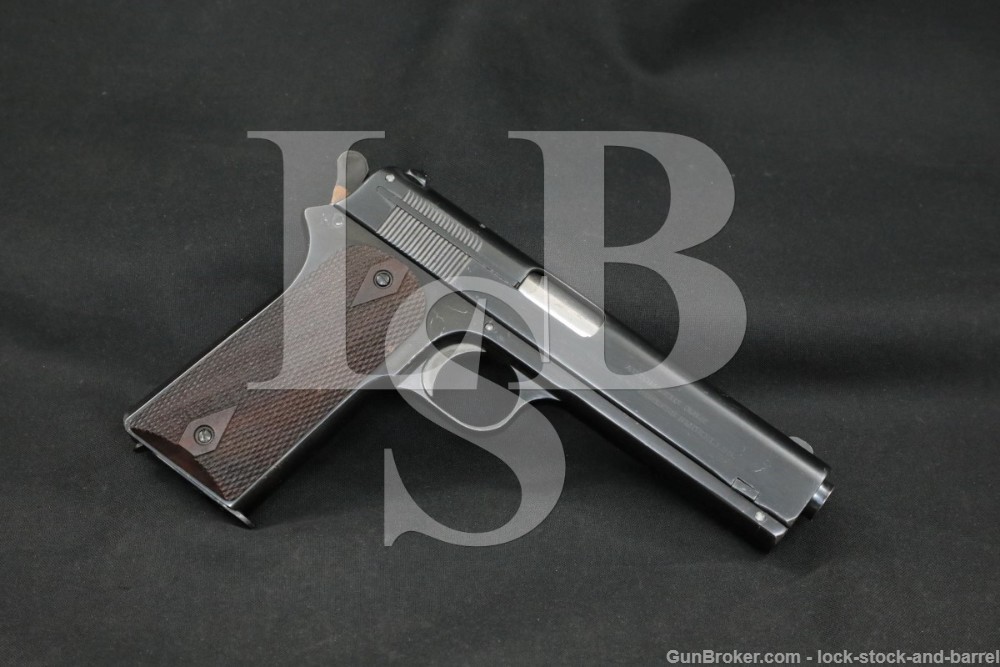 Stock Configuration & Condition: The grips are two-piece checkered wood with smooth diamonds around the grip screw escutcheons. The grips have only a few scattered minor marks, most in the right panel. The checkering is generally sharp. There are no chips or cracks. Overall, the grips are in about Fine-Excellent condition as not original to the gun.

Bore Condition: The bore is semi-bright. The rifling is sharp where not interrupted by erosion. There is light erosion scattered through the bore with less frequent minor pitting.

Overall Condition: This handgun retains about 90% of its current metal finish. There are several scattered minor nicks, scuffs and scratches with some under and some through the finish. There is some scattered minor surface oxidation, mostly in the grip areas. There is infrequent minor erosion under the finish, most notable around the hammer screw on each side of the frame. The hammer has areas which show a plum/orange hue. The action shows light operational wear. The screw heads range from sharp to tool marked with strong slots. The pin heads are unmarred, though there are tool marks around the pin heads. The markings are generally clear, the circle around the rampant colt is incomplete. Overall, this pistol is in about Very Good condition as refinished.

Mechanics: The action functions correctly. The slide wedge is present and its indexing stud is intact. The trigger pull is crisp. The slide shows barely perceptible play to the frame. This pistol does not have a safety but does have a half-cock position on the hammer. The magazine release is on the bottom of the butt. We did not fire this handgun. As with all used firearms, a thorough cleaning may be necessary to meet your maintenance standards.

Box, Paperwork & Accessories: This pistol comes with a single 7-round Colt 1905 magazine. The magazine has light operational wear, some minor erosion under the finish, the top portion has been polished bright, the feed lips are intact, the spring is strong. Overall, the magazine is in about Very Good condition as refinished.

Our Assessment: The Ordnance Department of the U.S. Army convened a board of two men, Capt. John t. Thompson and Maj. Louis A. La Garde to determine a minimum handgun caliber for use by the U.S. Military in 1903. In 1904, a month before the report was released, Union Metallic Cartridge Company (U.M.C.) received “figures for the proposed ctgs.”. UMC began work on cartridges, and shortly thereafter Colt set to work experimenting on a .45 caliber pistol based on their 1902 Military model. U.M.C. came up with a rimless .45 cartridge that they were producing by April 1905. Meanwhile, Colt had John M. Browning try to figure out how to handle the stresses caused by higher powered cartridges using the M1902 pistol as a baseline. By May 1905, Browning had applied for a patent covering a new barrel design with locking lugs on the bottom to lock it to the frame. In 1907, Army tests began on guns from 8 different manufacturers, which was narrowed down to Colt’s Model 1905 and pistols from Savage and Luger. Changes were requested, and Colt came up with a prototype of the new Model 1907 by Sept.1907. Only about 207 of this new model were made, making them some of the most desired collector guns in the world. Further modifications resulted in the Model 1911, which was adopted by the Army and is still in use until this day as the M1911-A1. Although the M1905 wasn’t adopted by the Army, they were made and sold commercially except for those used in government testing. The oil polished mirror finish Colt put on the pistols, with a fire blue or case-colored finish on the smaller parts, made them very desirable. This M1905 pistol was made in 1907, fairly early in production. It has about 90% of its new blue finish remaining, and is in about Very Good condition. The bore has erosion, but retains strong rifling. The mechanics are still quite good with good slide-to-frame fit, a crisp trigger, and the indexing stud on the slide wedge is still intact, frequently these are broken from improper assembly/disassembly. The grips are reproductions in Excellent condition. This model, along with its M1900 and M1902 predecessors, is a must-have amongst Colt collectors as being the first of the large framed Colt semi-automatics. As only 6,210 of the M1905 pistols were made, they become even more desirable with every passing year. We expect the collectors of Colt autos are going to be interested in this pistol. Please see our photos and good luck!