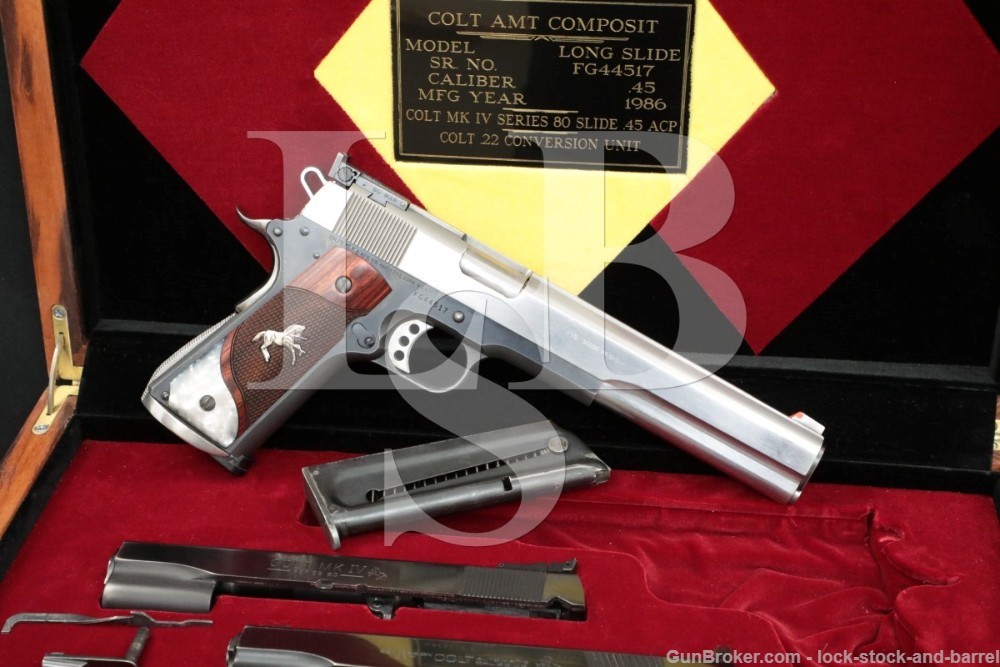 The left of the Colt slide is marked “COLT MK IV / -SERIES 80-” and with a rampant colt, the right is marked “GOVERNMENT MODEL”, the barrel is marked “-COLT 45 AUTO-“.

The AMT slide’s markings are very faint and incomplete with the left showing “ER” (the end of “HARDBALLER”), an AMT logo, and “LONG SLIDE / CALIBER 45”, the right has “ESS” (the end of “STAINLESS”) and “MADE IN U S A “.

The .22 Conversion Unit’s front sight is a blade fixed to the front of the slide, the rear sight is a square notch adjustable for windage and elevation in a base pinned to the rear of the slide.

The AMT slide’s front sight is a blade with an orange insert in the rear face, fixed to the front of the slide. The rear sight is a Bo-Mar square notch adjustable for windage and elevation, dovetailed to the rear of the slide.

Stock Configuration & Condition: The grips are two-piece checkered wood and faux-pearl with silver-colored rampant colts inlaid on each panel. The grips have no notable wear or damage, only light handling marks. The checkering is sharp. There are no chips or cracks. Overall, the grips are in about Excellent condition as not original to the gun.

Finish Originality: The .22 Conversion Unit and the frame have Original blue finish. The MK IV and AMT slides have been refinished. Several parts are not original to the gun.

Bore Condition: The bores are bright, the rifling is sharp. There is no erosion in any of the bores.

Overall Condition: This handgun set retains about 94% of its metal finish. The blued parts have thinning at most edges. There are some scattered light nicks, scuffs and scratches. The action shows operational wear. The Series ’70-style collet bushing on the AMT slide assembly has a crack on the right side. The parts show operational wear. The screw heads are tool marked with strong slots. The markings range from clear to worn and incomplete. Overall, this pistol set is in about Very Good condition.

Mechanics: The Series 70-style bushing on the Hardballer slide assembly has a crack on the right side. The action functions correctly with the AMT and .22 Conversion Unit, no guide rod or recoil spring assembly are included for the MK IV slide assembly, so we could not properly test its function. We see nothing to indicate that it will not function correctly with properly installed parts. The trigger is crisp and the slide to frame fit has light play with each slide assembly. We have not fired this pistol. As with all used firearms, a thorough cleaning may be necessary to meet your maintenance standards.

Box, Paperwork & Accessories: This gun comes in a custom french-fit display case which holds the pistol with AMT slide installed, MK IV slide assembly, .22 Conversion Unit slide assembly, .22 magazine and there is a lidded accessory compartment which is currently holding the ejector, guide rod, recoil spring and slide stop for the .22 Conversion Unit. A single 8-round Wilson Combat magazine and a single 10-round Colt .22 magazine are included. The inside of the case is lined in red, black and yellow felt, the inside of the lid has a plate marked “COLT AMT COMPOSIT / MODEL LONG SLIDE / SR. NO. FG44517 / CALIBER .45 / MFG YEAR 1986 / COLT MK IV SERIES 80 SLIDE .45 ACP / COLT .22 CONVERSION UNIT”. The case has minor storage wear on the exterior and minor wear from the contents on the interior, in about Fine condition. The magazines show light operational wear, intact feed lips and strong springs, in about Very Good-Fine condition.

Our Assessment: This is quite the set! Starting with a Colt MK IV Series ’80 Government Model, this pistol set also comes with a 7″ AMT Hardballer Long Slide assembly and a Colt .22 Conversion Unit. Both of the .45 slide assemblies have been modified with target sights, the MK IV slide has also had ball-cuts at the rear sight on each side. The frame has been upgraded with an extended slide release, beavertail grip safety, checkered arched mainspring housing with beveled magazine well, skeletonized hammer and trigger, and a beautiful set of custom grips. The whole set is housed in a very handsome display case custom fit for each assembly in the set. With magazines included for each caliber, this will make a fine set for the shooters as well as a great display. Please see our photos and good luck!