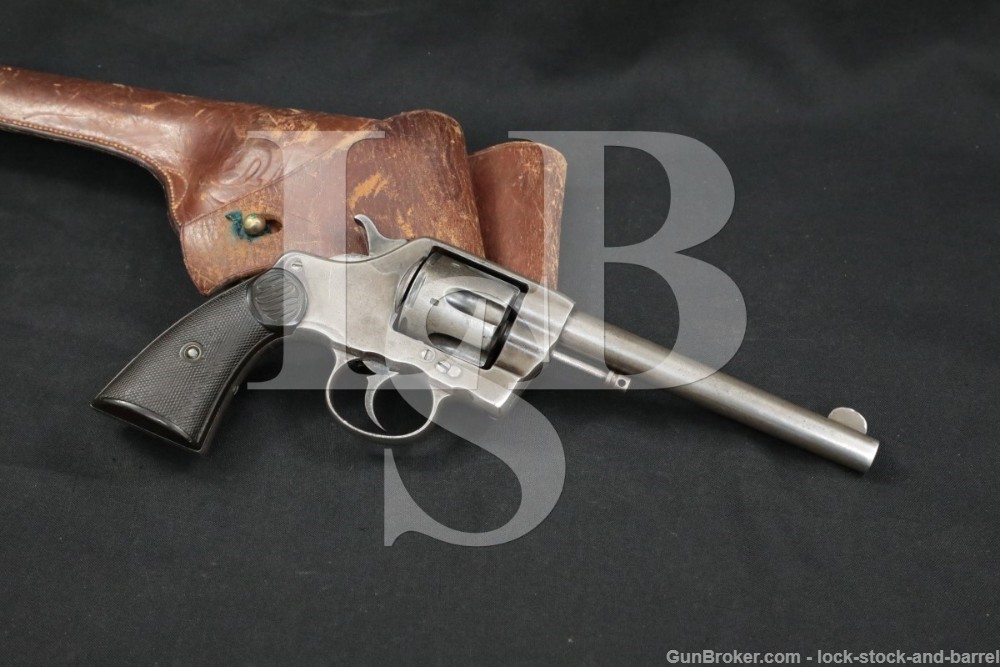 Sights / Optics: The front sight is a half round blade fixed to the barrel. The rear sight is a “U” shaped groove in the top of the receiver.

Stock Configuration & Condition: The grips are two-piece checkered black hard rubber with “COLT” in oval at their tops. The left panel has a chip-loss at the bottom-front corner. There are scattered light nicks, scuffs and scratches. The checkering shows handling wear, but is generally well defined. There are no cracks. Overall, the grips are in about Good condition.

Finish Originality: We suspect that this revolver just shows wear consistent with its age and use, it is possible that it was arsenal refurbished at some time in the past.

Bore Condition: The bore is dark and the rifling displays wear but is highly pronounced. There is moderate erosion throughout the bore.

Overall Condition: This handgun retains about 7% of its metal finish. Finish remains only in protected areas such as around the latch, below the cylinder on the left of the frame and on the side faces of the trigger toward the top. Other surfaces have mostly worn to white, showing minor surface oxidation, scattered nicks, scuffs and scratches, and infrequent minor erosion. The screw heads range from sharp to tool marked with strong slots. The markings range from clear to worn and incomplete. Overall, this revolver is in about Good condition.

Mechanics: The action functions correctly. The cylinder lockup has considerable side to side play with the trigger depressed on all chambers. We did not fire this handgun. As with all used firearms, a thorough cleaning may be necessary to meet your maintenance standards.

Box, Paperwork & Accessories: This revolver comes with a brown leather flap-holster marked “US” in oval on the front, the back of the belt loop is marked “ROCK ISLAND / ARSENAL / 1910 / H.E.K.”. THe holster has scattered wear, scuffing, discoloration and there is verdigris at the metal parts. The stitching is intact. Overall, the holster is in about Good-plus condition.

Our Assessment: Colt’s Model 1889 revolver was revolutionary, the first of the now traditional swing-out cylinder designs. In a series of design updates, the 1889 would evolve into the 1892, 1894, 1895, 1896, 1901 and 1903 New Army and Navy models, the Army Special, and eventually the Official Police which would remain in production until 1970. This example is a Model 1896 produced in 1898 and issued by the US Navy. It is even listed in the Springfield Research Service records, sent to the US Coast Guard Depot from Monmouth Beach in October of 1927! This will make a neat addition to a Colt or early service revolver collection. Please see our pictures and good luck!