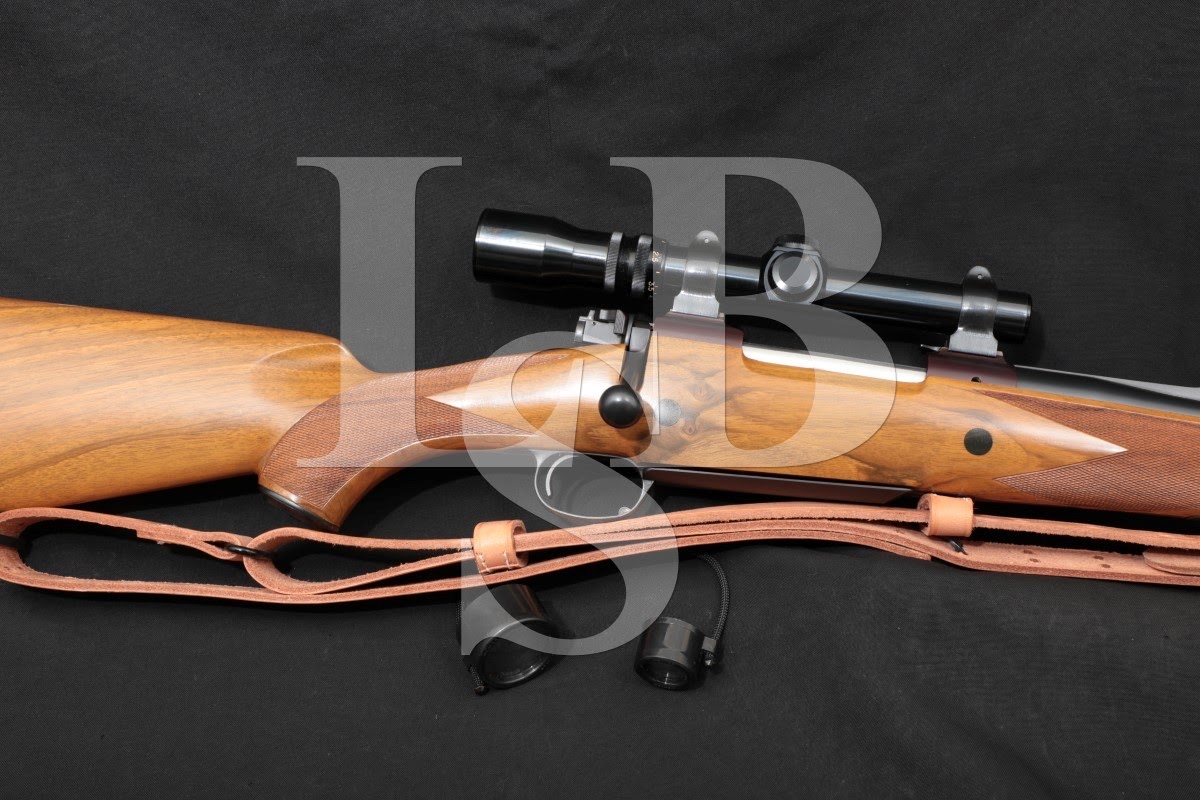 Markings: The left of the barrel is marked “KIMBER OF OREGON, INC., CLACKAMAS, OREGON, U.S.A.” and “.416 Rigby”. The left of the receiver is marked with the serial number and “Kimber AFRICAN”. The underside of the base of the bolt handle is hand inscribed “246”.

Sights / Optics: The front sight is a brass beaded blade housed in a slotted ramped barrel band base. The front sight has a flip-up white bead and the base is slotted for a protective hood, one comes installed. The rear sight is a two-leaf express sight dovetailed into quarter length rib fixed to the barrel. One sight is fixed and has a white line aiming reference at the bottom of a wide “V” valley and the second is a flip-up sight with a shallow “V” valley. The top of the receiver has integral bases that are installed with a pair of two-piece quick detach rings holding a 1.5-4.5×20 Micro-Trac scope. The scope has some little nicks into the finish mainly located in front of the adjustment knobs. The scope has a duplex reticle and the glass is clear. The scope rates in about Fine condition.

Stock Configuration & Condition: The stock is a one-piece checkered walnut with dark forend cap, metal capped pistol grip, fluted straight comb with cheekpiece, inlet sling mount in the belly, twin wood capped recoil crossbolts, and a solid brick red rubber Kimber buttpad. The pistol grip cap has a hinged door for storage. The second sling swivel is mounted to a barrel band base. The left front crossbolt plug’s finish displays some crazing. There are a few light compressions and a few marks into the finish, the most noticeable is on the right side of the forend at the top border of the checkering about 1” back from the start of the ¼ rib. Some more marks can be viewed at about bottom of the forend, rear edge of the cheekpiece, and comb. There is light finsih loss on the rear edge of the pistol grip on the wood. The checkering is mainly sharp with a few lightly nicked peaks. There are no chips or cracks. The LOP measures approximately 14” from the front of the trigger to the rear of the textured pad. The pad has light wear and some light discoloration. The stock rates in Fine Plus overall condition.

Overall Condition: This rifle retains about 97% of its metal finish. The bolt has some light marks on the knob from use. The tang has some marks into the metal on the right side of the striker channel. The receiver has a plum hue, those familiar with these Kimbers will know that this is common and not from misuse. The bottom metal has some light thinning on the edges and a very fine scratch at the rear. of the floorplate The barrel has some light handling marks. There are a couple tiny dings into the finish on the trigger guard. There are some light handling marks on the barrel and a little mark on the front sight riser under the factory finish. The front sight hood has a few light scuffs. The screw heads are undamaged. The markings are clear. Overall, this rifle rates in about Fine Plus condition.

Box, Paperwork & Accessories: The rifle comes with a Brownellls military style leather sling and the previously described scope. The sling has a few light scuffs and hardly any creases, in about Fine condition.

Our Assessment: The Kimber 89 BGR, or Big Game Rifle was introduced in 1988 after the company had success with their earlier Model 84 which used small calibers. The rifle was a hit and soon the demand overwhelmed production capabilities, and this ultimately led to their liquidation in 1991. They later reformed, but did so in Yonkers, New York with different backers and business interests. Collectors hold the Clackamas Oregon Kimbers in high regard, after picking it up you will see why. This is the African Model in .416 Rigby which features really nice walnut with beautiful checkering that really pops against the beautiful matte blue finish. Due the business struggles we mentioned, it is estimated that only 5,000 BGRs were even made. Those 5,000 include every grade made, and it is known that when you come across a model such as the African, it is a serious find…it is said that only a few hundred of this model were made. This rifle would make a great addition to just about any safe in America. Please see our photos and good luck!