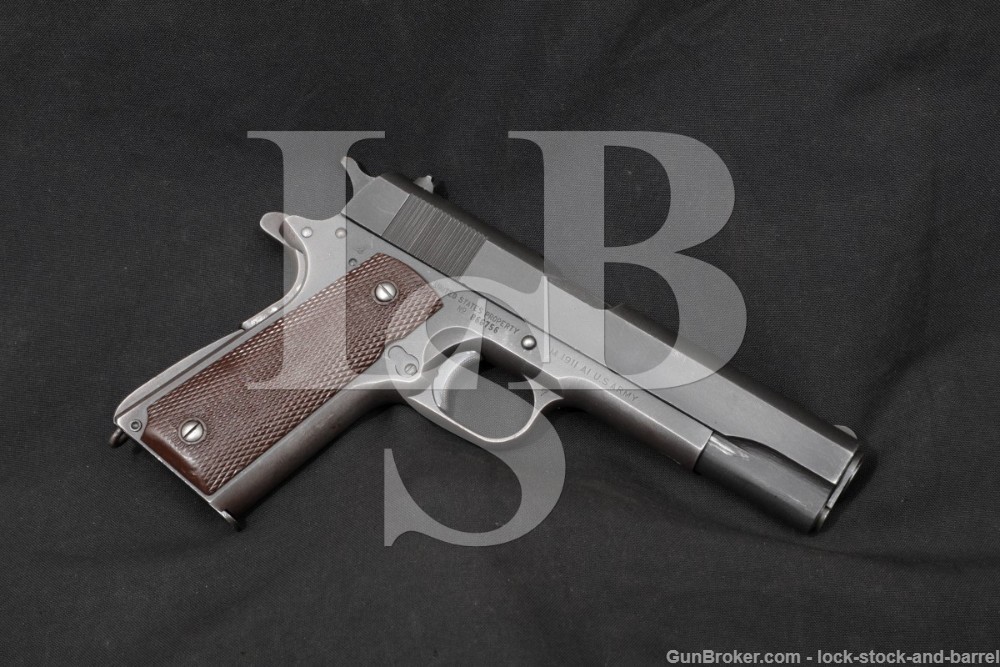 Markings: The left side of the slide is marked “ITHACA GUN CO., INC. / ITHACA, N.Y.”. The right of the frame is marked “UNITED STATES PROPERTY / No 866756”, “M 1911 A1 U.S. ARMY” and behind the grip with an Ordnance wheel. The top of the slide is marked “P” in front of the rear sight. There is a smaller “P” behind the magazine release. The left of the frame has “FJA” behind and above the trigger. There are flaming bomb ordnance marks on the rear of the slide under the firing pin plate and the inside of the dust cover at the rear. The right of the trigger guard is marked “7”.

Stock Configuration & Condition: The grips are checkered brown plastic with reinforcement rings around the screws and reinforcement ribs on the inside. The grips have light handling wear with some scattered minor nicks, scuffs, scratches, and tool marks in the reinforcement rings. There are no chips or cracks. The checkering is generally well defined with a patch of slightly smoothed checkers on the right panel toward the rear. Overall, the grips are in about Very Good-Fine condition.

Bore Condition: The bore is light gray with well defined rifling, sharp where not interrupted by erosion. There is light erosion scattered through the bore.

Overall Condition: This pistol retains about 87% of its metal finish. The finish is thinning at most edges. There is handling wear in the grip areas. There are some scattered light scuffs and scratches, including under the slide stop. The action shows light operational wear. The screw heads are sharp. The markings are clear. Overall, this pistol is in about Very Good-plus condition.

Box, Paperwork & Accessories: This pistol comes with a single blued 7-round magazine marked “L” on the top of the floorplate. The magazine has some scattered finish wear, mostly around spots of light surface erosion which have been scrubbed out. The feed lips are intact and the magazine is strong, in about Good-Very Good overall condition.

Our Assessment: The 1911 and 1911-A1 pistols served the military of the United States from 1911 to 1985, through two World Wars and the Korean and Vietnam wars. They gained a reputation as a reliable handgun with plenty of stopping power, and are held in high regard by those who have used them. As in the Great War, production demands of WWII required many manufacturers to produce military equipment for the war effort. Interestingly, Ithaca Gun Co. was the only maker of the 1911A1 pistol, apart from Colt, which made firearms before the war. This example of an Ithaca 1911A1 is from the first serial block assigned to the company, and has early features such as a nice Du-Lite finish, no model marking on the right of the slide, and checkered mainspring housing. The pistol is in about Very Good-plus condition with 87% of its original finish remaining. The bore is light gray with mostly sharp rifling and some light erosion. This pistol should garner a lot of interest from the collectors of WWI and WWII pistols, and 1911s in particular. Please see our photos and good luck!