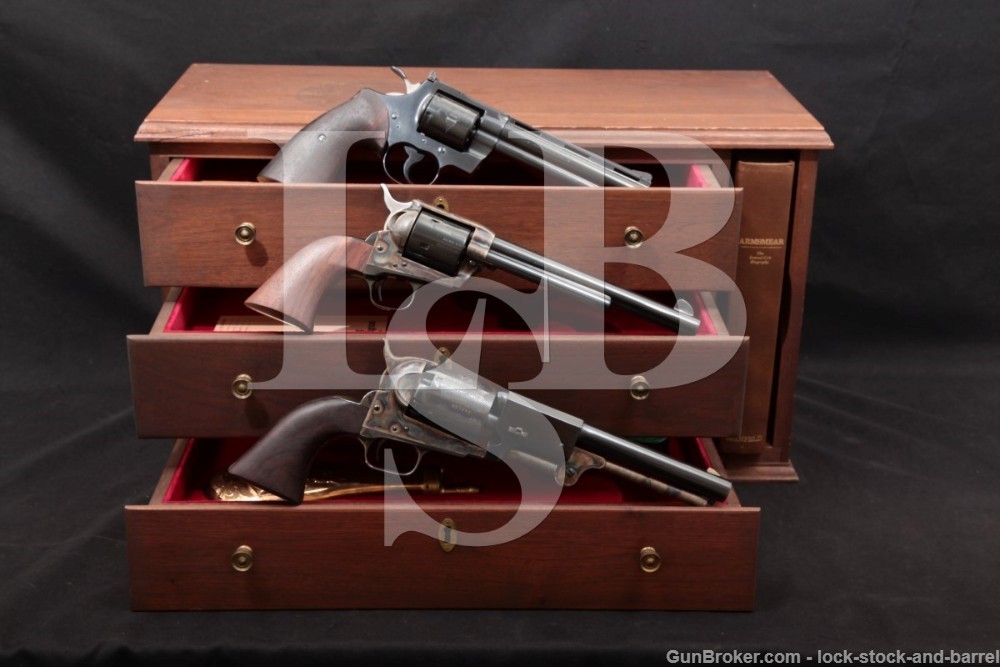 Bore Condition: The bores are bright with sharp rifling. There is no erosion in any of the bores .

Dragoon: This revolver retains about 99% of its metal finish. The silver plate on the grip frame has darkened slightly but will polish bright. There is no notable wear or damage, only light handling marks. The screw heads are sharp. The markings are clear. Overall, this revolver is in Excellent condition.

Single Action Army: This revolver retains about 99% of its metal finish. The cylinder shows extremely faint turn-wear, not through the finish. Otherwise, there are only light handling marks. The screw heads are sharp. The markings are clear. Overall, this revolver is in Excellent condition.

Python: This revolver retains about 98% of its metal finish. The cylinder has a thin, light turn line. Otherwise, there are only light handling marks. The screw heads are sharp. The markings are clear. Overall, this revolver is in about Excellent condition.

Box, Paperwork & Accessories: The Original Factory Wood Three-Drawer case is included. Each drawer is velvet lined and locks (no key included). The Dragoon’s drawer includes a powder flask, bullet mold, cap tin and nipple wrench. The Python comes with a Colt branded sight adjustment tool. Also in the case is a leather bound book, marked “ARMSMEAR” on the spine. This book is “The Home, the Arm, and the Armory of Samuel Colt. A Memorial.” The case has some scattered minor storage wear with a repaired chip loss at the left-front corner on the top, in about Very Good-Fine condition.

CA Legal or CA Private Party Transferable (THIS SECTION DOES NOT APPLY TO OUT-OF-STATE RESIDENTS): This set is C&R eligible and CAN be sold as a dealer sale in California. It CAN be transferred as a Private Party Transfer (PPT) as our Simi Valley location. All C&R firearms must be transferred through your local dealer OR at our Simi Valley location; we cannot ship directly to a C&R holder in California. Out of state residents can disregard this section – your local laws apply.