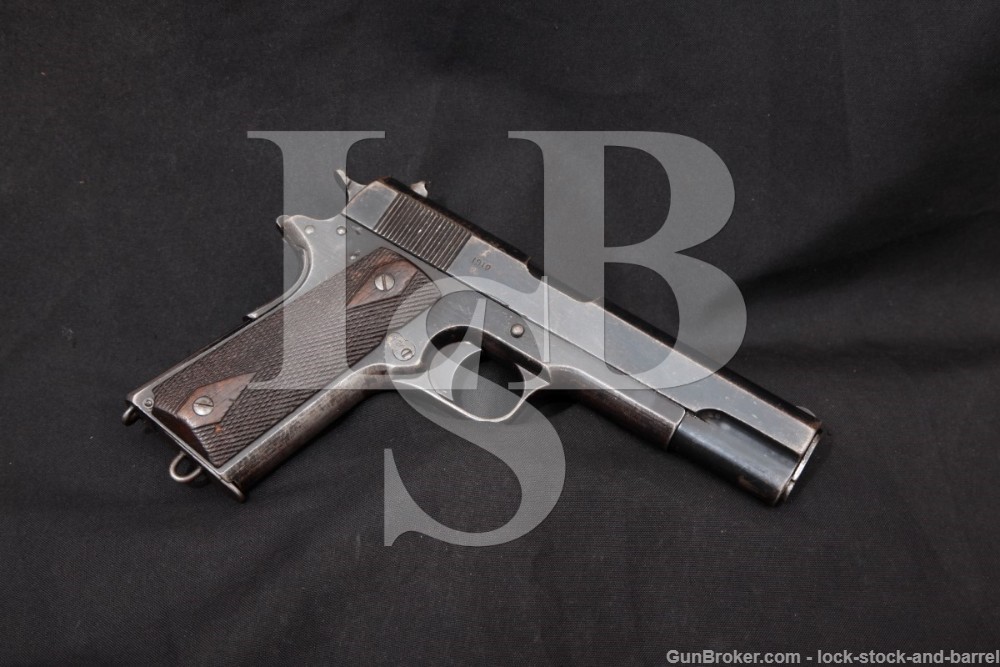 Stock Configuration & Condition: The grips are checkered hardwood with smooth diamond shapes around the grip screws, and the left grip is cut-out at the top front for clearance for the slide release. The grips have light-moderate handling wear with some scattered nicks, scuffs, scratches and a more notable ding on the right panel in front of the bottom diamond. There are no chips or cracks. The checkering is generally well defined. Overall, the grips are in about Good-Very Good condition.

Bore Condition: The bore is a gray with well defined rifling. There is light erosion and some minor pitting scattered throughout the bore.

Overall Condition: This handgun retains about 65% of its metal finish. The finish is thinning at all edges. There is scattered light finish wear throughout with more notable handling wear in the grip straps. There are several scattered light nicks, scuffs and scratches. Worn and scratched areas show some discoloration from oxidation. There is some marring on the front of the barrel bushing. The action has operational wear. The screw heads are tool marked with strong slots. The markings are generally clear, the marking under the year on the right of the slide appears poorly struck. Overall, this pistol is in about Good-plus condition.

Mechanics: The action functions correctly. The slide has minor play to the frame. The trigger pull is crisp. We did not fire this handgun. As with all used firearms, a thorough cleaning may be necessary to meet your maintenance standards.

Box, Paperwork & Accessories: This pistol comes with one 7 round magazine which has a lanyard ring on the floorplate. The magazine has a dent on the right toward the bottom, moderate finish wear, some minor surface oxidation, intact feed lips and a strong spring, in about Good-plus condition.

Our Assessment: In the early 1900’s, the Norwegians were looking around for a pistol to replace their aging Nagant revolvers. They held several commissions to evaluate pistols, but they all came back recommending Browning-designed Colts, at first the Model 1902 in .38 ACP and finally the Model 1911. The Norwegian parliament kept refusing funding for the pistol, holding out for a “homegrown” design. They finally gave up in 1914 and allowed the 1911 to be adopted. Norway held discussions for Fabrique Nationale, Browning’s representative in Europe, to secure a license to produce the pistols in Norway. Production finally began in 1917 with a few hundred produced. In 1918, a few slight changes were made, which resulted in a slide release that was both extended and lowered, which makes one wonder “Why didn’t we think of that?”. The Norwegian armed forces liked them so much that production continued up to WWII and even during Nazi occupation during the war. Those surviving WWII were kept in service until they were replaced by the Glock P80 in 1985. To add further value to these guns, the Kongsberg Colt and the Argentine Model of 1919 are the only two legitimate licensed copies of the Browning designed Colt 1911 that were produced out of the country. This pistol is a quite early production example with a slide date of 1919 and a serial number under 1,000. It’s The pistol has matching serial numbers on all of the numbered parts. This is a very nice find for collectors of European firearms and for those of Scandinavia in particular. There weren’t that many made, making any that survived to today a rare find. Please see our photos and good luck!

CA Legal or CA Private Party Transferable (THIS SECTION DOES NOT APPLY TO OUT-OF-STATE RESIDENTS): This C&R Pistol CAN be sold as a dealer sale in California but CANNOT be transferred as a Private Party Transfer (PPT) as our Simi Valley location. All C&R firearms must be transferred through your local dealer OR at our Simi Valley location; we cannot ship directly to a C&R holder in California. Out of state residents can disregard this section – your local laws apply.