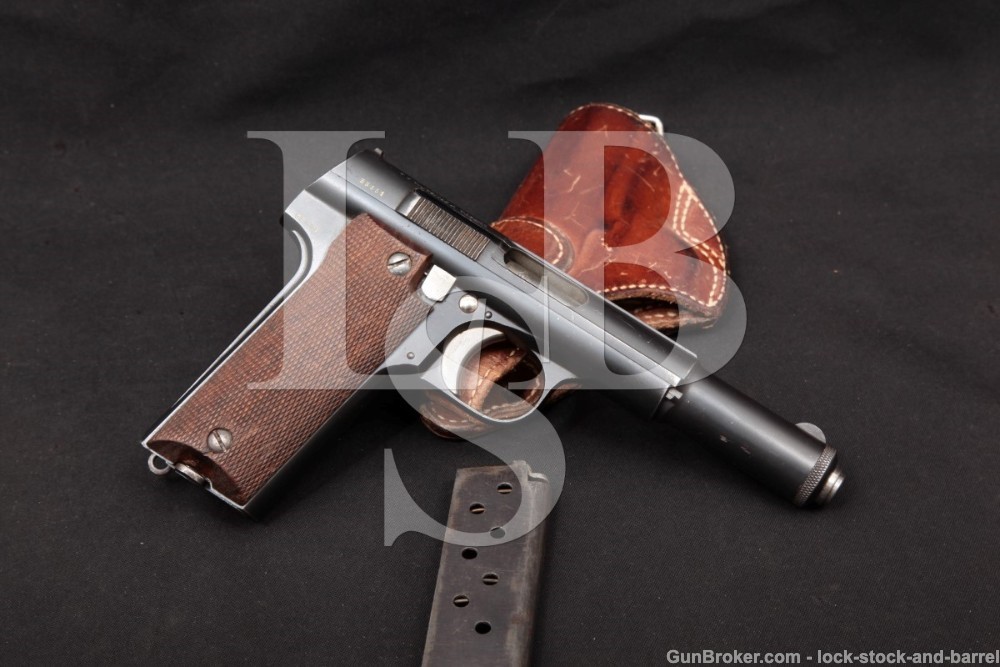 Stock Configuration & Condition: The grips are two-piece checkered wood panels. The grips show scattered compressions, tool marks around the grip screws and a few light scratches. The checkering is generally well defined. There are no chips or cracks. Overall, the grips are in about Very Good condition.

Bore Condition: The bore is gray, the rifling is sharp where not interrupted by erosion. There is light erosion and minor pitting scattered through the bore.

Overall Condition: This handgun retains about 87% of its metal finish. The finish is thinning at all edges. There are several light nicks and scratches scattered throughout with infrequent spots of very minor surface oxidation. The screw heads are tool marked with strong slots. Most markings are clear, some of the proofs are poorly struck or struck with worn dies. Overall, this pistol is in about Very Good condition.

Mechanics: The action functions correctly, and has both manual and grip safeties and a magazine disconnect. The slide is tight to the frame barely perceptible play. The single action trigger has a bit of creep. We did not fire this handgun. As with all used firearms, a through cleaning may be necessary to meet your maintenance standards.

Box, Paperwork & Accessories: This pistol comes with a brown leather Bianchi #13 thumb-snap holster and a total of two 8-round magazines. The holster has provision for both belt and shoulder-rig mounting with scattered light-moderate wear, a few torn stitches in the thumb-strap and some discoloration from age and oil, in about Good-Very Good condition. The magazines have scattered finish wear and light surface erosion with intact feed lips and strong springs, in about Good-Very Good condition.

Our Assessment: This pistol is a blowback operated 9mm semi-automatic made by Unceta y Compania in Spain and marketed as the Astra Model 600. The pistol was built at the request of the German military, who wanted a pistol chambered for the shorter 9mm Para. instead of the 9mm Largo as used in the Astra Model 400 pistols they had already been buying. The Model 600 was based on the Model 400, but slightly smaller. Production started in 1943 and between the 16th of May & 16th of July 1944, 10,540 Astra 600 pistols were delivered to the German military across the Spanish/French border. Another 28,000 had been purchased but the allied advance in France prevented their delivery. Only the first 10,540 have German acceptance stamps. After the war, Unceta finished the rest of the contract and the West Germans issued them to their police force. A batch of brand new pistols still not paid for by the Germans was immediately offered for export to Portugal, Chile, Turkey and Jordan, with the Spanish civilian market absorbing a small quantity. This pistol doesn’t have any government markings, so its history is uncertain, but it was likely produced after the supply lines between France and Germany were closed by the Allies. The pistol is in about Very Good condition with about 87% of its original finish remaining. The bore is gray with well defined rifling, with light erosion and minor pitting scattered through the bore. The slide is tight to the frame. This pistol probably didn’t see wartime use by the Germans but it still represents an interesting piece of history, as only a little over 55,000 were ever produced, making them somewhat rare. If the collectors of WWII and German weaponry don’t show enough interest, this pistol can be used for informal target shooting. We suspect the recoil is a little sharp with its blowback action, but it would appear heavy enough with its all steel frame to absorb most of the recoil, it ought to be a lot of fun to shoot. Please see our photos and good luck!