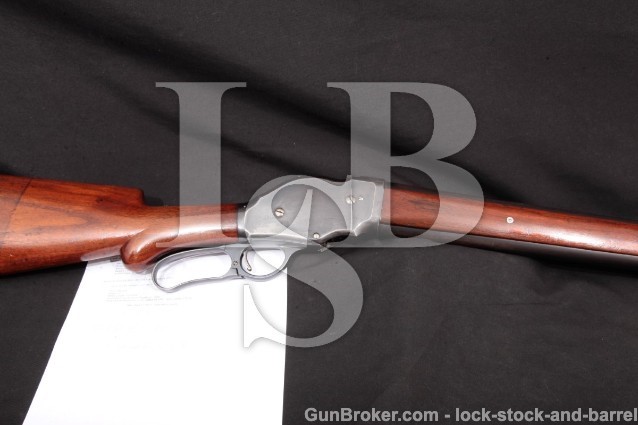 Sights / Optics: The shotgun is mounted with a single brass bead front sight.

Stock Configuration & Condition: The stocks are smooth walnut with a pistol grip, checkered metal butt plate and a two piece forearm. The forend has some bruises on the left panel with only light marks on the right. The finish is thinning throughout the forend. The buttstock has discoloration at the rear consistent with a slip-on or tie-on pad or cover and scattered light marks. There are no chips or cracks. The LOP measures 12 3/4” from the front of the trigger to the rear of the butt plate. The plate has worn through the finish in the raised portion but still has finish remaining in the checkering which is still well-defined, almost sharp. The plate is in about Very Good condition. The stocks rate in about Very Good overall condition.

Bore Condition: The bore is bright. There does not appear to be any erosion though there is some stubborn fouling which should clear out with a patient cleaning.

Mechanics: The action functions correctly. We have not fired this shotgun. As with all used fierarms, a thorough cleaning may be necessary to meet your maintenance standards.

Box, Paperwork & Accessories: A Cody search letter is included and confirms all features and shipment date.

Our Assessment: The Winchester Model 1901 was an improved version of the Model 1887 made only in 10 gauge. The action of the 1887 was not considered strong enough for smokeless powders, leading to the production of the 1901. Additionally, a  two piece finger lever with a trigger block to prevent accidental discharge was added. The gun was only produced with 32″ barrels and only in 10 Ga. as to not compete with the 12 Ga. Model 1897. In its day, it was largely considered a “goose” gun and popular with some of the commercial hunters. Today it is more of a curiosity, and an uncommon one at that. Only about 13,500 were manufactured before Winchester discontinued the lever action in favor of the slide or pump action repeating shotguns. It was designed to shoot 2 7/8” 10 gauge smokeless shells.

This is an especially nice example of the gun and is one of the first 1,000 produced. With serial numbering beginning at 64,856, this is a very early gun. And with only 897 made in 1902, it is a fairly rare gun. As a Winchester, a lever action shotgun, and a model which was not produced in great numbers, this piece has a great deal of collector value, especially with so much of its original finish and its nice bore. We do not recall handling a better 1901. Please see our photos and good luck!

CA Legal or CA Private Party Transferable: This shotgun can be transferred in California and is C&R eligible, though as of 1/1/2015 a C&R cannot receive direct shipment of a C&R in California.

On the top of the barrel at the front, there is a patch of white paint transfer. We apologize for missing this in the initial description.